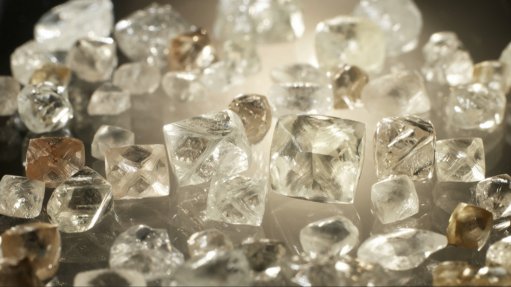 VANCOUVER (miningweekly.com) – Canadian diamond producer Stornoway Diamond Corp reveals that ongoing diamond breakage in the Renard process plant are reducing the proportion of larger diamonds available for sale and dimming revenues, while market sentiment for Renard’s precious gems is on the up.

The Longueuil, Quebec-based company said on Wednesday that volatility in the proportion of small diamonds in the sales mix is also weighing on the top line, at a time when sales show a 19% increase (expressed in real terms after accounting for size distribution and quality variations) in pricing, since sales started in November 2016, the company advised.

It said the rough market has strengthened “modestly” during the second quarter, and that the size of the increase reflects the growing acceptance of the Renard diamond production by Stornoway’s tender sale clientele.

Since ore processing at Renard started, the project has experienced high levels of diamond breakage. This has manifested most directly in the proportion of larger diamonds recovered, and in the average quality profile. Both factors negatively impact the achieved average diamond price at sale.

“While breakage continues at unsatisfactorily high levels, good insight has been achieved on the location and cause of the issue by Stornoway’s processing staff and team of independent experts. Breakage occurs in all diamond processing plants, and can be successfully mitigated,” the company said in a statement.

Further plant modification measures aimed at reducing the breakage and producing higher-quality diamonds are under development and will be released along with Stornoway’s second quarter financial results in August.

RENARD REVVED-UP
Stornoway has now completed the ramp-up of its 6 149 t/d Renard diamond operation ahead of schedule. Construction on the project started on July 10, 2014, and the company declared commercial production on January 1, this year.

Quebec’s only diamond operation, Renard produced 417 362 ct from processing 512 005 t of ore during the June quarter, at an attributable grade of 82 carats per hundred tonnes (cpht).

The market rewarded the company on Wednesday, pushing its TSX-listed stock 4% higher on Wednesday, adding C$0.03 a share to C0.79 apiece.

Renard averaged a processing rate of 6 149 t/d in June, topping the plant’s nameplate capacity and marking completion of the project’s production ramp-up on time according to its revised and expedited construction plan.

Stornoway sold 350 159 ct in two scheduled sales during the June quarter, for gross proceeds of C$40.9-million, at an average price of $87/ct.

Meanwhile, the company also reported that a subsequent sale of 151 135 ct in the current quarter raked in gross proceeds of C$19.8-million, at an average price of $101/ct.

“With seven sales now completed, we are encouraged by strong growth in diamond pricing, reflecting the underlying market demand for the Renard product. This is despite the ongoing issue of diamond breakage which is impacting our production’s quality and size profile,” president and CEO Matt Manson stated.

STACKING ISSUE
Stornoway also disclosed that is has made modifications to the method of handling and disposing of its processed kimberlite (PK). Where it used to be de-watered with centrifuges for trucking to a dry-stack disposal site, high moisture content in the PK has reduced its competence for stacking, and made disposal cumbersome, the company said.

Going forward, fine PK will be pumped for disposal in a modified wet containment facility, with water outflow collected and treated at the existing water treatment facility.

The company has submitted a modification to the mine’s operating permit and is under review. Stornoway expects to start the modified form of PK disposal shortly.

While these changes have been completed within the sustaining capital budget for 2017, it is expected to remove a significant bottleneck for future Renard plant expansion.