Space mining is getting close to reality 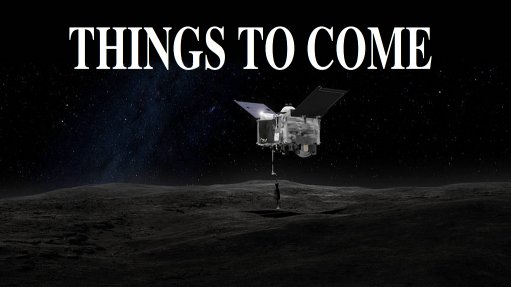 Space mining – the mining of bodies and other worlds in outer space for minerals and other natural resources – remains within the realm of science fiction. For now. But, during the younger years of most of the world’s current senior mining executives, personal communication devices (cellphones) were science fiction, as were a whole plethora of compact electronic and domestic devices that are today widely available, affordable and, indeed, nearly ubiquitous. It is very likely that, within the remaining life spans of those self-same senior mining executives, space mining will become a scientific, technological, engineering and financial fact.

Largely, if not totally, unnoticed by the terrestrial mining sector, a US National Aeronautics and Space Administration (Nasa) probe, OSIRIS-REx, is currently cruising through space en route to a rendezvous with a near-earth asteroid (NEA) named Bennu (previously designated 1999 RQ36). Launched in September 2016, OSIRIS-REx (the name is an acronym for Origins Spectral Interpretation Resource Identification Security – Regolith Explorer) will rendezvous with Bennu in August 2018, subject it to a detailed survey (involving mapping the chemistry and mineralogy of the asteroid), including the identification of sample collection sites. This will take more than a year. Then the spacecraft will approach very close to Bennu, extend an articulated arm, and take a sample of the asteroid’s loose surface material (regolith), including dust that covers solid rock. OSIRIS-REx will be able to do this three times (with the sampler arm touching the surface for about five seconds each time) and, hopefully, obtain samples totalling 60 g to 2 000 g. The spacecraft will break away from Bennu in early 2021, reaching earth in 2023, when it will release its sample return capsule, which will land in a test and training range in Utah. The length of the mission was determined using earth’s gravitational field to help propel it to and from its target. (OSIRIS-REx is not the first asteroid sample return mission; that honour belongs to the Japanese Aerospace Exploration Agency’s Hayabusa probe 25143 Itokawa. However, the material retrieved by Hayabusa and returned to earth in 2010 totalled 1 500 particles, mostly less than ten micrometres in size and weighing micrograms.)

The OSIRIS-REx asteroid sample collection and return mission are obviously far removed from an asteroid mining mission. But, equally obviously, many of the technologies, procedures and processes required for asteroid mining will be tested and most probably proven by OSIRIS-REx. Moreover, Nasa has awarded a number of contracts for the development of technologies intended to facilitate NEA mining. Under the Nasa Innovative Advanced Concepts programme, Nasa has awarded US company Deep Space Industries (DSI) a contract to develop an aerobrake system to slow down spacecraft carrying materials mined from an asteroid. An aerobrake system uses the earth’s atmosphere, and not retrorockets, to slow down a spacecraft; consequently, the aerobrake also has to act as a heat shield. DSI’s concept is to use microwave sintering to manufacture an aerobrake/heatshield from regolith collected from the asteroid, as the mining ship returns to earth. DSI has also received a Nasa contract to research ways to produce spacecraft propellants from asteroid material.

In addition, DSI is developing its technology demonstrator, low earth orbit spacecraft, Prospector-X, cofunded by the company and the Luxembourg government. This will be followed by the small (50 kg mass) Prospector-1 NEA survey spacecraft, which will land on a preselected asteroid. (Prospector-X could be launched before the end of this year, or early 2018; Prospector-1 should launch in 2020.)

Another company focused on asteroid mining is Planetary Resources. In 2020, this enterprise plans to launch a number of spacecraft on a single rocket to undertake exploration missions. Each probe will be powered by an ion-propulsion system and visit a preselected target asteroid. Their prime objective will be to find water. Each spacecraft will undertake preliminary mapping of its asteroid and identify areas of interest; it will then deploy four surface probes to determine water content at these points. The asteroid with the highest water content will be selected for future mining. Planetary Resources describes this programme as “the world’s first commercial deep-space exploration mission”.

Planetary Resources has tested the prototype communications and control systems for its reconnaissance probes on its very small (4 kg mass) Arkyd-3 satellite, launched from the International Space Station in 2015. Improved communications, control systems, other elec- tronics, plus sensors, will be tested on the larger Arkyd-6 satellite (which is still very small, being a ‘six-unit’ CubeSat, with a reported mass of 10 kg), which is now ready for launch and could enter space before the end of this year, or early 2018. The actual space probes will be designated Arkyd-301. The company’s long-term plans also include mining asteroids for structural and precious metals.

Quite separately, another private-sector US enterprise, Moon Express, is aiming to bypass NEAs and go straight to the Moon. (Moon Express is an industry partner of Nasa and benefits from technical support from the agency.) In 2018, it will launch its initial MX-1E Lunar probe – the first commercial mission to the moon. With this, the company hopes to win the $20-million Google Lunar X-Prize. A compact craft, the MX-1E will have a total mass of 250 kg, including a payload of 30 kg. It will carry instruments but is intended to prove the concept of cost- effective commercial space exploration and will land in the moon’s equatorial region. It is planned to be followed in 2019 by a second probe, which will land at the lunar South Pole and prospect for water and useful minerals. Then, in 2020, a third mission will also land at the South Pole to collect samples and return them to earth.

So the technologies needed for space mining, whether of NEAs or on the moon, are now being actively developed. International market analysis company BMI Research (part of Fitch Group) believes that space mining will become a reality during the next 20 years. “Space mining will become increasingly mainstream within the next two decades as a necessary tool for the rapidly expanding space industry and a viable long-term solution to depleting ore reserves on earth,” it stated in the introduction to its ‘Industry Trend Analysis – Mining Final Frontiers: Space Mining Gaining Traction’. “Increasing levels of investment and innovation among private players will dramatically improve the cost efficiency of space missions, while government support continues to grow.”

The important point to make is that, currently, the primary focus of most, if not all, space mining projects is on supporting space exploration activities. This is why there is a primary focus on mining water (or, more pedantically, ice). Not only is water itself essential to life, it can be ‘split’ into its component elements, hydrogen and oxygen. (And there have recently been major advances in water-splitting technology). Not only is oxygen also essential for life, but hydrogen can be used as a propellent for spacecraft and in fuel cells (which can operate in a vacuum) to generate elec- tricity. If water, oxygen and hydrogen can be produced off the earth, then these elements do not have to be carried from earth into space (except in small quantities for the initial hours of the mission). This will greatly reduce the weight and volume required to be launched into space for manned missions, in particular those headed beyond earth’s orbit. And, in turn, this will greatly reduce the costs of manned exploration missions.

Likewise, the idea of mining metals on asteroids is initially focused on supporting manned missions to the moon and beyond. Metal asteroids are exactly that: they are composed of metals, not metal ores. Mining them is more akin to recycling scrap metal on earth than to terrestrial mining. It is much simpler, and, when coupled with a modern technology like additive manufacturing (three-dimensional printing), opens the way to manufacturing parts, components and even structures in space for use in building bases (whether on asteroids, on the moon or elsewhere) or in assembling interplanetary manned spacecraft. This, too, will greatly reduce the costs of interplanetary space missions and off-earth outposts.

So, space mining is no threat to conventional mining on earth – yet. But this situa- tion is not likely to continue indefinitely. Technological advances are already reducing the costs of producing spacecraft and promise to greatly reduce launch costs from earth. “Rapidly decreasing costs in spacecraft manufacturing will improve the potential cost efficiency of space mining, incentivising the entry of more players,” stated BMI Research.

“As space technology con- tinues to develop, traditional and nontraditional mining companies will eventually be able to take advantage of cost-efficiency improvements to begin mining for metals to bring back to earth,” affirmed the consultancy. “Considering our expectation that none of the main industrial metals will reach the record price ranges witnessed during the commodities boom prior to 2014 in the next five years, space mining will not be seen as a cost-effective alternative by traditional miners in the short or medium term. However, rapidly falling launch costs and the increasing scarcity of viable resources on earth mean it will grow in consideration over a multidecade horizon. Ore reserves depletion of various minerals is already an important challenge for significant mining powerhouses, including Australia, Russia, China and Canada.”

Moreover, space mining will not face the environmental opposition that alter- natives such as seabed mining or mining in the Arctic are likely to encounter. Indeed, it will also not face the pressures and opposition, on environmental, political and social grounds, that conventional terrestrial mining projects already face.

BMI Research stresses that, although all current space mining projects are private-sector endeavours, they are still heavily dependent on support by governments. Deep-space exploration missions are carried out by governmental and inter- governmental agencies. And, as already described, Nasa missions and funding are key to developing the required technologies.

The main constraint on space mining is most likely to be regulatory uncertainty, the consultancy believes. Currently, the legal framework for human activities in space is the 1967 Outer Space Treaty. This says that no body or territory in space can be “subject to national appropriation by claim of sovereignty, by means of use or occupation, or by any other means”. On the other hand, it does not forbid the occupation or use of bodies or territories in space. Indeed, the treaty explicitly states that countries are free to explore and “use” outer space, and the US has always clearly and officially stated that this means that any country or company can undertake mining operations in space. But other countries disagree.

So far, only the US and Luxembourg have passed legislation to regulate space mining. The US legislation was passed in 2015, and that of Luxembourg in 2017. BMI reports that the United Arab Emirates is consider- ing similar legislation. This suggests a trend is developing. Certainly, the potential of space mining to greatly cut the costs, or increase the scope of, manned and unmanned deep-space exploration suggests that all the major spacefaring nations are going to have to facilitate it, sooner or later – or give up on deep-space exploration.