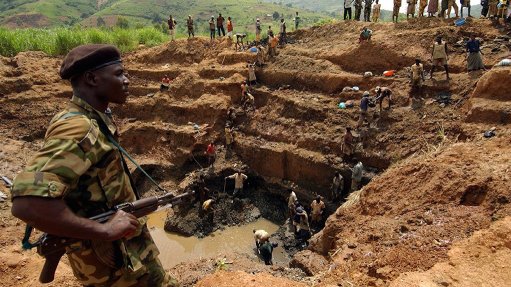 CONFLICT MINERALS It is critical that the trade in CAR’s natural resources be given a prominent role in efforts to find peace, as they have played a role in fuelling the conflict itself
Photo by: Global Witness

A new undercover investigation by international watchdog organisation Global Witness has uncovered how diamond smugglers are making use of social media platforms as they seek to get diamonds linked to the ongoing violent conflict in the Central African Republic (CAR) out of the country and into international markets.

The investigation, code-named ‘A Game of Stones’, reveals how the tools of the digital economy, including Facebook and WhatsApp, among others, are being used by the CAR’s traders to find international partners and evade the already limited scrutiny of international diamond markets.

Posing as a diamond trader, Global Witness went undercover, entering the murky world of the CAR’s traders, smugglers and middlemen. This year-long investigation showed first-hand how deals are done and agreements forged amidst continued violence and displacement in the diamond-rich country.

“In a poor and fragile country where diamond wealth should be flowing to the civilian population, too much profit is instead finding its way into the hands of those who are helping drive the conflict,” says Global Witness conflict resources campaigner Aliaume Leroy.

He believes that it is critical that the trade in the CAR’s natural resources be given a prominent role in efforts to find peace, as they have played a role in fuelling the conflict itself.

Global Witness says that it has been able to gain “unprecedented access” to those involved in smuggling diamonds out of the CAR. Sellers and middlemen work by tagging prospective buyers in Facebook posts before using private messaging services to build relationships and negotiate deals.

The Kimberley Process – set up to disrupt the trade in conflict diamonds – is currently trialling a new and innovative response to the trade in conflict diamonds from the CAR. The organisation says that, after suspending of the CAR’s diamond trade for several years, it recently announced a partial lifting of the suspension, aiming to permit trade from certain zones deemed compliant by observers.

“The CAR is precisely the kind of case the Kimberley Process was established to confront,” states Global Witness conflict resources campaign leader Michael Gibb. He asserts that the country cannot tackle the trade in conflict diamonds alone, stressing that diamond companies must take greater responsibility for building an industry that stops ill-gotten gains reaching the world markets.