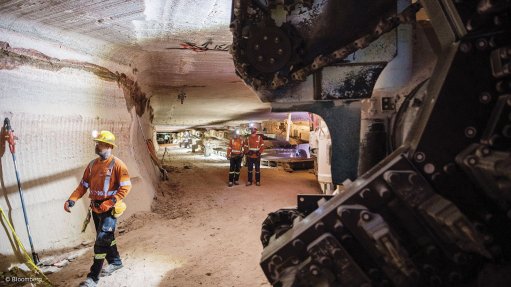 Canadian fertiliser company Nutrien last month gave a rare tour of its underground Cory potash mine, which is located some 20 km west of Saskatoon. Production of red potash resumed in January, following a period of slowed-down production and layoffs. The 375-employee minealso produces white variants of the soil fertiliser. In this picture, mineworkers are seen walking past the cutting head of a continuous boring machine at the mine, in Saskatchewan. Nutrien sees potash demand potentially reaching 75.5-million tons a year to 2023. The single-channel marketing system the world has allowed CanPotex to exercise has led to long-term value for Canadian producers.