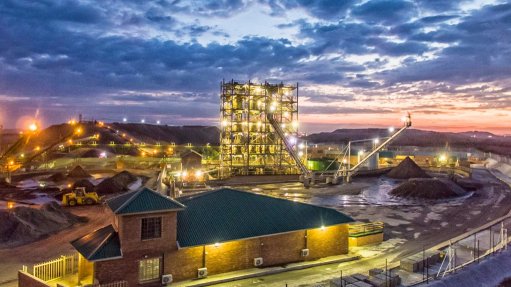 The miner’s operating environment this year, thus far, has been characterised by sociopolitical and economic uncertainty; however, the group reports that it is well positioned to navigate these challenges, both internally and externally.

This year’s first-quarter annualised adjusted Ebitda is the second-highest since the group was established, with the highest on record being the R68.6-billion ($4.6-billion) reported for 2021.

Domestically, the socioeconomic and labour environment remains a challenge for Sibanye, with the lockout of workers who are members of the Association of Mineworkers and Construction Union (AMCU) and the National Union of Mineworkers (NUM) at the miner’s South African gold operations.

This follows extended wage negotiations and a strike by AMCU and NUM members that is entering its third month.

In this regard, Sibanye says it is continuing to engage with organised labour to secure a fair and sustainable agreement, but will also not be coerced into above-inflation wage demands, which may impact on the sustainability of its operations and negatively impact other stakeholders.

While an employee lockout remains in place, Sibanye has suspended its guidance for the South African gold operations.

Sibanye’s capital expenditure for the first quarter was 62% higher year-on-year at R974-million ($64-million), primarily as a result of the R204-million ($13-million) project investment at the Marikana K4 project.

Total production from the South African PGM operations (excluding PoC) of 410 848 oz of 4E was 3% lower year-on-year, primarily as a result of a slower-than-planned return to work at the Marikana and Rustenburg operations after the December break.

Sibanye says its cost management endeavours, despite inflationary pressures, were again evident in the 6% year-on-year reduction in its all-in sustaining costs (AISC), including PoC, of R18 600/oz of 4E ($1 222/oz). This was mainly owing to reduced third-party PoC material purchases.

These cost management efforts from Sibanye’s South African PGM operations were maintained despite the impact of inflationary pressures affecting the mining industry globally, partially offset by higher credits received from the by-products sold as a result of increased metal prices and is in stark contrast to the double-digit cost increases reported by PGM industry peers during the past 12 months.

PGMs production of 49 518 oz from the Kroondal operation was 7% lower year-on-year, as a result of adverse ground conditions at both Kroondal East and West, which led to lower yields, particularly in March.

The openpit Klipfontein project is now fully ramped up and produced about 3 000 oz of 4E (metal in concentrate) in March on a 100% basis. This high-return, rapid-payback project achieved throughput of about 54 000 t milled (on a 100% basis) in March.

Attributable PGMs production from Mimosa in the period totalled 28 043 oz – 6% lower year-on-year, while PGMs production from Platinum Mile was 41% higher at 15 144 oz, as a result of additional surface tonnes added to the flotation output from the Rustenburg concentrator, resulting in a temporary boost to the yield.

The US PGM operations remained constrained by a Mine Safety and Health Administration Section 103 order, which was imposed after a fatality in June 2021.

Although the order was lifted on March 1 this year, production from the Stillwater West mine is expected to remain restricted as a result of self-imposed rail operating procedures that will remain in place until collision avoidance systems have been implemented.

An operational review to optimise operating output at the US PGM operations is ongoing and due for completion by mid-year.

Sibanye’s South African gold operations were impacted by various operational disruptions in the first quarter, with production from the Beatrix underground operations only commencing in February, after the suspension of all operating activities on December 3, 2021, to address safety concerns.

During the reinforcement of the tailings storage facility at the Beatrix operation, processing operations at Beatrix were suspended from December 28, 2021, with no ore processed or gold sold during the first quarter aside from minor amounts from the processing pipeline.

Subsequent to the notification of strike action and lockout of members of AMCU and NUM, operating activities across the gold operations ceased from March 9.

As such, the miner says its operating results from domestic gold operations for the first quarter are not comparable to previous periods.

Capital expenditure (capex) is forecast at R4.8-billion ($317-million), including R950-million ($63-million) of project capex on the K4 project.