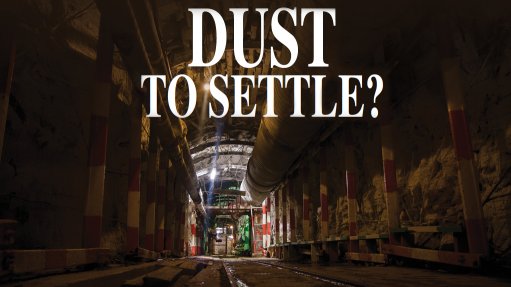 Mining companies facing a class action suit from mineworkers who developed silicosis on South Africa’s gold mines are expected to reach an out-of-court settlement before the close of the year. The class action, which was lodged in May 2016, comprises, according to attorney Richard Spoor, an estimated 100 000 former and current mineworkers who developed the disease while working in any one of the gold mines belonging to the respondent mining companies after 1965.

Speaking at this year’s Mining Indaba, in Cape Town, former Harmony Gold CEO and current Mining Industry Working Group on Occupational Lung Disease (OLD) chairperson Graham Briggs stated that the mining companies were in the process of working towards a settlement. “There have been some major gains in the discussions with the various groupings. There is no reason why we shouldn’t see a settlement sometime this year,” Briggs told delegates.

A settlement this year could be a significant victory for both parties, given that, in a case as complex as this one, the legal class action process could drag on for up to 15 years.

Silicosis is one of the industry’s most conspicuous legacies, with hundreds of thousands of mineworkers having succumbed to the occupational disease over the past century. It is caused by the inhalation of microscopic dust particles of crystalised silica – a mineral prevalent in South African gold orebodies – which, over an extended period, causes scarring of the lung tissue, making it difficult for the patient to breathe.

Silicosis is not only an incurable OLD, but is also difficult to completely prevent in certain types of mines, especially among career miners who spend between 20 and 30 years working on the gold mines, the Chamber of Mines’ (CoM’s) head of health, Dr Thuthula Balfour, tells Mining Weekly.

However, she adds that more modern dust incidence targets hold out hopes that this goal is substantially achievable.

“Part of the reason that South Africa has such a high rate of OLD is that our mining is labour intensive. The most certain preventive method is to take people out of mining and completely mechanise underground operations,” says Balfour.

However, the extreme depth and narrowness of South Africa’s gold-bearing reefs make the mechanisation of mining extremely difficult.

With little option of mechanising deep-level mines, the gold mining companies have to manage and minimise the dust generated as a result of mining activity as effectively as possible. The chamber has a number of initia- tives on reducing dust exposure. Currently, this is done mainly through the Mining Industry Safety and Health (MOSH) Learning Hub.

In addition, in 2014, five of the gold mining companies, either historically or currently active in gold mining, formed the OLD working group with the primary objective of addressing issues relating to the monitoring and medical care of mineworkers, and compensation paid to those infected. The number of companies has since grown to six and includes Sibanye Gold, Harmony Gold, Gold Fields, AngloGold Ashanti, Anglo American and African Rainbow Minerals.

Given that the business of mining involves the extraction of metals and minerals from the earth, the fundamental task of the mining companies is effective management of the dust, Briggs told Mining Indaba delegates.

“The gold mining companies have been working very hard from a technological perspective and have introduced new initiatives that have reduced dust levels in the mines,” said Briggs.

In fact, since 2012, the gold mines have achieved a combined reduction in dust loads from 0.282 mg/m3 to under 0.1 mg/m3. This means that, during an average eight-hour shift, the amount of dust, which includes microscopic silica particles, present in the air has been reduced from 282 μg/m3 to about 100 μg/m3 of air. Incidentally, 2012 was the year that saw a significant improvement in the accurate sampling of dust sampling measurements, following the introduction of a new generation of silver membrane filters used in full-shift dust samplers.

Sibanye is one of the working group companies that are leading the way in the unrelenting battle against dust exposure in the mines. Since its establishment in 2013, the company has implemented a number of new technologies and initiatives at its four gold operations on the West Rand and in the Free State

Speaking to Mining Weekly on behalf of the working group, Sibanye Gold’s head of environmental engineering, Vijay Nundlall, explains that, at every point in the mine, from the rock face to the processing facility, there is potential to create dust. “The ideal strategy would be to design out the risk completely; however, with silica dust, designing out the risk is almost impossible. The only strategy we can pursue is to keep the entire process damp so that we don’t create dust.”

Nundlall emphasises that no single intervention is able to effectively manage and reduce dust, as a result of which the mines rely on a combination of technologies.

The most basic, but essential, of these is the watering down of working spaces to prevent the generation of dust. “While this is an embedded practice, we can still do more in terms of ensuring the effectiveness of the process,” admits Nundlall. The latest improvement to be effected in this regard is the addition of a mechanical flow control on the hose nozzle to control the flow of water.

Other effective initiatives employed on the mines include the treatment of mine ways with a bonding agent so that the dust that is generated during the conveyance of ore within the mine will bond to the footwall, or floor. Stope atomising sprays, which wet down all production zones at the start of each shift, have also been installed. Similarly, haulage sprays have been installed that spray water when a dust cloud is detected in various production zones. Finally, winch and tip covers are used to provide cover on the winches that naturally generate dust while in operation.

All these technologies are continually being investigated to determine where improvements and efficiencies can be made, says Nundlall.

The bulk of this research and development is directed by the Mine Health and Safety Council (MHSC), which is mandated to conduct such investigations on behalf of the mining companies.

All CoM member companies also bene- fit from the MOSH process, which seeks to find leading practices in the reduction of dust exposure and transfer that knowledge and practice to other mines to adopt. Some of the pictures indicate leading practices that have been developed at a source mine (where the practice was initiated) and made available for adoption through the MOSH process.

While the reduction of dust from a technological perspective is paramount, the education of mineworkers on the nature and risks of OLD is also essential.

“One of Sibanye’s initiatives that seems to be catching on with the other mines is the installation of a health room at each operation.” Nundlall elaborates that, in these rooms, the company provides health and safety training for small groups of workers at a time, where they can be educated or reminded of the risks and hazards of working underground.

“While a mining company, as an employer, has the statutory duty and duty of care to engineer out all risks, it is also the responsibility of the workers to use and implement all the control measures that have been instituted on the mines for their own health and safety.”

He admits that there are occasions when workers contravene safety regulations, such as not wearing the dust masks that are provided. However, Nundlall insists that workers are well informed about the nature of OLDs and how they develop, as a result of which the level of noncompliance on the mines is low.

Given the significant expense and time incurred in implementing new technologies and engineering new designs to further limit dust generated during the mining process, it can be argued that such endeavours will not be pursued on a purely altruistic basis. To continually work towards a healthier working environment, the MHSC has implemented targets to cap silica dust exposure in South Africa’s gold mines. The latest targets were renewed in 2014 and compel all gold mining companies to achieve a 95% exposure measurement level of 0.05 mg/m3 for respirable crystalline silica by 2024.

“The effort to achieve the new target is far tougher and more expensive. The level of control that is required to halve the target, in terms of engineering control, is far more expensive and tougher. However, in my own experience, and having seen data, there are mining units that are close to or have achieved the targets already”, concludes Nundlall.