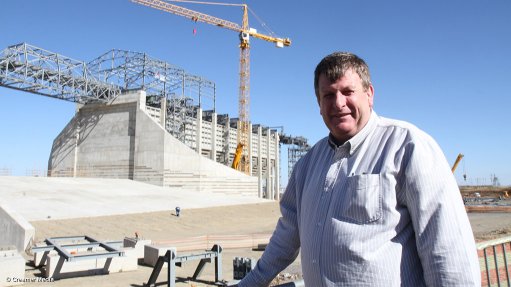 SECUNDA (miningweekly.com) – A sweeping R15.3-billion project that will replace three of petrochemical group Sasol’s ageing coal mines across the Secunda coalfields of Mpumalanga continues to advance within budget and will, once fully completed in 2016, supply the group’s nearby Synfuels complex with 42-million tons of coal a year for the next 35 years.

Noting that the group’s Twistdraai, Brandspruit, Middelbult and Syferfontein reserves were nearing the end of their economically mineable life, Sasol Mining senior VP Peter Steenkamp told journalists during a tour of the sprawling complex on Wednesday that the mining of the remaining available reserves remained the most viable way of securing coal supply to the adjacent Synfuels operation.

According to a 2013 report, total extractable run-of-mine reserves in the Secunda area totalled 1.3-billion tons.

“The cost of keeping the old mines going was high owing to old, expensive conveyer belt systems, but mining the reserves in Secunda is still the cheapest way of producing coal…even though they need to be underground and deep,” he said.

He added that sourcing coal from its own mining operations, rather than relying on a third-party source, also provided Sasol with flexibility of supply, while maintaining reliability and sustainability.

In addition, an upgrade project at the Syferfontein mine would provide high-wall access into the newly acquired Block IV reserves.

The overall project would result in the construction of three 65 t payload mining shafts and three 2 700 t/h incline shaft systems, as well as several coal-handling facilities and 66 km of conveyer systems.

MINE REPLACEMENT
Construction of the new 10.5-million-ton-a-year Thubelisha mine started in March 2009, with first production achieved in January 2012.

The R3.2-billion operation had 12 production sections and a shaft depth of 160 m, while a 17-km-long conveyer system transported 2 500 t/h of coal to the nearby Synfuels complex.

Once complete, the 10.5-million-ton-a-year operation would boast 13 production sections and reach a shaft depth of 235 m.

To the north of Impumelelo, the new Shondoni mine, which would replace the ageing Middelbult operation, was currently about 63% complete and would eventually reach a depth of 150 m and deliver up to 10.5-million tons a year of coal.

First production from the R3.09-billion mine was expected in January 2016 and would be delivered to the Synfuels operation via a 21-km-long 2 400 t/h conveyer system.

The Syferfontein mine would, meanwhile, be extended at a cost of R1.4-billion to include a high-wall access into Block IV.

Construction on the project started in May 2013 and would likely be completed by July, delivering a 7.2-million-ton-a-year mine. The project would also see the construction of a 4 800 t/h, 1.5-km-long coal conveyer system.