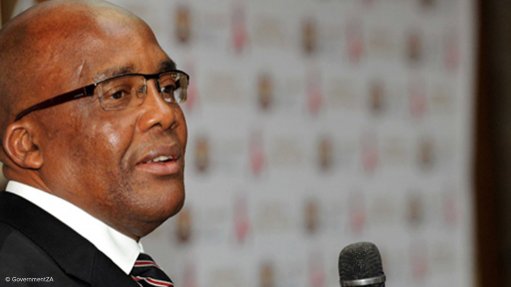 JOHANNESBURG (miningweekly.com) – South Africa’s status as the country that has one of the highest number of tuberculosis (TB) cases worldwide has put a spotlight on efforts to arrest and reverse the number of people living with the 100-year-old disease, thereby realising economic benefits of about R13-billion.

With South Africa in a state of “health emergency”, focus has turned to screening about 500 000 mineworkers and the 600 000 residents of peri-mining communities for indications of TB and the implementation of a number of regional preventive and treatment initiatives, Health Minister Aaron Motsoaledi said on Tuesday.

The R500-million initiative, funded by the Global Fund to Fight Aids, TB and Malaria, would also screen about 150 000 inmates across South Africa’s 242 correctional facilities for TB.

Speaking in Sandton at a regional Ministerial meeting aimed at harmonising the response to TB in the Southern Africa mining sector, he said mineworkers and prison inmates would receive verbal screening noting any chest pains, coughing or weight loss, besides others, before having tests using the GeneXpert technology.

"Those that are found positive will start treatment," Motsoaledi said, noting that health teams would undertake follow-up consultations with family members of those found to have TB.

With an aggressive testing and treatment initiative, South Africa could bring down its TB incident rate to 1 000 people by 2029.

This would be a significant decline, despite remaining above the WHO threshold, World Bank human development sector leader Patrick Osewe said.

TB in the mining sector was a particular challenge as TB in mining communities was generally higher than in the general population, said Deputy President Kgalema Motlanthe, who also spoke at the regional Ministerial meeting.

People with silicosis were six times more likely to contract TB, while those with HIV/Aids carried three times the risk.

“Mining also has a large impact on internal and cross-border migration and so the impact of TB in mine-linked communities is felt much more acutely than it is in the population at large,” Motlanthe added.

Osewe noted that 60% of the nation’s mineworkers were from South Africa, mostly from the Eastern Cape, while the remaining 40% migrated from countries such as Swaziland, Lesotho and Mozambique.

Motlanthe added that TB in the mining sector was “not just a health issue”, but an economic, labour, social and development issue.

“This disease, which is the leading cause of death in our country, has a huge impact on workforce productivity and operational costs in an industry that contributes almost 20% to South Africa’s gross domestic product,” he pointed out.

Osewe said Africa was the only region not on track to achieve a 50% cut in the number of TB cases, as stipulated by the Millennium Development Goals.

The fight against TB was also complicated by the fact that, while TB was a health issue, it was linked to labour issues, governed by the mine, health and safety regulations of the Department of Mineral Resources that regulated mining carried out by the private sector. Further, there was poor access to health services, as well as different health systems, across the regions.

“It is a complex issue,” Osewe noted.

But top-level regional action gained momentum in the fight against TB in 2012 after 15 Southern African heads of State pledged to address the epidemic.

Health Ministers from South Africa, Mozambique, Lesotho and Swaziland, which collectively had over 500 000 mineworkers and between 1.5-million and 2-million former mineworkers, had also moved to develop a “harmonised” approach to treating TB  and signed, on Tuesday, a framework for harmonised management of TB in the mining sector, which was finalised in March.

The R330-million-a-year initiative, funded by all parties, could produce economic benefits of R13-billion and save over 3 000 lives over the next 15 years.

This followed the preliminary release of results from an ongoing World Bank study that showed a potential 40:1 benefit/cost ratio from testing and treating initiatives – two-thirds of which would likely be seen in South Africa.

The study evaluated labour, the costs of testing, the costs of and access to the required drugs for treatment, and hospital and bed occupancy fees against productivity gains, social support and savings from reduced treatments, besides others.

The study recommended a three-pronged approach, namely initiating testing and treating all gold and PGM miners over two years, establishing a tracking and referral system across the borders of South Africa, Mozambique, Lesotho and Swaziland, and improving the living and working conditions of all mineworkers.