Santos looks at CCS at Bayu-Undan 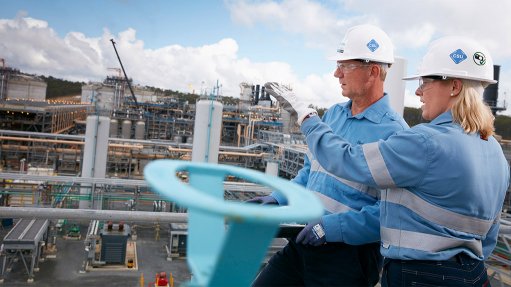 PERTH (miningweekly.com) – Oil and gas major Santos has signed a memorandum of understanding (MoU) with energy company Eni to cooperate on opportunities in northern Australia and Timor-Leste.

Santos on Monday told shareholders that the areas of cooperation include assessing the synergies of sharing possible infrastructures associated with gasfield developments around Barossa and Evans Shoal, pipeline to Darwin and onshore associated gas processing leading to liquefied natural gas (LNG) expansion developments.

This also includes investigating options to re-purpose the Bayu-Undan facilities to extend the life of the project, including a carbon capture and storage (CCS) project, subject to the agreement of the Timor-Leste government.

Santos MD and CEO Kevin Gallagher said the MoU built on the momentum for development of northern Australia following Santos’ final investment decision (FID) announcement for the Barossa gas and condensate project and life extension for Darwin LNG for the next 20 years.

“Eni are already a highly valued partner in the Bayu-Undan project and this MoU strengthens our collaboration and cooperation,” Gallagher said.

“CCS opportunities at Bayu-Undan are extremely exciting for Santos and Eni and today we are saying we would like to be open for business to take your carbon dioxide (CO2).

“In 2019 the London Convention was amended to allow CO2 to be transported across jurisdictions to enable the establishment of storage hubs. A CCS project at Bayu-Undan could provide a new job-creating and revenue-generating industry for Timor-Leste with quality carbon credits increasing in both demand and value internationally.

“Capturing and storing CO2 from industries in the Northern Territory will help it meet its net-zero emissions by 2050 target. That’s good for the environment, good for local jobs, good for local investment and good for regional development.”

Other areas of cooperation include the possible development of Petrel and Tern through Blacktip/Yelcherr gas plant facilities.

“As I said when I was in Darwin to announce our FID decision for Barossa, we have approval for two more trains at Darwin LNG and we are open to third party gas opportunities,” Gallagher said.

The non-binding agreement is a demonstration of intent by both parties to collaborate together and with other parties in the region to use existing infrastructure more efficiently, unlock the wealth of regional gas resources, and create new low-carbon business opportunities for both northern Australia and Timor-Leste.

Santos has previously flagged an FID on its Moomba CCS project, in the Cooper basin, for the second half of this year.

The proposed Moomba CCS project, in South Australia, would capture the 1.7-million tonnes of CO2 currently separated from natural gas each year at the Moomba gas plant and re-inject it into the same geological formations that have safely and permanently held oil and gas in place for tens of millions of years.