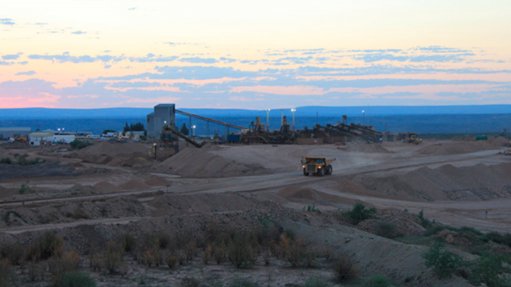 JOHANNESBURG (miningweekly.com) – While dual-listed Rockwell Diamonds is not yet in the “home stretch” of its quest to effect a turnaround, the company is gaining traction with the conclusion of the sale of its noncore Saxendrift alluvial diamond assets in the Middle Orange River region to private firm Nelesco 318 for R45-million.

In December, Rockwell announced the sale of certain assets, which included Nelesco’s assumption of R70-million in rehabilitation liabilities and the transfer of 100 employees, as part of repositioning efforts towards a “new Rockwell”.

“Not only have we reduced our liabilities and earned some much-needed cash, but we have recovered our operations and regained focus. We have a clear strategy, which is to get our Wouterspan mine up to full production and to see first production from our new Stofdraai mine by July,” said CEO Tjaart Willemse in an update to shareholders.

The group is also engaging an undisclosed interested party to conduct bulk sampling at the Daniels alluvials project with a view to developing the site as a joint venture.

Meanwhile, Nelesco completed site establishment at Saxendrift and has started mining operations, which were suspended in September 2016, after settling a R20-million payment – the first of three payments – following the completion of certain suspensive conditions.

“Until the Section 11 transfer is received, all operations will be on a contract mining basis with a royalty payable to [Rockwell] of 2.5% of revenue from diamonds recovered from properties covered by the transaction. Nelesco will be responsible for any related rehabilitation liabilities,” Willemse explained.

The expected C$1.25-million expected impairment of Rockwell's book value had been restated to C$8.55-million on completion of the transaction.

However, Rockwell remained “on the move” and was gaining traction towards realising the "new Rockwell" goals, he said.

“We still have to overcome some remaining challenges, mainly the pending liquidation application lodged by our erstwhile mining contractor and the fact that we are behind on revenue owing to inefficiencies in the half completed plant,” Willemse noted.

Completion of the final stage of the treatment plant in March is expected to result in improved processing efficiencies and the ability to generate revenue sustainably.