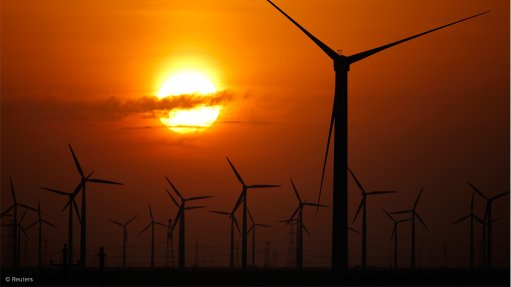 WASHINGTON – It is increasingly clear that mining and renewable energy are two businesses that belong together and, yet, figuring out the nuts and bolts of getting projects off the ground is not always easy.

For many renewable-energy companies, the slow pace of approving projects poses an ongoing challenge. “We have the skills the mining sector needs. The issue is getting momentum behind the mining sector to believe in these projects,” RES Canada microgrids manager Douglas McAlpine said.

Mark Bongiovanni, mining and metals sales manager for Schneider Electric, in Canada, pointed out that generalisations were difficult to make owing to each mining company and even each individual mining site, operating under its own unique set of considerations.

He noted that the diversity of the cost of energy in each country was what was driving development. In companies where it was difficult to get energy to the mine site, whether it was diesel, gas or the electrical grid, there was increased interest in looking at how to generate power locally.

“Ultimately, it’s a value proposition that each company – and, in some cases, each site – needs to evaluate for its own needs,” Bongiovanni said.

McAlpine emphasised the importance of continuing to clear up misconceptions around renewables.

One key message that still needed to be fully addressed was stability. “We need to overcome the perception that renewables are unreliable,” says McAlpine.

As renewables companies became better able to explain how intermittency could be managed, mining companies were growing more confident in the potential of wind and solar energy. “The most important message is that renewables can be a stable source of power,” he said.

Other important messages to convey were economic. McAlpine believed that renewables companies excelled at illustrating the benefits of solar plants or wind farms in terms of carbon savings and emissions reductions, but they needed to do an equally compelling job of explaining the dollars-and-cents equation for mining companies.

“Renewables are price competitive in a number of areas, particularly in the mining sector, in which you have isolated and remote mines,” he said.

A MEETING OF THE MINDS?

Oleg Popovsky, global business development director for SunEdison and board member at American Vanadium, noted that renewable energy went through an identity crisis in its very earliest days.

“Renewable energy is this big, interesting animal. Is it going to be part of the technology sector? Or the clean-tech sector? Or part of the traditional energy sector? What is it?” he asked. “Well, it’s all of the above.”

Renewable-energy providers were less fragmented now than they were in the recent past, and Popovsky believed that the industry had evolved in other ways, as well, so that renewable energy “looks more and more like the mining industry”.

He explained that renewables companies operated within three main business stages, each of which corresponded to a stage in the mining industry. He likened development in renewable energy to the exploration stage of mining, and this was followed by an implementation stage in both industries.

As renewable-energy concerns increasingly turned to independent power producers (IPPs) to sell energy into the marketplace, what they were doing corresponded to the final stage in mining in which ore or minerals were sold to different industry players.

Popovsky believed that these business-cycle parallels “should make the renewables industry more digestible, or understandable, for the mining sector.” At SunEdison, for instance, “we have created a financial product to make renewable-energy projects align with the problems that mining companies are looking to solve.”

Specifically, he said, SunEdison built solar power plants on mining sites and then sold all the renewable power to the mining companies just as they would have sold any other type of electricity.

Practically speaking, renewables companies were broadening the scope of their businesses to perform energy management functions – everything from energy storage to the control systems that regulated renewable energy and fossil fuel sources.

McAlpine emphasized that these new areas were applicable to mining. “We’ve been evolving into those areas because we thought they’d be globally significant, not just significant for the mining industry, and it just so happens that these are some of the key things in the mining sector, too.”

Mining companies were undergoing a transformation of their own. Schneider Electric’s Bongiovanni pointed out that ten years ago, the largest mining companies dominated the industry out of a prevailing belief that “bigger was better.” Today, he said, “better is better,” meaning that those mining companies able to innovate and produce at a lower cost were going to wind up being winners. Given this new dynamic, the mining industry was now far more ready to listen to how renewable-energy companies could help lower energy costs and solve other problems that mines might be facing.

Along similar lines, Till Krumbholz, sales manager for the energy sector’s smart generation solutions at Siemens AG, had found it helpful to delve into the financial situation of the mining industry, in order to provide solutions that were mutually beneficial. Specifically, he noted that mining companies were keen to reduce their project risk, and therefore were highly appreciative of the performance guarantee solution that Siemens offered.

Chris Matthews, new business manager at Mainstream Renewable Power, noted that the business model set forth by purveyors of renewable energy had changed because mining companies had baulked at investing in generation equipment.

The solution? Instead of selling mines a wind farm, companies like Mainstream realised that it was far more appealing to sell them a power purchase agreement, or PPA. “Nowadays,” explained Matthews, “developers are approaching mining companies and saying, ‘We’ll build it for you, and we’ll finance it. But you have to agree to buy the power.’” He continues: “That’s a much more appealing prospect for a mining company, particularly nowadays when mining companies want to keep things off the balance sheet.”

Matthews also saw renewable providers changing to adapt to a behavioural issue characteristic of many mining companies. Because most mining companies made decisions slowly, Mainstream had found that for renewables projects, especially hybrid projects in Africa, it often made sense to wait for the mines to come to the renewables company, rather than the other way around.

David Willick, commercial director in North America for GE Mining, was seeing “a risk-sharing appetite” from mines uneasy with the idea of assuming the full capital expenditure burden of installing and commissioning a renewable-energy solution. “They’re looking for a third party to put up a power generation system – so they can essentially buy power by the hour.”

This desire for partnerships came out of the fact that mines were, by definition, temporary ventures that would eventually be depleted. Given this central fact, it was no wonder that mines were concerned about investing in renewable energy when they might not be working at a given site long enough to reap the full return on investment. Willick, therefore, saw potential in partnering with local communities: “If we start working together and there’s some type of cost- and risk-sharing, the neighbouring communities can benefit longer term. And that could make it more attractive for the projects to proceed in the shorter term.”

WHAT THE FUTURE WILL BRING

Many experts were convinced that energy storage was a critical component for improving renewables penetration at a mine site. Willick noted that GE had an energy storage solution that allowed mines to put power into a storage facility when the wind was blowing or the sun was shining, but the mine was consuming less energy than the power system was generating – and then drew from that power later, when energy was needed again.

He also pointed out that technological innovations would help make the renewables equation even more attractive for mines. “Mines operate in challenging geographical locations with significant obstacles to overcome, whether it’s extremely high rock-face temperatures or extremely cold ambient temperatures,” Willick said. He pointed out that technology advances would prevail to increase the renewables penetration rate and drive down costs for mines.

McAlpine, for instance, was sanguine about the prospects of larger-scale projects being commissioned in the next two to three years. “Mines looking at these types of projects want to install larger projects. The desire is there,” he said.

He, therefore, believed that 10 MW projects would start to be built soon instead of the one- or two-megawatt pilots generally seen today, although he expected the initial rate of uptake for these sizable projects would be moderate.

“One of the big problems has been how the mines perceive renewable energy,” McAlpine concluded. “Once they can visit and take a look at these plants operationally, they’ll be a lot more confident proposing them for their mine sites. They’ll start to understand the risks and won’t be so concerned.”

Meet the mines seeking renewable partnerships and the energy providers providing solutions at the Renewables and Mining Summit and Exhibition, October 15 to 16, Toronto.