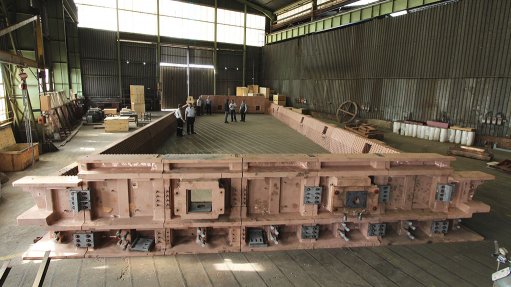 South Africa-based foundry and engineering company Thos Begbie has successfully manufactured and supplied recycled copper cast components to a platinum group metals (PGMs) smelter near Rustenburg, in the North West, over the past three months.

About 115 000 kg of raw copper and 6 500 kg of graphite were used for the project. The contract for the manufacture and supply of the components was about R50-million.

“If we look at a component for component comparison, factoring in the use of some virgin material, we successfully achieved a 90% saving on material for every component,” says Thos Begbie sales engineer Esli Bantjes.

He enthuses that, by adding the recycled copper to the virgin copper supplied by the smelter, the company has supplied 700 000 kg of copper-cooling components to the South African smelting sector since October last year.

Thos Begbie has been supplying pyrometallurgical copper components to its Rustenburg client for more than 30 years, and the client has always been very happy with the partnership, says Bantjes.

“The rebuild at the Rustenburg smelter is continuous and the startup phase, whereby the client makes sure the refractory has cured, has started; however, production is still pending.”

Bantjes adds that the company explored the option of copper recycling because of the effect of Covid-19 on raw material imports and exports, particularly in terms of severe shortages in raw materials such as copper.

“This highlighted that we needed to have a backup plan to ensure that we’d have copper available for any new rebuilds and projects.”

Bantjes points out that copper is an excellent conductor of not only electricity but also heat.

“In the PGM smelter’s arc furnace, the electrical charge must be transferred through an electrode into the furnace to create an arc between the different phases.”

Producing recycled copper from platinum smelters is a challenge, as some of the components in the smelter’s arc furnaces had been subjected to significant erosion and corrosion, as well as monel pipes also embedded in the copper casting of the furnace.

“The monel tubing safely conveys water throughout the casting, hence it being called a cast copper cooler. For a copper cooler to perform its function, it must comply with certain criteria, of which thermal transmittance or the ability to transfer heat without affecting the energy input into the furnace, is one of the most important [factors].”

Melting the copper with the monel still embedded would lower the conductivity and, consequently, influence the thermal transmittance of the recycled material.

“We had developed a process that enables us to successfully separate the copper and contaminants – in this case the monel – thereby providing us with ‘clean’ copper.”

This process allowed for the recovery of 99% of the scrap copper components from the different platinum smelter sites and the rebate of the copper against the cost for a new component.

“We have manufactured and tested a top-secret component for one of South Africa’s platinum smelters. It was designed by one of the biggest furnace design houses in South Africa,” enthuses Bantjes.

“All the tests were to the satisfaction of the end-user. “We have been invited to tender for the manufacture and supply of the entire furnace.”

Another platinum smelter will order a furnace, as it will conduct a rebuild later this year and, as a rule, the smelter keeps an entire furnace’s components in stock.

“These two projects are worth about R100-million.”

Although the company is repurposing copper from only local PGM smelters, it is promoting its being able to rebate some of the scrap copper components from its other clients to reduce material costs, Bantjes concludes.