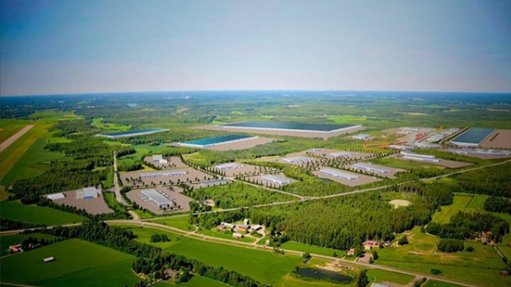 JOHANNESBURG (miningweekly.com) – Five companies that can supply essential raw materials for an emerging battery industry in Finland have joined a cooperation network that aims to obtain international investment in the battery cluster.

The cooperation network includes the cities of Vaasa and Kokkola, Freeport Cobalt, the world's largest cobalt refinery and producer of battery chemicals, Norilsk Nickel, the producer of nickel metals and nickel chemicals in Harjavalta, Terrafame Group, the parent company of Terrafame producing nickel, zinc, cobalt and copper in Sotkamo, Keliber, which is preparing to start lithium production in Kaustinen and Kokkola, as well as Beowulf Mining, the owner of a graphite deposit in Heinävesi.

Kokkola Industrial Park, in Kokkola, is home to Freeport Cobalt’s cobalt refinery and Keliber’s lithium refining chemical plant will also be located there.

The network was established as an initiative of Vaasa, which has set aside a large area of “several hundred hectares” for battery factories.

"During the year, several new battery factory projects have been launched in the world. We are having discussions with American, Asian and European battery manufacturers. Demand for batteries will continue to grow, especially around applications like local energy storage solutions and traffic. Finland now has a unique opportunity to be involved in the growth and active development of this new field of industry," Vaasa Mayor Tomas Häyry said in a news release this week.

Norilsk Nickel Harjavalta is a global producer of nickel metals and nickel chemicals. In 2017, it produced almost 60 000 t of nickel, which, for example, is used in electric vehicle batteries.

Terrafame Oy produced about 21 000 t of nickel and about 47 000 t of zinc in 2017. Terrafame is preparing an investment decision on refining its nickel-cobalt product further to battery chemicals. The objective is that the new plant will start operating in 2020. The parent company, Terrafame Group Oy, is one of the few Finnish companies involved in the European Union (EU) Battery Alliance network, which is preparing a new battery cluster funding programme on the mandate of the EU Commission.

"Global electric vehicle and plug-in hybrid penetration would need to reach 12% in order to comply with international climate targets by 2025. This would mean that the proportion of electric vehicles and plug-in hybrids would be ten times higher than currently. At the same time, the demand for raw materials for electric cars is expected to grow strongly. The development offers very interesting outlooks for individual companies, as well as for the Finnish battery and mining cluster as a whole”, Terrafame Group CEO Matti Hietanen said.

Commenting on its involvement in the project, Aim-listed Beowulf CEO Kurt Budge said that the buzz was growing in Finland regarding battery minerals and metals, which was materialising into new networks, partnership, projects and funding opportunities.

Fennoscandian is also part of a consortium research project titled ‘Green Minerals – Graphite and Lithium, Exploration to Products’, in which Keliber and the Geological Survey of Finland are the other participants.