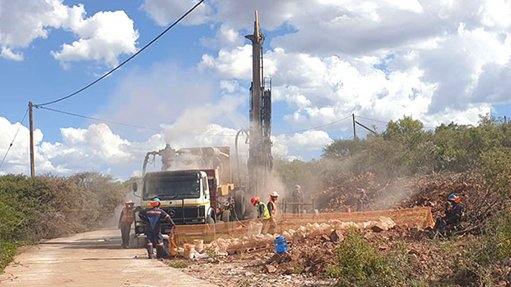 DIGGING FOR RESULTS The feasibility studies and demonstration plant at the K.Hill project owned by Giyani Metals in Botswana is making progress

Manganese development company Giyani Metals announced progress on its demonstration (demo) plant and feasibility study (FS) for its Botswana-based manganese oxide project, the K.Hill project, and on exploration and corporate activities, in March.

At the time, Giyani said that the design of the process flowsheet was under final review, and that the company had placed an order for one crystalliser unit of the demo plant.

It noted that the crystalliser unit is the largest and longest lead item of the demo plant and that delivery was scheduled for the fourth quarter of 2022.

Construction and commissioning of the demo plant will be undertaken in South Africa before it is transported to the K.Hill project site, in Botswana.

First shipment of product samples to potential customers was anticipated for 2023.

The first of three key development objectives for the demo plant is that it demonstrate that the high-purity manganese sulphate monohydrate (HPMSM) product specifications can be achieved based on the process flowsheet developed for the K.Hill project.

The third and final objective is to derisk the commercial plant development by using the demo plant for optimisation of the ongoing process engineering work and as a training facility.

By focusing on the achievement of the highest possible HPMSM product specifications, Giyani can establish itself as a premium supplier to the growing battery market.

Once commissioned, the demo plant will be capable of producing about 600 kg/d of HPMSM crystals for delivery to potential customers for product testing.

The company noted that it had confidence in the metallurgical testwork completed to that point as well as at that stage of development for the process flowsheet. This confidence enabled its engineering consultants to move towards completing and publishing the FS.

It stated that the confirmation of the plant design would allow it to settle project parameters, including those of operating and capital expenditure, with the company optimistic that the FS could be released in the third quarter of 2022.

As at March 30, 18 reverse circulation (RC) drill holes had been completed as part of the infill drilling programme at the K.Hill extension for a total of 1 690 m.

The total programme is expected to be about 55 RC drill holes and ten diamond drill core holes for a total of about 7 150 m of drilling.

The objective of the programme is to determine the correlation between the southern mineralised horizons and the northern resource horizons and to convert the majority of inferred resources in the K.Hill extension to indicated resources.

The indicated resources could be incorporated into an optimised mine development plan for the K.Hill project.

“Thanks to the tireless efforts of our technical team and project consultants, our work on the process flowsheet is nearly complete so that we can move ahead at pace with both the demo plant and the FS,” said Giyani CEO Robin Birchall.

“With the plant design at finalisation, we are able to complete the last outstanding technical and economic components of the FS.”

He commented that it had been a meticulous and strenuous process, which demonstrated the high barriers to entry that existed to producing a high-purity battery-grade chemical from manganese ore, “but we are fully focused on completion and release of the study as soon as possible”.

In parallel, Giyani’s work on the ground is aiming to grow the project through further delineation of both K.Hill extension and the Otse prospect.

As the company was already planning the construction phase for the K.Hill project, it had appointed Dirk Geerligs as project development and construction VP.

Geerligs is a civil engineer and has over 20 years’ experience in construction and project delivery of mining and industrial projects globally.

He had been a consultant to Giyani since May 2021 and joined the company on a full-time basis on April 4, 2022.

Giyani noted that, as the company has expanded its footprint in Botswana, it has taken the opportunity to appoint a full-time country manager to direct its activities and expand the employee base in the country.

For example, Botswana national and a geology graduate from University of Leicester, in the UK, Elisa Davis, who has mining and operational experience both nationally and internationally, joined the company on a full-time basis on April 19, 2022.

Birchall concluded that, as the company moves towards breaking ground on the K.Hill project, it is delighted to bring Geerligs and Davis into the Giyani management team.