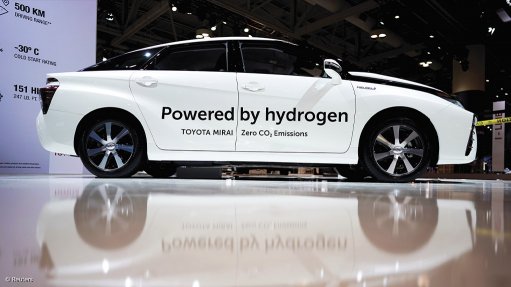 JOHANNESBURG (miningweekly.com) – The need for pressure to be applied to the platinum mining industry to go “green” was expressed at Nedbank CIB Mark Research's recent conference on fuel cells in Cape Town.

While platinum group metals (PGMs) have been used for decades to stop air pollution in the major cities of the world, steps are only now starting to be taken to halt carbon emissions at PGM mining operations – and then only by some companies.

Ivanplats senior VP Gerick Mouton expressed the view that if pressure to protect the environment did not come about as a consequence of government policy, he believed that the major buyers of PGMs, for example, the BASFs and the Johnson Mattheys of the world, would want to ensure that they were buying a green metal for on sale to their catalytic converter clients.

If they pushed hard to ensure that the PGM ounces they bought were green, it would, in turn, pressurise PGM mining companies, as the suppliers of these reputably clean metals to operate as cleanly as possible at mine level.

“Things don’t happen if there’s no pressure. Pressure has to be applied for things to change and I think that’s what the industry needs,” Mouton told the conference, attended by Mining Weekly Online.

Earlier, Royal Bafokeng Platinum CFO Hanré Rossouw had told the conference that consumer awareness of the need to protect the environment was becoming more and more acute.

Rossouw said it was the responsibility of the South African PGM mining industry to be able to say that “this is good green platinum”.

“Eighty per cent of the world’s platinum still comes from Southern Africa so it is the source, ultimately, of the platinum bought in London, but if the consumer, whether it be in Japan, Europe or the US, can’t be sure that this came from a sustainable source, they're not going to buy it, and the supply chain is going to suffer,” Rossouw warned.

“It’s important for us to do the right thing and also to better communicate it. Unfortunately, it’s been a tough ten years for the mining industry in South Africa, especially, so we’ve got to do our part in a small way to make a difference and to get our green credentials back,” he added.

This could be done, Mining Weekly Online suggests, by, wherever possible, making use of electrolysers and hydrogen fuel cells, which both use PGMs, to produce clean electricity from clean hydrogen.

The electrochemical reaction in the fuel cell generates only water as a by-product and produces zero greenhouse gas emissions at the point of use.

It is the proton exchange membrane fuel cell that is the consensus choice for mobility, owing to low operating temperatures, low weight and 75% efficiency.

Anglo American Platinum (Amplats) announced at last month’s presentation of financial results that it was screening the opportunities to use fuel cell trucks in its fleet.

“We think that by this time next year, we’ll have the largest fuel cell truck operating anywhere in the world,” Amplats CEO Chris Griffith said at the results presentation.

Better late than never, but still it is late.

Mining Weekly Online can legitimately say that because it was present in Durban, in December 2011, when the then Anglo American CEO, Cynthia Carroll, proclaimed platinum-catalysed hydrogen fuel cells as "efficient, versatile and scaleable and representing a proven technology that ensures clean, reliable and cost-effective power".

She was speaking at the United Nations climate change convention’s seventeenth Conference of the Parties (COP 17), where delegates were able to inspect Anglo American Platinum's (Amplats')150 kW hydrogen fuel cell, which was generating zero-emission electricity.

Even at that stage, fuel-cell technology was proven and Carroll drew on an abundance of old and new research to champion the fuel cell’s cause in the presence of the World Business Council on Sustainable Development, the International Chamber of Commerce and South African top brass.

She described the window of opportunity as being “wide open” for South Africa to create “hundreds of thousands of new jobs and simultaneously obtain a source of clean zero-emission electricity”.

It was a huge opportunity then and it has become a no-brainer now. This is because rampant hydrogen energy adoption is driving the process and China has created a storm by changing its thirteenth five-year plan from battery electric vehicles to platinum-catalysed fuel cell electric vehicles.

“With platinum at its heart, a fuel cell industry would support South Africa’s drive for jobs,” Carroll said eight years ago. She was able to do so with great confidence after putting a think-tank to work  – the UK’s Carbon Trust – which found correctly that hydrogen fuel cells had the potential to drive the development of a new industrial sector in South Africa and provide the country with the opportunity to become a major player in the global green economy.

The UK Carbon Trust had found that, with the appropriate levels of deployment of investment in manufacturing, insulation and maintenance activities, “hundreds of thousands of new jobs could be created". What is more, it found that the fuel cells produced could simultaneously help to meet South Africa’s energy security challenges and provide off-grid rural communities with energy, without any major expansion to the national electricity grid.

South Africa has the superior sun power and the prime wind to use the PGMs it mines at a time when the hydrogen they twin with has left slow adoption and technical frustration. behind

Are South Africans going to sit back and allow the rest of the world to seize this moment – again? Surely not.