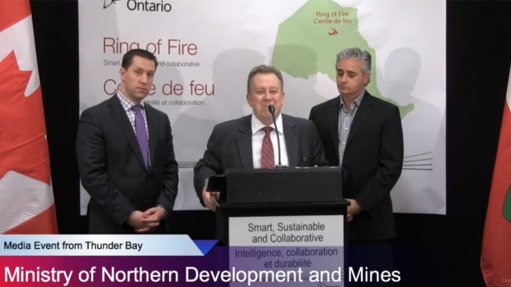 TORONTO (miningweekly.com) – The provincial government of Ontario on Monday announced a massive $1-billion set aside in its new budget, which would be announced on Thursday, to develop strategic all-season industrial and community transportation infrastructure in the Ring of Fire (RoF), in Northern Ontario.

In making the webcast announcement in Thunder Bay, provincial Minister of Northern Development and Mines Michael Gravelle beseeched the federal government to match its contribution and throw its weight behind the development of what had been billed as a "project of national significance".

“Our government is committed to making a significant investment to fund transportation infrastructure development in the RoF. We have made important progress over the past few months to bring partners and divergent interests together. Now we need the federal government to match this commitment so that we can move forward on realising the RoF’s potential and making important advancements on regional, environmental and economic developments,” Gravelle said.

The Ontario provincial government and local First Nations last week Thursday celebrated the recent signing of a regional framework agreement to develop the RoF, a mineral-rich area in the northern muskeg-wastelands of Ontario.

The agreement was hailed as a first step in the historic, community-based negotiation process that would aim to bring together the nine First Nations and Ontario to discuss and negotiate an approach for development in the First Nations' traditional territories. The process would help ensure that First Nations participate in, and benefit from, RoF developments.

Ontario is currently facilitating the creation of a development corporation to accelerate strategic infrastructure development in the region.

The corporation would bring together key mining companies, First Nations, and the provincial and federal governments to develop, construct, finance, operate and maintain infrastructure supporting access to strategic resources in the area. Gravelle labelled the RoF as a multigenerational economic opportunity for the province and country, with known mineral potential worth around $60-billion, which represented one of the largest deposits of chromite ever discovered in North America. The region also holds the potential for significant production of nickel, copper, gold and platinum.

The RoF is expected to create thousands of jobs and enhance the economic prosperity of Ontario and Canada.

“As a Northerner, I’m excited by the opportunity that the RoF brings to our communities and our province. We know the region is rich with mineral deposits and represents a multi-generational economic development opportunity.

“Our government is committed to this development and we need the federal government to match our investment so that we can open up access to the RoF in a smart, sustainable and collaborative way to create jobs and ensure that Northern Ontario prospers,” Ontario Natural Resources Minister David Orazietti said.

He said that the province is hoping that the federal government would support development of the RoF, similar to how it had boosted infrastructure development projects in northern British Columbia, the oil sands in Alberta and natural gas projects on the Eastern seaboard.

How the money would be spent is unclear at this point, with the private sector backing opposing modes of transport to reach the undeveloped mine camp, and transport the minerals to market.

KWG Resources, through a subsidiary, Canada Chrome Corporation, controls the key transportation route to the RoF on land, which it acquired through claim staking in 2009.

KWG has proposed a rail route connecting to the CN transcontinental rail line at the Exton rail siding to transport ore to consumers, competing with its US-based joint venture partner Cliffs Natural Resources, which has proposed an all-weather road south connecting to the same rail line west of Exton. Cliffs’ plan is to transport chromite concentrate by rail to Capreol, in the Sudbury area, where it plans to build a ferrochrome production facility.

TSX-V-listed Noront Resources hailed the province's financial commitment, saying it would provide the necessary funding for building a shared road and power corridor to the benefit of local First Nations and the firm's Eagle's Nest mine, which it said would be the first mine to be developed in the RoF.

"Mining and the associated job creation can't happen without infrastructure, so we are pleased to see the province make a clear public commitment to funding a transportation corridor in the RoF. All-season road access, stable affordable power and the opportunity to participate in the economic development of the region will benefit local communities, resource companies and government," Noront president and CEO Alan Coutts said in a statement.