One of world’s largest peristaltic pumps at Electra 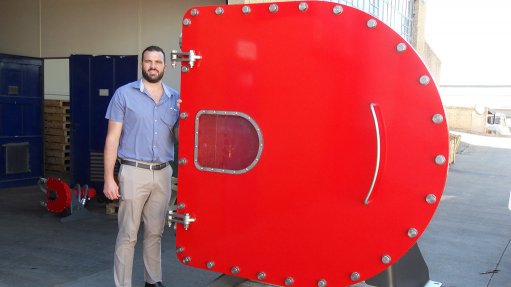 Since pumps and agitators manufacturer Afromix introduced its AFX peristaltic hose pumps range at Electra Mining Africa 2014, yearly growth in demand for its pumps has increased by between 20% and 30%, Afromix MD Eugene Els tells Mining Weekly.

At this year’s Electra Mining Africa, Afromix will showcase one of the largest peristaltic hose pumps available in the world, the AFX150, when it exhibits at the Nasrec Expo Centre, in Johannesburg, from September 12 to 16.

“Setting out, we focused on reselling pumps and maintenance parts, but we soon identified a gap in the market for a better product and it became clear that the AFX pump series would be great success,” says Els.

He notes that the AFX series has had great success at mines in South Africa, the Democratic Republic of Congo, Swaziland, Zimbabwe, Zambia, Namibia and Botswana, as well as in Canada, the US, Mexico, the Philippines, Spain and Finland.

The company added the AFX150 earlier this year, completing a pump series that now includes 11 size variations. The 150 mm pump weighs up to 2 560 kg, depending on the type of gearbox and motor with which it is fitted.

The AFX is a robust pump that was designed specifically for mining applications, including filter-press feed, thickener underflow, corrosive and abrasive slurry transfer, chemical and acid dosing, and water treatment.

“The pump has basically proved effective in [pumping]anything you would usually battle to pump,” Afromix application engineer Ernest Wermuth says, noting that the pumps can run dry indefinitely without damage.

In addition, the AFX pumps are fully reversible and, thus, able to pump in either direction, require no check valves or seal water flush systems and feature a suction lift capacity of up to 9.5 m.

Afromix has also invested considerably in research and development to improve the longevity of the pump and streamline the manufacturing process for mass production of units. The pump also requires minimal maintenance, with the hose being the only wearing part, Wermuth states.

The hose has also been a key focus of the company and Wermuth points out that the roller design is available in various materials. This eliminates wear and friction on the roller. “The hose is the heart of the pump and, through our facility in the UK, we have developed a design that has produced very good results from on-site tests. These modifications improve the wear life of the hose and reduce power consumption of the unit by between 25% and 50%, compared with competitor pumps.”

He highlights that the company has received overwhelmingly positive feedback from clients who have installed AFX pumps. “The series is the latest generation of pumps and we have made so many improvements to it. The pump can also . . . enable a huge cost saving – in terms of not only capital costs but also . . . operational costs.”

With the success of the pumps range, Afromix is expanding its business into new markets, such as North America, and also opened a new hub in Poole, in the UK, earlier this year. In October, the Johannesburg-based head office moved to new premises that are about three times larger than the previous site. The move has enabled this office to significantly increase the amount of stock it holds, readily available for local customers.

“We aim to build good relationships with our customers by offering a hands-on, personalised service and ensuring that everything is readily available to meet their needs,” concludes Els.