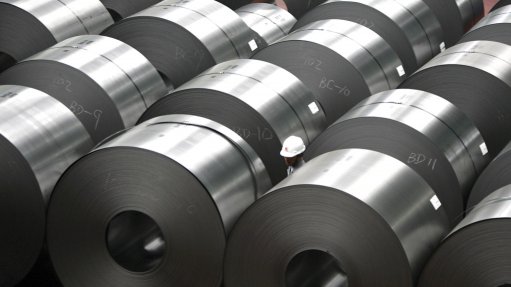 STEELY RESOLVE About 70% of the primary nickel produced in 2018 was used for stainless steel production
Photo by: Bloomberg

The growth of the nickel pig iron (NPI) market in Indonesia has led to the rapid increase of nickel mining operations in the country, says international metals and minerals consultancy Roskill senior analyst Olivier Masson.

Nickel pig iron, a low-grade ferronickel, was created in China as a cheaper alternative to high-grade nickel that is used for stainless steel production.

Indonesia has encouraged investment in NPI plants in the country in the past three to five years, after changes in policy by the Indonesian government in the past six years, says Masson.

“Five to six years ago, Indonesia mostly mined laterite ores for export to China, where it was processed into NPI. There was only limited domestic ferronickel and nickel intermediates production. In 2014, Indonesia banned the exports of unprocessed ores to stimulate greater local downstream processing of those ores. They’ve been successful, as many Chinese companies have decided to invest in NPI plants in Indonesia.”

In early 2017, the Indonesian government revised its policy to allow for the limited export of unprocessed ores up to 1.7%. This has allowed for some ore exports to China, but Indonesia now has its own enhanced NPI capacity.

With projects for further capacity to be built and commissioned this year, Masson states that Indonesia has become a major nickel mining country.

While Indonesia is a growing prospect in terms of nickel mining, Masson highlights the Philippines as another major nickel mining country, despite ongoing legislation issues.

Lopez initiated an audit of the mining industry in the country and recommended the suspension or closure of several mines in the Philippines, many of which were nickel mines. This also increased the price of nickel dramatically at the time.

Since then, Lopez has been replaced by Roy Cimatu. While this provided relief for the mining sector, many mining operations are still not allowed to operate.

“Miners have been allowed to ship their ore stockpiles, so in terms of actual supply to market, they’ve been keeping up production. The upshot, however, is that there hasn’t really been a lot of new growth in mining production from the Philippines,” Masson states.

He highlights that should these problems be dealt with, the Philippines will remain a major nickel mining country, despite a lack of refined, primary nickel production such as that of Indonesia.

“That’s a share that’s been rising because China tends to produce stainless steel using NPI, and although it’s a lower-grade nickel, it’s still a primary-produced nickel.

“China produces more than half of the world’s stainless steel production, mostly using primary nickel, which explains why the share has increased.”

The stainless steel market will continue to be a major market for primary nickel in the decades ahead, he adds.

Masson believes that it will be fed mainly through production increases in NPI, with more production in China and Indonesia.

“We do expect a modest increase in scrap usage by mills in China as more scrap becomes available. If you look back 20 years, China was building and, at some point, they will start demolishing and rebuilding, and stainless steel-containing products will reach end-of-life, making more scrap available.”

Masson notes that Roskill expects prices to increase in 2019 and 2020, as it expects the market to remain in a deficit for this period.

“I think for the outlook in the next couple of years, the nickel price should see some support from the expected market deficits,” he concludes.