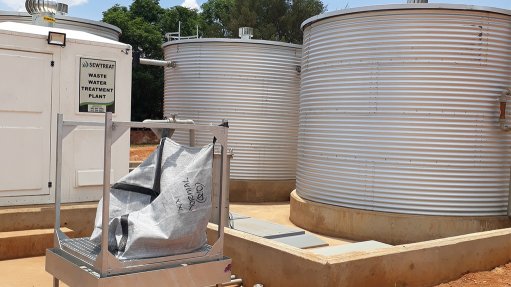 Following the successful commissioning of a sewage treatment plant for coal mining company Canyon Coal’s Khanye colliery, in Gauteng, in early 2019, plans are under way to build similar plants at the company’s planned De Wittekrans and Palmietkuilen collieries.

In a statement issued by the company last month, Canyon Coal executive chairperson Vuslat Bayoglu said that R1.6-billion would be invested in De Wittekrans, near Hendrina, Mpumalanga, which will be an opencast and underground mine with an estimated life-of-mine (LoM) of about 24 years, based on run-of-mine production of about 200 000 t a month. It is expected to create about 430 jobs.

With Covid-19 delaying the project, Bayoglu said that development work would start as soon as reasonably possible.

“Although our timetables have been delayed, they have been by no means derailed,” he said.

He added that the Palmietkuilen colliery project, in Springs, Gauteng, was also due to start development this year. The expected cost of development is about R1.5-billion and the mine should create about 800 jobs.

Palmietkuilen will be an opencast mine producing 600 000 t of coal a month at steady-state production, resulting in an expected LoM of about 22 years.

Planning for the sewage treatment plant at Khanye colliery began in December 2017, with construction starting in May 2018. The plant was completed in December 2018 and commissioned shortly thereafter.

The sewage treatment plant treats sewage water from the entire mine and discharges treated water into an adjacent wetland system.

“We test the quality of the water on an ongoing basis and the results continuously exceed the acceptable discharge standards. This contributes to the overall health of the wetland system by improving the water quality and maintaining a constant flow of water,” said Canyon Coal group project manager Clifford Hallatt in a newsletter issued last month.

In addition, Hallatt tells Mining Weekly that the rationale behind the building of the plant was the significant cost savings in terms of operation and maintenance, compared with the costs that would have been incurred using a conventional conservancy tank system.

The plant at Khanye colliery, which is designed to process 30 000 ℓ/d, was valued at about R1-million in May 2018 – a figure that includes 12 months of operation and maintenance, as well as monthly effluent quality tests.

“At Canyon Coal we are very cognisant that water is an important resource that must be used sensibly and responsibly at all times,” Hallatt said.

All of Canyon Coal’s mines use closed water reticulation systems, which ensure that no contaminated water is released from the sites. The water is channelled and collected in pollution control dams. This water is used for dust suppression within the mines’ boundaries and also pumped from the dams back to the on-site processing plants for reuse.