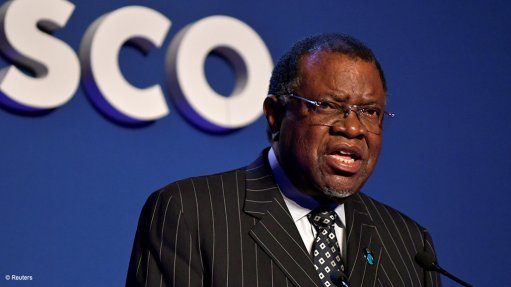 The Namibian government may release a second request for proposal (RFP) early next year for the development of another large-scale green-hydrogen complex, having announced a preferred bidder for the first such project in early November.

Presidential Economic Adviser James Mnyupe told delegates to the virtual Africa Green Hydrogen Forum on November 23 that Namibia may make an announcement on the new RFP at the World Economic Forum, scheduled to take place in Davos, Switzerland, from January 17 to 21.

Namibia used the side-lines of the COP26 climate gathering to announce that it had selected a preferred bidder for a $9.4-billion green hydrogen project to be developed in the Tsau//Khaeb National Park, near the coastal town of Luderitz, in southern Namibia.

The plan seeks to develop “new and diversified frontiers of growth” including in the green economy and by September nine commercial green-hydrogen proposals had been received from six developers in response to an RFP issued by Namibia in June.

Namibia made 5 700 km2 of land available for the concession and sought bidders that could best meet its economic and social criteria through building the assets needed to produce green hydrogen, green ammonia and synthetic fuels in the concession area.

In early November, Namibia announced that HYPHEN had been selected as the preferred bidder to build a vertically integrated project able to produce 300 000 t/y of green hydrogen and green ammonia for export into regional and global markets from 2026 onwards.

Mnyupe said the Namibian government intended holding 24% of the equity in the facility, but that it was still assessing its funding options, including the raising of possible concessional finance and green bonds.

It was also possible that the stake would be divided between some of the countries State-owned enterprises, while work was also under way to establish a sovereign wealth fund, which would invest proceeds from the project.

The Namibian government saw the initial hydrogen project as a potential “spark” for the broader industrialisation of Luderitz, where green zinc, green fertiliser and green rail opportunities could also be pursued, along with the sale of renewable electricity into the Southern African Power Pool.

Mnyupe indicated that similar initiatives could be rolled out to other parts of Namibia, including in the Erongo and Kunene regions.

In a separate presentation HYPHEN’s Dr Tobias Bischof-Niemz reported that detailed feasibility and environmental studies had already been conducted, with particular emphasis on limiting the environmental impact in the sensitive area, with certain no-go zones having been identified.

The wind turbines to be introduced as part of a renewable-energy mix that would combine both wind and solar photovoltaic generators would also require purpose-built blades to accommodate the intense winds that prevailed in the area. Discussions had been initiated with original equipment manufacturers to assess prospects for the domestic manufacture of these blades.

Once both phases were complete, the project would involve 5 GW of renewable electricity and 3 GW of electrolysis, which would split desalinated water into hydrogen and oxygen.

The desalination plants would be over-sized so as to supply potable water to Luderitz, which has a current daily water demand of 3 000m3.

HYPHEN, which is a JV between ENERTRAG South Africa and Nicholas Holdings Limited, is also proposing the development of a new port, to cater for exports to Europe, starting with the export of green ammonia.

Given Namibia’s world-leading combination of wind, sun and land, Bischof-Niemz believes there is realistic potential for the country to secure 5% of global demand for green hydrogen derivatives such as green fertiliser, shipping fuel, steel and sustainable aviation fuel, some of which could be produced in partnership with enterprises in neighbouring South Africa.

That being the case, the country, which has a current yearly gross domestic product of $10-billion, could develop a hydrogen-based export industry worth $35-billion a year, while creating more than 200 000 jobs.

“Green hydrogen is, thus, a once-in-a-lifetime opportunity for Namibia.”