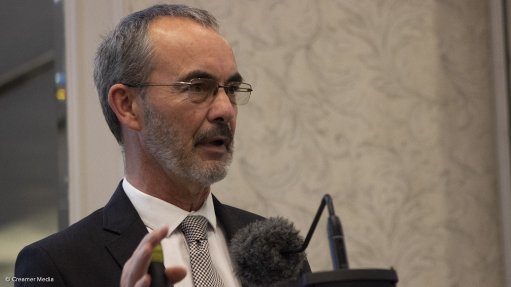 There have been positive developments since the introduction of the Economic Reconstruction and Recovery Plan in October last year, and while implementation has been delayed, continued engagement between Minerals Council South Africa and government, as well as the current commodities price environment, has resulted in cautious optimism for the mining industry, says Minerals Council chief economist Henk Langenhoven.

“Mining is doing well at the moment,” he comments. “There’s a very good feeling that’s developed between the companies and their employees, because of how the companies kept paying salaries and tried to keep miners safe during the height of the pandemic.”

In addition, the “mercurial rise” in commodity prices last year (30% in rand terms) has had a “major impact” on the recovery of mining turnover. This is despite mining production declining by 12% year-on-year in 2020.

Langenhoven notes that, because of the turnover increase, many companies were able to pay dividends for the first time in six years. Moreover, the mines’ tax and royalty contributions helped keep the local economy afloat. “In many ways, we contributed to sustaining lives and livelihoods outside the industry.”

The impact of the price environment is further emphasised by the fact that, while mining production for the second quarter recovered to only about 2.6% higher year-on-year, unlike other economic sectors, the mining industry did not shed jobs. In fact, it has added about 5 000 jobs this year.

“The combination of better commodity prices and the lower-than-expected contraction of global demand during the Covid-19 crisis resulted in the value of exports growing at a surprising rate, ending at an estimated 24% higher in 2020 than in 2019. This compensated for lower production and exports. Export sales by value have continued to grow during 2021, increasing by 54% year-on-year in May.”

He notes that, at present, it is the logistical problems surrounding rail, harbour and roads that are hindering the industry’s ability to recover to prelockdown productivity levels.

The effects of the Covid-19 pandemic, much like the virus itself, exacerbated existing issues, including the economic malaise South Africa was experiencing before the outbreak. Further, while the Recovery Plan remains key to stabilising the economy, the Mineral Council believes that deeper and urgent infrastructural reform, particularly in terms of establishing frameworks that enable increased private-sector participation, would go a long way towards addressing the country’s lack of competitiveness and investment and add vitally important job opportunities.

“Government does not have the finances or the project implementation capacity to address existing infrastructural challenges.”

As such, the Minerals Council strongly advocates that the private sector be able to participate in public–private construction partnerships or be allowed to operate infrastructure such as railway lines or ports.

Langenhoven cites the Richards Bay Coal Terminal (RBCT) and the Durban port. While he notes that it is not a perfect one-to-one comparison, because the latter is a container terminal, he points out that the State- operated terminal is ranked as one of the worst in the world. On the other hand, the RBCT, which is a privately run coal terminal and is one of the world’s largest, is efficient and cost effective.

The Minerals Council’s plea is for government to leverage the private sector’s appetite to invest in “network industries” to create efficient, sustainably reliable and competitive transport and energy systems, which will ultimately benefit both the State and the private sector.

“Take the Transnet coal line, for example. We know there are bottlenecks at the Overvaal tunnel. We also know that the export price for coal is nearly double what it was last year, but we can’t get all the product we’d like to the terminal. Eskom is using less and less coal, but we can’t take advantage of the current export potential, because of logistical constraints.”

This is further emphasised by the Minerals Council’s statement in August, which noted that the average monthly export performance of the mining sector in the first six months of 2021 had not returned to pre-Covid levels. As of August 25, total export sales for 2021 amounted to R1-billion and were 2.7 million tonnes lower than in the first half of 2019.

Moreover, the Minerals Council noted that Transnet Freight Rail had experienced high levels of theft and vandalism on its network, as well as other operational challenges. Consequently, a senior Minerals Council delegation, led by its president, Nolitha Fakude, met with the Transnet leadership team in August to discuss how to cooperate to resolve constraints and improve performance.

Langenhoven says that another area where greater collaboration is crucial is in water provision. “Water, in some areas, is becoming a major problem. The Sedibeng Water Board, for example, has failed to upgrade and maintain the pipeline to Hotazel, in the Northern Cape. The mines in the area can and have pooled their resources to provide excess water to one another, but that doesn’t solve the problem.

“From a sustainability perspective, if the mines are not certain about water provision in the long term, they will mine what they can and leave. They will not look to expand or explore, because they cannot be sure that they will have an adequate water supply. More importantly, the communities need water. It is a water-scarce region.”

He comments that a team from the Minerals Council is engaging with the Sedibeng Water Board and the Department of Water and Sanitation regarding the Vaal Gamagara Water Supply Scheme upgrade, and that there has been some improvement in water provision of late.

Meanwhile, the Recovery Plan identifies the platinum-group metals sector as a key focus area. It suggests that the Hydrogen South Africa (HySA) programme – launched in 2007 by the Department of Science and Innovation (DSI) – and the Mandela Mining Precinct can be key in establishing the foundation of a hydrogen economy.

HySA is tasked with developing fuel cell technologies, which can revolutionise the energy and transport industries. The precinct – a public–private partnership between the DSI, the CSIR and the Minerals Council – focuses on the sustainability and modernisation of mining, and the implementation of the South African Mining Extraction Research, Development and Innovation strategy, which seeks to harness innovative technologies in mining.

As reported by Engineering News & Mining Weekly in January, the Minerals Council believes that significant potential can be unlocked for the mining industry and the South African economy if, by 2050, 30% to 50% of the world’s electricity and transport were provided by clean hydrogen-powered platinum fuel cells. Further benefit could be had if the country were to be the dominant source of intellectual property for clean-hydrogen, fuel-cell-powered mining vehicles.

Therefore, the continued and increased public–private collaboration in developing hydrogen industries could reinvigorate the South Africa economy, while aligning it with the global trend towards ‘greener’ solutions, comments Langenhoven.

Steps in the Right Direction

Minerals Council CEO Roger Baxter formed part of the Business Unity South Africa (Busa) team that participated in the negotiations that led to the development of the Recovery Plan. “As such, there were many inputs on behalf of mining,” comments Langenhoven.

He notes that, in line with Busa’s call, a taskforce to address the illegal and illicit economy has been reconstituted. Aside from armed gangs attacking refineries and operations, the theft of Transnet property and infrastructure is another concern.

One of the suggested solutions is the use of drone surveillance on railway lines. Langenhoven notes that, while the parties involved are still negotiating means of surveillance for the entire RBCT line, they know that it works, because the introduction of 24-hour surveillance of the fuel service pipeline has led to a noticeable reduction in incidents.

He adds that, in terms of reducing backlogs for thousands of mining licences and approvals, “about 20% of the backlog has been worked through, which is key in getting investment flowing”.

On replacing the current SAMRAD cadastre system, Langenhoven wryly notes that “the best cadastre system available was built in Cape Town. It’s now co-owned by a Canadian company but is used worldwide. It’s been suggested that the company could implement this system here within six to nine months, but the department felt it prudent to redesign the system, rather than implement an off-the-shelf solution”.

Nevertheless, a tender for the cadastre system has been issued.

Further, an exploration strategy, developed jointly by industry and the State, was drafted within weeks of the publication of the Recovery Plan and is awaiting Cabinet approval. Langenhoven notes that the industry is disappointed with the delay, seeing that the strategy was drafted in December 2020; however, there are hopes it will be published by year-end.

Possibly the most welcome development since the publication of the Recovery Plan was the President’s announcement to increase the embedded generation threshold to 100 MW – especially since the Minerals Council had asked for an increase to 50 MW.

Following the announcement, the Minerals Council committed to working closely with the Department of Mineral Resources and Energy (DMRE) and Eskom to ensure that at least 1.6 GW of largely renewable and private-sector-funded embedded generation projects for mining companies would come to fruition. Its initial estimates were that this development could lead to an additional short- and medium-term investment of about R27-billion.

Langenhoven adds that developing means of shortening and/or expediting the licensing and environmental approval processes is needed to capitalise on the opportunities presented by the threshold increase. Further, an agreement on wheeling electricity on Eskom’s grid needs to be reached to improve the viability and sustainability of these projects.

Meanwhile, in light of the Pretoria High Court judgment overturning provisions of Mining Charter III, Langenhoven suggests that this could renew some interest in exploration, assuming the DMRE does not lodge an appeal.

However, he cautions that a lack of certainty may stay investment decisions.

Law firm Fasken senior associate Mmaphuti Morolong agrees, noting that “regulatory certainty, especially with regard to shareholding, is one of the drivers of foreign direct investment in the mining industry, and it is unlikely that the High Court judgment has concluded the debate”.

Outlining the implications of the judgment, she notes: “If a mining right holder previously achieved the 26% black economic empowerment (BEE) shareholding target, it is recognised as being empowered for the duration of its mining right and will not be required to top up its BEE shareholding, even if its BEE partners have subsequently disposed of their shareholding.

“Right holders do not need to comply with the provisions of Mining Charter III in relation to inclusive procurement, supplier and enterprise development, and noncompliance with Mining Charter III will no longer render a mining company in breach of the Mineral and Petroleum Resources Development Amendment Bill and therefore at risk of having its mining rights suspended or cancelled.”

Morolong suggests that companies will likely need to comply with certain Mining Charter III obligations, in so far as they relate to the communities in which they operate, to maintain their social licence to operate. “The extent of the procurement targets and community development obligations will be dependent on agreements reached between right holders and the relevant communities and, irrespective of the percentage BEE shareholding target, we are likely to see more, or a higher, BEE shareholding comprising communities and employees.”

Langenhoven stresses that the mining industry remained committed to transformation and the High Court judgment had not changed that view.

The Minerals Council notes that, while there has been welcome progress on infrastructure reform, more urgency is needed to unlock the economy.

“Greater collaboration and a focus on joint problem solving will lead to better solutions and practical implementation. The five most critical structural and institutional reforms are the urgent stabilisation of South Africa’s fiscus; opening up Transnet and Eskom to private investment and competition; complete reform of the civil service; improved law enforcement to halve crime in three years; and creating policy and regulatory certainty to create global investment competitiveness.”

Langenhoven stresses that, given that the State’s “coffers are empty”, stabilising the fiscus will take time. Further, as the various government departments are “hamstrung by their lack of capacity”, the focus should be on increasing private-sector involvement by creating and implementing policies that enhance competitiveness.