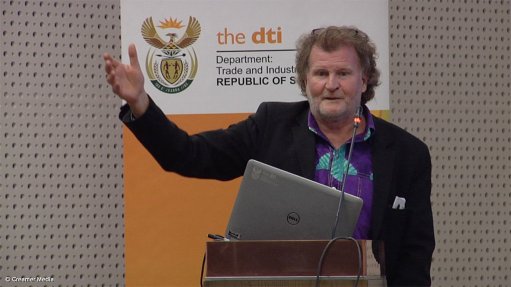 The former Mintek president says that even though mechanisation “massively” increases the quality of work in mines and dramatically enhances mine safety, it is often resisted because of job-loss fears. (Also watch Creamer Media video attached).

But, he adds, the Finns have proved that, provided the mechanised equipment is manufactured domestically, the employment opportunities are not lost but move from the mines to factories.

The contributor to the African Union’s ‘Africa Mining Vision’, who is a strong advocate of indigenous skilling, research, development and innovation, points out that off-the-shelf underground mining equipment does not work in South Africa’s mines, which need equipment that is tailored to suit local conditions and should thus be made in-country.

He estimates that a fully mechanised South African platinum-mining industry is likely to end up with only 100 000 of the current 200 000 workers but that concomitant local manufacture of the specialised capital equipment needed will plug job leakage.

“Mechanisation could be job neutral, and that’s important for us, provided the capital goods are manufactured locally,” emphasises the former African National Congress minerals and energy policy coordinator, who points out that there is a relatively high regional market for the specialised underground equipment required, which will underpin localisation.

The Southern African market for underground mining machinery is larger than those of Europe and North America.

“Our market is over 10% of the overall market in this niche,” he says.

South Africa currently spends less than 1% of gross domestic product (GDP) on research compared with more than 4% of GDP spent on research by Finland and Sweden, which is double the percentage spent by the US.

Using imported equipment to mine rather than supporting local development of the equipment increases foreign competitiveness and decreases intergenerational equity, says Jourdan.

With South Africa no longer having the Chamber of Mines Research Organisation and its 600 researchers, he believes that a new local mining technology entity needs to be created to underpin backward linkages, which are an importnat part of the mineral value chain.

As mines are national assets, he advocates that mining licences be conditional on companies using equipment that has high local inputs.

Foreign direct investment, which brings in rapid capital skills but not necessarily linkages because of centralised buying practices, should be indigenised over time without impacting negatively on returns, says Jourdan, who spent 16 years working outside of South Africa as a minerals economist during the struggle against apartheid. (Also watch attached Creamer Media video).