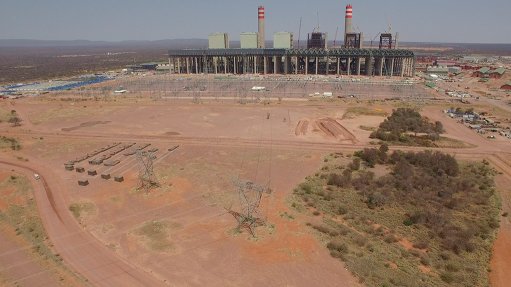 Public Enterprises Minister Lynne Brown confirmed on Thursday that the second 800 MW unit at the Medupi coal-fired power station project, in Limpopo, had been synchronised to the grid.

She said in a statement that Unit 5 – one of six being built as part of the 4 800 MW project – would become commercially operational by March 2018. The first unit, or Unit 6, began feeding power into the grid in March 2015 and entered commercial operation on August 23.

Medupi is being built in reverse order in terms of Eskom’s right-to-left nomenclature when viewing its coal-fired power stations from the perspective of the units in front of the stacks. The decision to reverse the order at Medupi was based on the discovery of a rock conglomeration on the southern side of the site, which made it more cost effective to build from left to right.

The project has been afflicted by technical and labour difficulties and is running years behind schedule and well over its initial budget.

In July, Eskom officially updated its cost-to-completion estimates for both Medupi and Kusile – the latter 4 800 MW project is being built in the Mpumalanga province.

The entire six-unit Medupi project is expected to be completed in 2020, while Kusile is expected to be in full production only in 2022, with the first unit, Unit 1, expected to begin producing commercially in the second half of 2018. However, synchronisation of Kusile Unit 1 is expected well before that date.

Synchronisation, Eskom explains, is when the generator in the unit is connected into the power grid so that it is aligned with all other generators on the national grid. It then starts to generate and deliver electricity into the grid over several months.

Brown congratulated Eskom for the synchronisation milestone, indicating that it was part of a broader build-programme acceleration being driven by the utility's new leadership.

“This year we have seen the Ingula station’s units 3 and 4 becoming commercially operational, while Medupi’s Unit 6 led the way in the second half of 2015. Over the past 18 months, we have seen 1 800 MW being added to the grid and the new build programme will add 8 600 MW of new capacity by 2020/21,” the Minister enthused.

“There is a new sense of urgency and a drive to succeed at Eskom,” Brown added, singling out CEO Brian Molefe and chairperson Dr Ben Ngubane for specific praise.

Molefe said the Medupi Unit 5 milestone further strengthened the position that "load-shedding is becoming a thing of the past".

Once completed, Medupi will be the fourth largest coal-fired power plant, and the largest dry-cooled power station in the world. Dry-cooling systems use air instead of water to cool the steam exiting a turbine.

The power plant also incorporates super critical technology, which is able to operate at higher temperatures than Eskom’s earlier generation of boilers and turbines.