Mali gold mine to use SA cooling solution 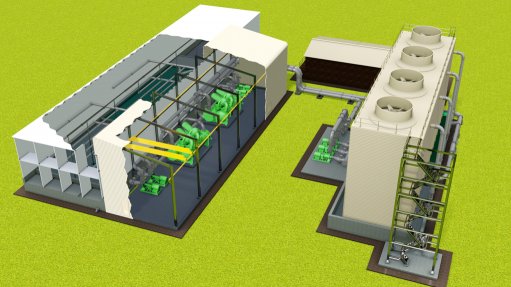 Mine ventilation, refrigeration and air-cooling installations provider BBE Projects has secured a $16-million order for two mine cooling systems at a deep-level gold mine in Mali.

“The addition of the cooling systems will enhance safety at the mine by improving the underground working environment and, subsequently, allow access to new ore reserves that would otherwise not be mineable,” BBE director Andrew Branch tells Mining Weekly.

The project involves the complete turnkey design and construction of two refrigeration and air-cooling installations on the surface at two new dedicated downcast ventilation holes at the mine.

With site work having started in November last year, the project is currently 70% complete, with the first cooling plant expected to be operational by end May and the second in August.

BBE projects MD Richard Gundersen notes that air will be drawn through the ventilation holes by underground fans, with the induced ventilation placing the surface air coolers under slight negative pressure, allowing for the selection of lightweight building materials for the shell of the air coolers, which, in turn, saves on costs and speeds up construction.

The coolers will each provide more than 14 MW of refrigeration (MWr) for the deeper levels of the underground operations. Each installation will comprise two 7 MWr dual-compressor York YD refrigeration machines running on R-134a refrigeration, producing chilled water for a horizontal spray chamber.

Branch explains that the air-cooling system is a custom-designed solution for the mine to facilitate transport to the remote mine site in Mali and to allow for its speedy erection by a largely inexperienced workforce under supervision of the equipment manufacturers.

“This was done by reducing civil work, using lightweight materials, such as a glass fibre reinforced polymer (GFRP), and buying equipment in knock-down form,” he notes.

Using lightweight building materials for the shell of the air coolers will also ensure savings on the overall cost of the installation, Gundersen states, adding that, “likewise, the condenser cooling towers for heat rejection will be constructed from lightweight GFRP components, at similar cost and with similar time benefits.”

Gundersen says the outer shell of the bulk air cooler will be assembled from 1 200-mm-wide steel-clad insulated panels fitting together in a tongue- and-groove manner, coupled with a light aluminium structure and attached alongside the main plant room.

He notes that using this material and the resulting compact layout will also contribute to high thermal efficiency, as chilled water from the refrigeration machine is sprayed directly into the intake air stream, with no thermal losses as a result of interconnecting pipework.

The design of the 50-metre-square plant has evolved over ten years, during which time 15 other similar projects have been completed, says BBE. About 100 employees have been employed to erect and commission the plant. Gundersen highlights that special consideration was given to the overall system efficiency and power consumption of the cooling system, as on-site generators provide most of the mine’s power supply.

“This affects several design parameters, such as the number of tubes in the heat exchangers and water flow rates in the two cooling circuits, as well as the size and, therefore, the thermal approach of the condenser cooling towers. The generators also required careful consideration of electrical start-up demands and . . . the dual compressor machines have halved the maximum instantaneous start-up current.

“Nevertheless, starting the plant will require cooperation with the power station to prepare for the build-up of an additional 3 MW electrical load onto the system,” he says.

Branch reiterates that, as the sites are remote, it was vital that the cooling systems were designed with minimum maintenance and ease of operation in mind.

“As a result, there is only one temperature- control valve on the water circuit in the entire plant and load control of the compressors is achieved through conventional inlet guide vanes.”

Servicing is set to take place at regular intervals, with original- equipment manufacturer technicians to lead the mine’s maintenance crew in some of the more specialised work.