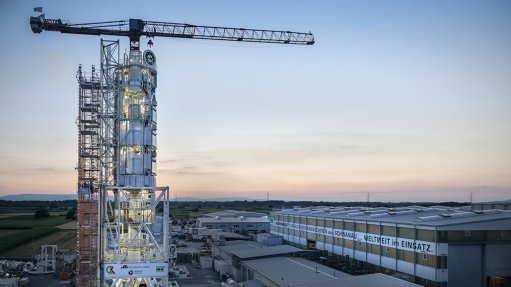 In July 2020, at the Nezhinsky mine, in Lyuban, Belarus, one of two SBRs had reached the final target depth of its shaft. This was done without a single reportable industrial accident occurring since shaft sinking operations began.

Faced with a tight time schedule, Belarus-based commodity producer Slavkaliy saw the possibility to quickly construct the shafts with the SBR technology to gain access to the potassium salt deposits. Redpath Deilmann was then commissioned by Slavkaliy and was responsible for constructing the shafts with the Herrenknecht SBRs. Slavkaliy expects to produce a volume of two-million tons a year of potassium salt.

Redpath Deilmann has further opened up access to this resource in the Nezhinsky mine with the SBR machines from Herrenknecht.

In the initial stages of the collaboration between the three companies, it was decided that the SBR technology would reach the target depth in soft and medium hard rock twice as fast as conventional methods, while also guaranteeing safety.

In the end, the customer’s expectations were exceeded, as the two high-tech towers sank two shafts at the mine in record time. The shafts are 750 m and 697 m deep. Both have a diameter of 8 m.

Both shafts in the Nezhinksy mine broke Redpath Deilmann’s company record, which was set back in 1938. The previous record was achieved thanks to practically nonexistent safety regulations, which makes the new record more impressive.

Since construction began at the Nezhinsky mine in 2018, the performance peaked in April last year, achieving up to 7.4 m a day.

The SBR is based on the proven Herrenknecht Vertical Shaft Sinking Machines (VSM), used for shafts of shallow depths.

The method has now been modified for mining with a hydraulically-driven rotating cutting drum, and an adapted backup area.

The hydraulically-driven SBR is telescopic. This means that the desired shaft cross-section can be adapted if needed, without costly retrofitting.

After the initial deployment of the SBR machines in Canada in 2018, the design of the SBR was further developed, in partnership with Redpath Deilmann. The work process was then continuously optimised at the Nezhinsky mine.

With the assistance of a data acquisition system, the advance rates were recorded, processes precisely analysed and initial weaknesses rectified.

Redpath Deilmann international projects VP Frank Otten states that the SBR fits “perfectly into the age of modern mining, where safety is paramount”.

“In conventional shaft construction, the miners stand at the bottom of the shaft while the drilling and blasting are carried out, with the air being constantly dirty,” he says. Herrenknecht AG mining GM Martin-Devid Herrenknecht agrees and emphasises: “People’s safety comes first.”

In Belarus, the machine operator controls the cutting drum from inside an air-conditioned control cabin.

Otten states that the SBR achieves optimal results when, at an early stage in the planning, client and service provider design the shaft to meet the specific requirements of the technology.

Owing to a water-bearing layer of earth, the ground at the mine was frozen to a depth of 165 m. A breach with a water ingress at the end of the freezing depth was the most significant challenge in the project.

Having reached a consensus, Slavkaliy, Redpath Deilmann and Herrenknecht agreed on efficient safety measures in the unstable geology.

Partnership for the Future

Herrenknecht product manager Patrick Rennkamp experienced the evolution of the SBR first-hand. This included about ten years of development work, involving deployment of the SBR prototype with mining contractor DMC Mining Services in the Jansen mine, in southern Canada, in 2018, before the deployment for the Nezhinsky mine.

“It’s as if we invented the bicycle with DMC Mining Services, and then with Redpath Deilmann developed the racing bike that wins the Tour de France,” he states.

Together, Redpath Deilmann and Herrenknecht evaluated the results of the reference project in Canada.

Herrenknecht engineers then optimised the pneumatic mucking system for the Nezhinsky mine, which removes the muck from the bottom of the shaft into a suction tank.

“Usually, we make progress of 1 m to 1.5 m of depth a day. Here we managed an average rate of more than 3 m a day,” states Niermann.

The efficiency of the operation allowed the site crew to start excavation in Belarus just six months after factory acceptance. A year and a half later, the target depth was reached.

“I realise the whole mining world is looking at our project in Belarus. In the end, the SBR worked better than I had expected, and even dared to hope,” Redpath Deilmann CEO Jochen Greinacher concludes.