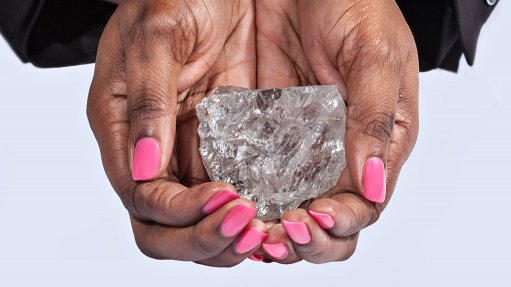 VANCOUVER (miningweekly.com) – It is one thing to find big flawless diamonds, but an entirely different ball game to sell large diamonds as big as the ‘Lesedi La Rona’ stone that Lucara Diamond Corp recovered from its Karowe mine, in Botswana.

“It’s difficult for people to understand what a rough diamond would yield. It’s hard for people to commit $70-million dollars to something when they don’t know what they’re going to get. It is a real problem,” Lucara president and CEO William Lamb told delegates at a mining symposium in Vancouver this week.

The 1 109-ct stone – Lesedi La Rona means ‘Our Light’ in Setswana – is currently the world’s largest uncut diamond and, according to Lamb, the wealth class needed to buy the Lesedi diamond is beyond the Ferrari-buying type.

He said the Abu Dhabi royal family recently came to view the diamond, but had to walk away disappointed, because it is so hard to visualise the potential end product when looking at such a large rough stone.

Lucara’s Karowe mine has quickly gained an industry reputation for producing large, flawless diamonds, fetching market prices high above the average realised for diamonds recovered from the Orapa mine, the largest diamond mine in the world owned by Debswana, a partnership between the De Beers company and the Botswana government.

According to Lamb, Lucara on average realises about $600/ct produced at Karowe, while the Orapa diamonds fetch only about $250/ct.

While Karowe only accounts for about 0.3% of global diamond output, the quality of its stones sets it apart from rivals.

For instance, to date, the Karowe mine has produced about 140 diamonds over 100 ct in size, whereas 70 years of diamond production of about 250-million carats on the Canadian shield produced only two stones larger than 100 ct. “We have the second-largest diamond ever found and about 30 of the 40 largest stones ever found,” Lamb advised.

The company’s ability to derive about 80% of its revenue from diamonds that no rival can find has also enabled it to reward shareholders with a progressive regular dividend policy of about C$0.10 a share (as at January 1), which has grown 67% year-on-year. The company also issues special dividends to distribute extra cash back to shareholders.

Lamb said he believed that the company can sustain its progressive dividend policy and grow the production portfolio. However, several holes drilled in recent months on targets did not warrant further exploration work. The company is working to publish a preliminary economic assessment for an underground operation at Karowe, which will also entail a resource expansion.