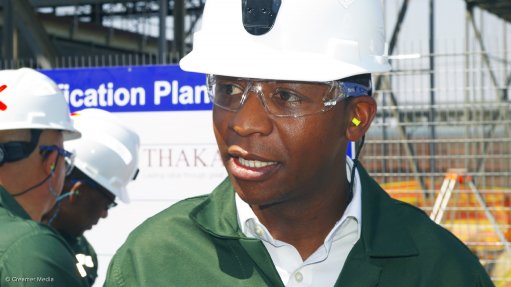 Mining Weekly can today report that Thakadu Battery Materials, which is producing high-purity battery-grade nickel sulphate for export, has a pipeline of new projects in place that will involve the use of the locally developed intellectual property, proven process technology and first-mover advantage to fast-track other assets under development in Southern Africa and North America.

In what is a huge story of world-class local innovation, Thakadu, operating as a completely independent startup, has succeeded in turning platinum group metal- (PGM-) linked nickel solution into sought-after battery material that is helping to make the world a greener place.

“We created our own proprietary process at Mintek working with a team of scientists. We’re now ranking our pipeline of projects and assessing where we’re going to go. By the end of the first half of this year, we’ll have a very clear direction,” Thakadu CEO Ruli Diseko, 37, told Mining Weekly in an interview at the weekend.

“It’s value-adding because it allows us to fast-track companies, which are trying to do what we have succeeded in doing, up the value curve,” said Diseko, whose Thakadu identified an opportunity at the bottom of the cycle, took a huge risk, borrowed money and succeeded in building its plant while facing considerable headwinds, the Covid-19 pandemic notwithstanding.

Mining Weekly can recall that when Thakadu began investing that borrowed money in its plant in Marikana from 2016, its counterparty, Lonmin Platinum, was in the midst of major financial strain. Today the Thakadu plant is resourced by top personnel who formerly served major BMRs at South Africa's large PGM operations.

“We’re very pleased that our refinery is up and running and managed by a very good team of professionals," said Diseko.

“We’re taking a waste stream and we’re applying process technology to add value and realise value from what would have been disposed of at a much lower value. This is really a very straight forward example of economic value add and we’ve created jobs through a new business where there was none, and the industrial asset we’ve created can go on for many more decades.

“We have a platform now, with an asset that produces high-grade battery material into new-era global demand that is aimed at greening the planet. It’s timing is absolutely right because we did our feasibility study at the bottom of the cycle  and now we’re in production," he said.

“I think it’s pretty significant that we’re an innovative startup that’s invested in its own proprietary process technology that produces high-purity battery chemicals. If you go back to sustainability and responsible sourcing, you would see that if there were a cost curve, we would be right at the bottom of that cost curve.

“We’ve been creative, innovative and we’ve used technology to put us in a position where we can focus on by-product, and to me that’s a more ethical and responsible way of sourcing and producing. We’re not hurting the environment, we’re actually using something that’s already there,” Diseko said.

The nickel sulphate solution piped for processing from the BMR was formerly crystalised and sold as lower intermediate.

Thakadu’s ingenuity is that it has managed to get advantaged economics out of processing at source, within a long-standing PGMs processing environment.

When the cathode-focused product gets to export destinations, development into precursor materials requires even more advanced chemistry. Depending on the chemistry, is could become, for example, nickel-cobalt-aluminium oxide, or nickel-cobalt-manganese, at the different combinations used in different batteries.

“Our goal is to turn the one-asset platform we have into a multi-asset platform, and it will be multi-metal so that we can offer companies their nickel, cobalt and manganese. That’s the direction we’re going in, but at the high-purity end.

“Even in our plant we produce a cobalt hydroxide, but the difference between an hydroxide and a high-purity battery chemical is like the distance from there to China. It’s a big thing. That’s why, when people talk about battery metals, it’s normally about mines. But when somebody starts talking about battery materials, it’s people who are close to the downstream real value-addition, where the actual innovation, the actual technology happens, and that’s where we feature,” Diseko explained.

The plant investment has a 60%/40% split between debt and equity, with Thakadu getting 40% of the $20-million invested from private sources, which indicates its skin in the game.

"We think we’re well positioned to ride this upswing in battery metals demand,” said Diseko, who started out in 2005 as an economic analyst at South Africa’s Department of Trade and Industry, after graduating with a BCom from the University of Cape Town (UCT), a postgraduate diploma in business administration from the Gordon Institute of Business Science, and a Master of Business Administration from UCT.

Nickel demand from the automotive sector is growing rapidly, with electric mobility expected to represent the single-largest growth sector for nickel demand over the next 20 years.

According to commodity research firm Roskill, nickel sulphate consumption has grown at 20% a year since 2014 and that has primarily been driven by the rapidly growing electric vehicle battery sector.