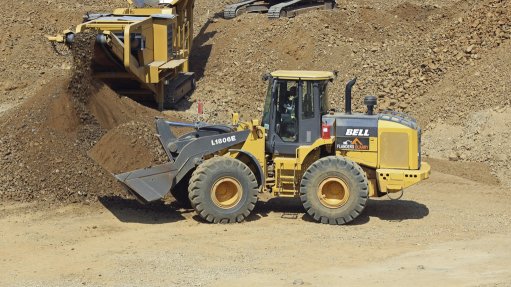 BIGGER AND BETTER The first Bell Loader supplied to Flanders Quarry improved its productivity substantially because it was a bigger machine, quicker and more robust

An investment in three Bell wheel loaders to drive down the rand-per-ton cost of aggregates production, is paying off handsomely for the owners of Flanders Quarry, in Mount Edgecombe, Durban, enthuses South African mining machinery and equipment manufacturing company Bell Equipment.

Flanders Quarry is managed by engineers Karl Stott and Leroy White, and mine health and safety director Tholie Cibane. Stott and White are the company’s managing and technical directors respectively.

The company was established at the end of 2011 on the premise that construction of property management company Cornubia’s massive development was imminent and that, as a result, Flanders Quarry, in Mount Edgecombe, would be “a veritable gold mine” from the onset, Stott says.

“The quarry had been a borrow pit for [agriculture and agriprocessing business] Tongaat-Hulett. A large part was used for the construction of the Gateway complex, but then demand fell away. We approached Tongaat-Hulett to revive it in anticipation of the work that was to come from Cornubia. However, as so often happens with construction, it didn’t take off as quickly as we thought and we limped along with a few contracts and a much less sophisticated product range than we have now,” he explains.

At first, Flanders Quarry hired an excavator and a dozer.

“The following year, the quarry bought two excavators and a wheel loader, and, by 2013, we were able to start investing in a crushing plant and the business began to grow. Today, the company has a fleet of five crushing plants, which are fed by a fleet of excavators.”

In mid-2015, Flanders Quarry decided that its initial brand of excavator and wheel loader was not well suited to a heavy-duty mining application and introduced a Bell L1706E.

“Our first Bell loader improved our productivity substantially because it was a bigger machine, quicker and more robust. We were able to halve the rand-per-ton cost using the Bell loader rather than the excavators we initially [used]. If you’re doing 500 000 t/y, that’s a R1-million saving straight on the bottom line,” says White.

“When the business expanded, we approached Bell at the end of 2016 for another L1706E.

“We bought this second unit and the initial forecast was that there would be a delay in delivery. In that time, our Bell sales representative, Blake Phillips, supplied us with a preowned L1806E as a standby machine so that we could maintain production rates. Our new machine arrived earlier than planned; however, in that period our sales escalated and we found that we were still short of a machine, so we decided to also buy the L1806E because it had been running well after a few initial teething problems.”

Flanders Quarry follows a “rigorous” procedure when buying any new equipment. According to Stott, when looking for wheel loaders, the company decided that it would only consider machines built in Europe, America, Japan or South Africa.

“We’ve learnt the hard way that these machines are more robust. The quality is better – you have fewer breakdowns and greater efficiency. That gave us a shortlist, and then we looked at the rands and cents of how much each machine could move for the initial capital cost. When we [considered] the bucket size on the Bell, [we realised] it outclassed the competition by a long way. It’s got the same bucket that you find on competitor machines that are much bigger and cost substantially more.

“We went to everybody, but Bell was the only company that was prepared to change the bucket size to suit our operation. Bell was the only one to say, ‘Yes you can do this; we will do it for you, and we will guarantee the machine’,” states Stott.

Apart from the capital cost and the cycle time on the bucket, diesel consumption was another critical factor and Flanders Quarry has been impressed with the fuel consumption of about 14 ℓ/h.

An L1706E and an L1806E are currently operating at the Mount Edgecombe quarry, a 5 ha site that produces G-grade material ranging from G5 to G9, which is supplied to Cornubia and the surrounds, as well as the N2 highway upgrade at Mount Edgecombe.

This quarry will be depleted in the coming months and Flanders Quarry is in the process of setting up an operation at its Canelands quarry between Verulam and King Shaka International Airport. The second L1706E is deployed at this 12 ha site, which has a 10- to 20-year life span and about seven-million tons of material – “infinitely more than the Mount Edgecombe quarry”.

The new quarry will also enable the company to offer blue stone products for the first time.

“Our machines work hard, about 220 hours a month, and they load and stockpile constantly. [In April], we did close to 100 000 t of material between our two quarries,” says Stott.