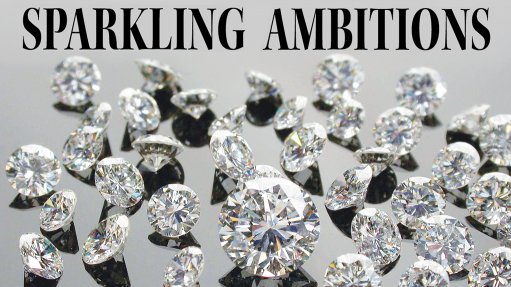 The mining industry in Lesotho is still in its infancy, but it is developing and has a lot of potential, says Lesotho Mining Minister Lebohang Thotanyana.

In 2015, Lesotho adopted the Minerals and Mining Policy – the first time that the country has developed a policy specifically focused on its mineral resources sector.

“I think it provides us with a very solid foundation for our mining industry policies and regulations,” Thotanyana states, adding that the policy was largely influenced by the Africa Mining Vision – the African Union’s blueprint to develop the mining sector in Africa.

The Minister tells Mining Weekly that Lesotho’s government is also undertaking legal reforms to modernise minerals legislation. However, he emphasises that these changes will not create a position of uncertainty because the rights of companies that have concessions in Lesotho will be secured by the new legal regime.

“We believe that during . . . the current financial year, the new mining legislative framework will be in place. We have started consulting with industry stakeholders and the drafting of a new legislation will start soon,” he remarks.

Thotanyana says government wants to ensure that laws are in place that will primarily promote investment in the sector by clarifying and securing investors’ mining assets.

The Minister stresses that it is critically important that these laws are instituted according to international standards, particularly in terms of environmental protection and health and safety standards, as “this will ensure that Lesotho’s mining industry is sustainable in the long term”.

The mining industry contributes 7.7% to Lesotho’s gross domestic product; however, the country aims to increase this contribution to 10% over the next five years.

Thotanyana points out that diamond mining company Gem Diamonds’ Letšeng mine, in the Maluti mountains, has been Lesotho’s only diamond mine for many years.

However, diamond resources group Namakwa’s Kao diamond mine, in the Butha-Buthe district, came into operation in 2012, with the mine’s full effect on the country’s economy “currently being felt” as it has resulted in increased revenue generation.

Additionally, the Minister highlights that four new mines are set to open in the next year. These include diamond mining and exploration company Firestone Diamonds’ Liqhobong diamond mine, also in the Maluti mountains. He notes that Firestone is spending $220-million to develop the mine and will produce about one-million carats a year over a 15-year life-of-mine.

“We are also concluding the Mothae diamond mine transaction. Government is looking for a new operator for the mine, which is about 6 km from the Letšeng mine,” states Thotanyana.

Mining Weekly reported in November 2015 that diamond company Paragon Diamonds had entered into an agreement to buy diamond company Lucara Diamond Corporation’s 75% stake in the Mothae mine for $8.5-million. Government approved the deal, but Paragon is yet to complete financing for the acquisition.

The Minister further notes that French resources investment company Batla Minerals’ Kolo diamond mine, in Mafeteng, and Paragon Diamond’s Lemphane mine, in the Maluti mountains, are expected to enter production over the next two years.

“We want to increase Lesotho’s diamond production from its current 350 000 ct/y to about 1.5-million carats a year over the next two years,” he asserts.

Thotanyana believes that this is “very possible”, as production at Liqhobong is targeted at one-million carats this year.

Additionally, the Minister highlights that the mining industry is a significant provider of jobs in Lesotho, where there is a high unemployment level of 27%, with 37% of youth unemployed.

He says the mining sector directly employs about 3 000 people and it is envisaged that this figure will double as the new mines come into production over the next two years.

Lesotho’s Mining Ministry will establish the Lesotho Diamonds Centre (LDC), in Maseru, this year, which will be a diamonds exchange platform for the buying and selling of diamonds.

The Minister estimates that the initial establishment of the LDC will cost about M10-million, or R10-million. He tells Mining Weekly that the centre is intended to improve access to diamonds in the country, which is a long-standing challenge. Lesotho is a diamond-producing country, but it has not been possible to buy diamonds directly from Lesotho.

“If one wants to address issues of beneficiation, it is imperative that diamonds are available locally to beneficiate.”

Thotanyana explains that the LDC will initially be a small Ministry-driven project, which will focus on the evaluation of diamonds by grading and sorting the gems, as well as securing government revenues obtained from royalty payments. It will also be mandated to collate correct data on the volumes of exported diamonds, which is a key requirement of the Kimberley Process.

Meanwhile, he says the LDC will initially be located at the Mining Ministry’s offices, in Maseru, but the long-term vision is to have it at or near to Moshoeshoe I International Airport, also in Maseru, to ensure that buyers can have easy access to the centre.

“This will also ensure greater security for the diamonds and buyers, as the diamonds will not have to be transported great distances.”

“Further, we want to use the LDC to address issues of artisanal and small-scale mineworkers because the country does not have this industry subsector in place – at least not as a legal, State-regulated industry.

“We cannot grant people licences when they do not have a market to which they can sell their product,” Thotanyana explains.

The issue of illegal mining in Lesotho is currently very serious as the country has one of the highest concentrations of kimberlite intrusions worldwide.

“We have about 405 kimberlite bodies in Lesotho in the form of pipes, dykes or offshoots. This reality in a small country like Lesotho has resulted in villages and towns being built on top of large, valuable diamond resources, which means that ordinary people are often able to extract diamonds from their surrounding locations fairly easily,” the Minister emphasises.

Currently, the Ministry receives calls daily from police officials in South Africa informing them that people have been caught trying to sell illegal Lesotho diamonds in the country.

“Therefore, it is a matter of necessity for us to manage this issue and the only way we can do this is by formalising the artisanal and small-scale sector and ensure that they can sell the diamonds they discover legally in Lesotho,” Thotanyana states.

Thotanyana tells Mining Weekly that Lesotho’s relationship with South Africa “needs to be worked on”, as there is not a great deal of intergovernmental collaboration on mineral resources-related matters.

However, he notes that a team from the Ministry toured South Africa for several months last year to study the country’s mining sector.

“Nonetheless, we are also very weary of what we take from South Africa, as not everything . . . is applicable or meets the requirements of what is needed by Lesotho to further develop our mining industry.

“Lesotho and South Africa also compete for the same investment in our respective mining sectors. Therefore, we have an obligation to position ourselves to ensure we can stand out to global investors and differentiate ourselves from South Africa,” the Minister emphasises.

Government regards knowing the precise extent of Lesotho’s mineral wealth “as a matter of great importance”, Thotanyana says; hence, it is providing a budget for the Ministry to undertake the Lesotho Geochemical Mapping (LGM) project.

He stresses that Lesotho has to diversify its mining sector as much as possible to “aggressively attract” investment because mining has been identified as one of the key economic enablers by the country’s official policy document, the Nation Strategic Development Plan.

Government has, therefore, placed major emphasis on mineral research and ensured that this information is easily available to all potential mining investors.

In 2015, the Ministry released 33 new mineral geological maps of Lesotho and an additional 33 such maps were updated. The Ministry intends to complete the mapping this year.

“In addition to the LGM project, we are working with Japan Oil, Gas & Metals National Corporation, which is employing remote-sensing satellite technology to identify the country’s mineral resources.”

Thotanyana points out that potential investors from China visited Lesotho in January on a fact-finding mission to assess exploration and development opportunities.

The Minister also informs Mining Weekly that large multinational mining companies have expressed interest in investing in the country’s mineral resources sector. “We are currently in advanced negotiations about facilitating their entry into the country.”

Moreover, Thotanyana points out that government has provided funding to build a laboratory in Maseru to allow for in-country research and provide, besides other services, indicative mineral resource reports for exploration and mining companies.

Although the cost of building and equipping the laboratory has not yet been finalised, government has allocated M76-million, or R76-million, for the laboratory project that will be undertaken in phases. The Minister predicts that the laboratory will be operational by the first quarter of 2018, with limited capacity, which will be expanded over time.

Thotanyana says the laboratory will accelerate turnaround times for exploration and mining companies, which currently have to send test results to South Africa for analysis.