Kinross to proceed with Tasiast Phase 2, Round Mountain expansion projects 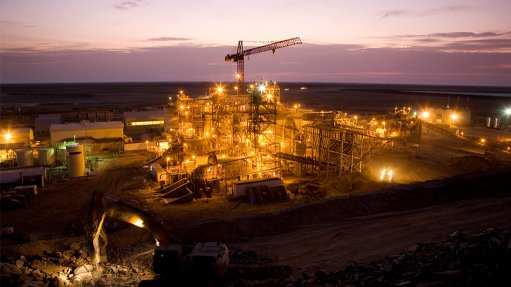 VANCOUVER (miningweekly.com) – Senior Canadian miner Kinross Gold has revealed that it will spend about a $1-billion on two significant capital growth plans for Phase 2 expansion of its Tasiast mine, in Mauritania, as well as Phase W of the Round Mountain mine, in Nevada.

“With Phase 2, Tasiast's annual production is expected to increase to more than 800 000 gold ounces per year for the first five years and significantly reduce costs. This strong improvement in Tasiast's performance is expected to positively impact overall company performance metrics, strengthening our production profile and increasing cash flow," stated president and CEO Paul Rollinson in a news release, adding that Kinross has applied the same financial and technical rigour to the Phase W expansion at Round Mountain.

"Lower operating costs, combined with an optimised mine plan, have contributed to a further de-risking of the project and improved returns. Phase W is expected to add five years of mining at one of our best-performing operations,” he said.

The expansion would replace the two current ball mills with a new larger ball mill, as well as add new leaching, thickening and refinery capacity and additions to the mining fleet. A new power plant will be added to power the 30 000 t/d mill, which is forecast to have an average output of about 812 000 oz/y of gold for its first five years of mine life (2020 to 2024), with a forecast cumulative gold production of 6.3-million ounces of gold from 2020 to 2029.

The Phase 2 feasibility study was based on an assumed gold price of $1 200/oz and an oil price of $55/bl, resulting in an estimated incremental internal IRR of 24%. The combined two-phased expansion has a net present value (NPV) of $1.43-billion (after tax and unlevered, from January 1, 2018 forward). The two-phased expansion is expected to generate $2.2-billion in after-tax free cash flow over the life of the mine.

With the go-ahead decision for Phase 2, a project team has been established and advanced engineering has started. Kinross advised that procurement of critical work equipment packages is advancing, as the construction period is expected to start by early 2018, with Phase 2 commercial production expected by the third quarter of 2020.

Meanwhile, the Tasiast Phase 1 project continues to progress well, being on time and on budget, with full commercial production expected in the second quarter of 2018. Plant construction is now two-thirds complete.

The semi-autogenous grinding mill is now in place and work has started on the installation of its gearless motor drive. Mechanical installations at the crusher, conveyor, stockpile and in the existing plant are proceeding well, according to the company.

Further, the oxygen plant has been commissioned and is supporting the mine's current production, and the new tailings storage facility is expected to be operational shortly.

Despite the mine’s significant future upside, Kinross has not always had a happy story with the mine it acquired through the blockbuster $7.1-billion acquisition of Red Back Mining in 2010. The mine failed to live up to expectations and the gold price meltdown over the last few years prompted Kinross to book at least $6-billion in write-downs on the project.

ROUND MOUNTAIN
At Round Mountain, Kinross is planning a $230-million expansion that is expected to add a further 1.5-million ounces of gold to the life-of-mine plan, as well as generate additional IRR of 13% and an after-tax NPV of $135-million.

The Round Mountain Phase W feasibility study contemplates a layback of the current pit, construction of a new carbon-in-column plant and heap leach pad, additions to the mining fleet and equipment, and the relocation of some existing infrastructure.

Phase W is expected to generate incremental cash flow of $265-million, extend mining by five years from 2020 to 2024, and sustain the operation's yearly output at about 341 000 oz gold through to 2024, at an average cost of sales of $765/oz of gold. In addition to the upfront capital, the company expects to undertake non-sustaining capitalised stripping of $215-million between 2018 and 2020. LoM sustaining capital is expected to be $135-million.

Kinross said the Phase W feasibility study has optimised the project plan by finding efficiencies to lower the cost structure.

The operational team lowered mining, processing and general and administrative costs at the current operation through continuous improvement initiatives, directly benefiting the project mine plan. After the company acquired the 50% of Round Mountain it did not already own, the project team completed about 35 000 m of infill, metallurgical and geotechnical drilling and rebuilt the Phase W geology model based on drilling results and historical output, substantially increasing the team's understanding of the deposit.

Through mine plan optimisation and geotechnical analysis, a larger mineral inventory, now comprising about two-million gold ounces, compared with 1.3-million gold ounces in the 2016 scoping study, was included in the project. This increase includes higher-grade ounces at the bottom of the pit.

With the go-ahead decision for Phase W, procurement activities for long lead items and mining equipment have started, along with advanced engineering. Further state and federal permitting for the project is required and is proceeding as planned, Kinross advised.

Because of the Phase W feasibility study, estimated proven and probable mineral reserves at Round Mountain increased from 1.3-million ounces of gold as of December 31, 2016, to 2.8-million ounces of gold. This incorporates mining depletion of about 400 000 oz of gold from January 1 to July 31.

Kinross advised that it plans to finance both projects with its strong balance sheet and existing liquidity, as well as operating cash flows. As of June 30, Kinross had cash and cash equivalents of $1.06-billion, and available credit of $1.43-billion, for total liquidity of about $2.5-billion. Kinross also has no debt maturities until 2021.

Kinross’s TSX-listed stock on Monday fell about 6.63% on the back of a broad sell-off in the gold space, following a strong rally during the northern hemisphere summer. Gold spot prices in New York fell by 1% on Monday to trade at a bid price of $1 306.50/oz.