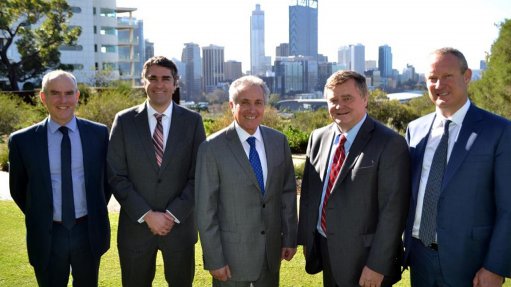 Under the terms of the agreement, SQM will invest $110-million, comprising a cash payment of $30-million to Kidman and a staged payment of $80-million to fund the initial development costs of the Mt Holland operation.

The funding will go towards completing feasibility studies at the project, funding the development and construction phase of the mine, processing plant and associated infrastructure, and funding the design and study phase of the refinery plant.

The project currently has an expected mine life of 50 years, and will underpin a long-life lithium refinery.

As an advance on the proposed JV expenditure contribution, SQM will provide a $21.5-million convertible loan facility to Kidman to allow the project to be advanced as quickly as possible, until all outstanding conditions precedent have been met.

The Mt Holland project includes the Earl Grey lithium deposit, which is estimated to contain a mineral resource of some 128-million tonnes, grading 1.44% lithium oxide for 1.84-million tonnes of lithium oxide. A feasibility study on the development of the Earl Grey deposit is under way, while a study into a proposed refinery to produce lithium carbonate or hydroxide has also started.

“The Earl Grey deposit has attracted significant interest globally. The decision to sign the binding letter of agreement with SQM was justified by its unmatched expertise in the lithium business,” said Kidman MD Martin Donohue.

“We see the partnership with one of the world’s leading lithium producers as compelling for shareholders. Their proposal to build an integrated lithium business here in Western Australia with a refinery plant drawing on SQM’s technical capabilities has a lot of merit, for both our shareholders and for the economic development of Western Australia.”

SQM CEO Patricio de Solminihac said that following the completion of a due diligence, it had become clear that combining Kidman’s project and hard-rock mining experience in Australia with SQM’s technical capabilities and expertise in the lithium business, would form the foundation of a new long-term, world-class lithium operation.

“We are very enthusiastic about both the project and investing in Western Australia. There are plenty of examples of Australian mining companies investing in Chile. Now a Chilean company is making a significant investment in the Australian industry.”

The Western Australian government has welcomed the investment by SQM, with Mines and Petroleum Minister Bill Johnston pointing out that about 200 jobs will be created during the mine site's construction phase and approximately 200 full-time jobs once operating.

At the refinery, up to 200 jobs are expected to be created during construction and 180 full-time processing operational jobs.

Kidman recently resolved a legal issue with regards to the ownership of lithium rights to the Mt Holland project. Fellow-listed Marindi Minerals claimed that Kidman had failed to comply with a binding agreement regarding the sale of lithium rights. Marindi believed the two companies had reached a heads of agreement (HoA) in April of 2016, via email. The alleged agreement would see Marindi acquire the lithium rights to the Mt Holland project, subject to Kidman retaining a 2% net smelter royalty return on all pegmatite minerals, and rights to all other minerals within the relevant tenements. However, Supreme Court Justice Kenneth Martin found there was a need for a binding and enforceable HoA to first be signed off between the parties, prior to the companies perfecting a binding agreement.