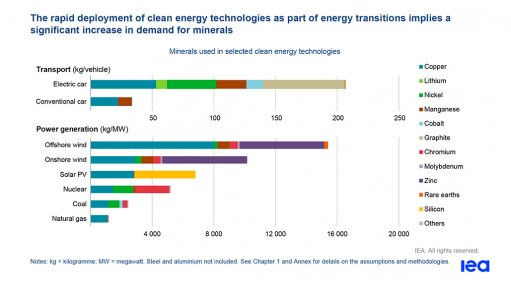 A new International Energy Agency (IEA) report is warning of a potential supply deficit for some of the ‘critical minerals’ needed to support a global shift in the energy system that is aligned with the Paris Climate Agreement, as well as the growing number of country commitments to cutting carbon emissions to net-zero by 2050.

Titled ‘The Role of Critical Minerals in Clean Energy Transitions’, the report outlines the metals- and minerals-intensity of technologies such as solar photovoltaic, wind and electric vehicles (EVs) when compared with their fossil fuel-based counterparts – a reality that is transforming the energy sector into a major force in mineral markets.

“Until the mid-2010s, the energy sector represented a small part of total demand for most

minerals. However, as energy transitions gather pace, clean energy technologies are becoming the fastest-growing segment of demand,” the reports states.

Since 2010, the average amount of minerals needed for a new unit of power generation capacity has increased by 50% and, since 2015, EVs and battery storage have surpassed consumer electronics to become the largest consumers of lithium, together accounting for 30% of total current demand.

The types of mineral resources used vary by technology, but the IEA analysis specifically assesses the major battery metals of lithium, nickel, cobalt, manganese and graphite, along with minerals and metals such as chromium, molybdenum, platinum group metals (PGMs), zinc, rare earth elements and copper, which is an essential element for almost all electricity-related technologies.

Steel and aluminium, which are also widely used across a broad range of technologies, have been excluded from the scope of the report.

IEA executive director Dr Fatih Birol warns that prevailing supply and investment plans for many critical minerals fall well short of what is needed to support an accelerated deployment of solar panels, wind turbines and EVs.

“Today, the data shows a looming mismatch between the world’s strengthened climate ambitions and the availability of critical minerals that are essential to realising those ambitions.”

Many minerals, he adds, also come from a small number of producers, with the world’s top three producers of lithium, cobalt and rare earth elements controlling well over three-quarters of global output.

“This high geographical concentration, the long lead times to bring new mineral production on stream, the declining resource quality in some areas, and various environmental and social impacts all raise concerns around reliable and sustainable supplies of minerals to support the energy transition,” Birol cautions.

Nevertheless, the IEA concludes that, despite inadequate investment currently, there is no shortage of resources worldwide, and there are “sizeable opportunities for those who can produce minerals in a sustainable and responsible manner”.

SHIFTING FROM FUEL- TO MATERIAL-INTENSIVE

The shift from a fuel-intensive to a material-intensive energy system means that companies that mine and process minerals have a major role to play in the energy transitions and the report notes that several mining majors have reduced their coal exposures, but that a “decisive shift towards the minerals required for energy transitions is not yet visible”.

The report notes that investment in new mineral supply projects has been on an upward path, but continued investment is needed to manage new price cycles and volatility.

“Despite the prospects offered by energy transitions, until recently companies were quite cautious about committing significant capital to new projects; this is largely because of uncertainties over the timing and extent of demand growth, as well as the complexities involved in developing high-quality projects.

“The picture is starting to change, as countries have sent stronger signals about their net-zero ambitions,” the report states, warning though that current supply and investment plans are not yet ready for accelerated energy transitions.

The IEA assesses the supply/demand outlook across various scenarios, including one that meets the Paris Agreement goals and which the IEA terms the Sustainable Development Scenario.

An even faster transition, to hit net-zero globally by 2050, would require six times more mineral inputs in 2040 than today, the report adds.

“In a scenario that meets the Paris Agreement goals, clean energy technologies’ share of total demand rises significantly over the next two decades to over 40% for copper and rare earth elements, 60% to 70% for nickel and cobalt, and almost 90% for lithium.”

Electrolysers that supply hydrogen and fuel cells that use it in vehicles are also seen as major growth areas in the scenario aligned with the Paris Agreement.

Both technologies could drive up demand for nickel and PGMs, but the market effects will depend on the shares of the different electrolyser types, with alkaline electrolysis depending more on nickel and proton exchange membrane electrolysers on platinum and iridium.

The report includes six recommendations for policymakers to foster stable supplies of critical minerals to support accelerated energy transitions, including a need for governments to lay out their long-term commitments for emission reductions, which would provide the confidence needed for suppliers to invest in and expand mineral production.