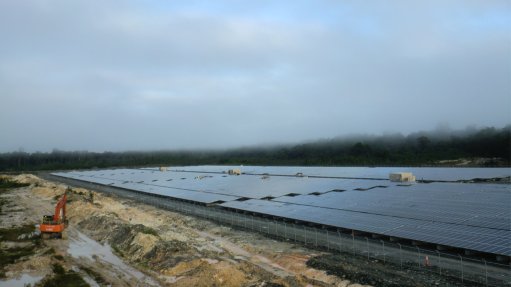 WASHINGTON – Toronto-based gold producer Iamgold president and CEO Steve Letwin is championing the use of renewable energy as an opportunity for gold mines to reduce costs – a proposition that the company is testing through its Rosebel gold mine, in Suriname.

Although saving money is an imperative for all mining companies operating in the current environment, Letwin was equally convinced that the sector needed to pursue a greener strategy on environmental grounds “to reduce the carbon we’re burning to produce energy.”

Energy and Mines, the organiser of the third Renewables and Mining Summit and Exhibition Toronto, which will take place on October 15 and 16, recently interviewed Letwin on his vision for Iamgold and renewable energy going forward.

Q. Can you tell us how you assessed and approved the decision to move ahead with a 5 MW photovoltaic (PV) project to provide power for your Rosebel mine?

A.  The project started with consideration of the overall energy requirements for the country of Suriname. The Surinamese population is growing, and so demands for electricity/power are growing. The government was also assessing our needs at the mine.

As we move into hard rock at Rosebel, our own power requirements are going to increase.

We worked with the government to come up with a strategy that would involve increasing the power supply in the country. As part of that assessment, we wanted to increase the amount of power coming from a renewable source in the country – which at the time was zero. Jointly, we talked about the benefits of developing a small solar farm and creating 5 MW of solar power available for the grid. Because of the needs of our own mine, it made sense that we’d build the grid on our site and supply the power into the grid for mine use or general use – depending on the time of the day.

Q. Is the solar farm in Suriname up and running right now?

A. It’s being commissioned as we speak. It’s a sight to behold. It’s an impressive solar farm.

Q. What were some of the key considerations at the management and board level when you considered solar as an option?

A.  We’re all trying to do our best to decrease the use of hydrocarbons. Because the hydro facility in Suriname could not be expanded in the foreseeable future, the obvious alternative was diesel generation. But we just thought that solar would be a better alternative to burning hydrocarbons. The major consideration was the green strategy: to reduce the amount of carbon we’re burning to produce energy.

Q. I understand that Iamgold is assessing options for a solar project to help power your Essakane mine, in Burkina Faso, which is in a more remote location than Rosebel. What are your key considerations at Essakane?

A. Essakane makes sense for solar power because it’s in the Sahel, in West Africa. The rainy season is very short in West Africa and the amount of sun power available at Essakane would be significant.

The challenge at Essakane is the wind blowing the sand. Solar panels have to be clean. If you accumulate any dust or sand on the panels, it has a significant impact on the amount of solar power that’s filtered to the cells. One of the key considerations is making sure that the panels are kept clean. We’re studying everything to make sure [the project is] cost effective.

Q. Why would you say energy is a top priority for you as CEO?

A.  Energy represents about 20% to 25% of our costs…. Most of our openpit gold mines have an ore grade of about 1g of gold per tonne, which means that we have to move 32 t of rock to produce one ounce of gold. You also need to crush the rock and that takes a lot of power. So crushing and grinding rock are very power-sensitive parts of our cycle. If we can reduce our power costs, we have a very positive impact on our all-in costs for producing an ounce of gold. In today’s environment, that’s a critical element of our go-forward strategy. If we can reduce power costs, we can improve our economics.

Q. So is cost reduction a main driver in your decision to invest in renewables?

A. Absolutely. Another driver is trying to reduce the amount of hydrocarbons we’re burning from an environmental standpoint. We’re very conscious of trying to reduce our hydrocarbon output. We wouldn’t be spending $12-million at Rosebel to build a solar plant if we didn’t think it was going to help our cost structure and also help the environment.

Q. How do you envision the global energy mix for your operations changing over the next three to five years?

A. In the next three to five years, I’d like to see 15% of our power generated by renewables, which is fairly significant.

Q. How would you like to see the renewables industry develop to better meet the needs of the mining sector?

A. There has to be more emphasis by the mining industry on the use of renewables. Because of the remote locations of mines, in many respects, using renewables is a superior solution as access to power grids or hydrocarbon fuels can be difficult and expensive to achieve. Developing larger solar farms makes sense where mines are already tied into the grid, as excess solar power can be fed into the grid during the day and drawn back again during the night. The renewables industry has to help mines understand the technology that’s available and then create alternatives that can be positively compared to hydrocarbon use.

Q. What is the tipping point at which energy self-generation begins to make sense from your point of view?

A. With the improvement in battery technology and solar technology, we’re going to see self-generation become more and more economically attractive. As that occurs, it will make the case for itself.

Part of the problem in the past has been having renewables compete on the same basis as hydrocarbons. But with the improvements of late in solar panels, the improvements in links to the grid, and improvements in battery technology and the ability to potentially store solar energy, all of this contributes to a future where you will see self-generation become more and more prominent.

I’m a believer that self-generation will occur – and that it needs to occur. Collectively, mankind is dumping 100-million tons of carbon into the air every day. Half of that gets absorbed into the oceans and into the plant life, but it’s still a lot of carbon entering the atmosphere. At the end of the day, we’re all going to have to do a better job reducing the amount of carbon we’re dumping into the atmosphere.

Letwin will be providing the keynote at the Renewables and Mining Summit, Toronto. Iamgold’s VP of commercial: South America Ron Halas will also present specifically on the Suriname project.