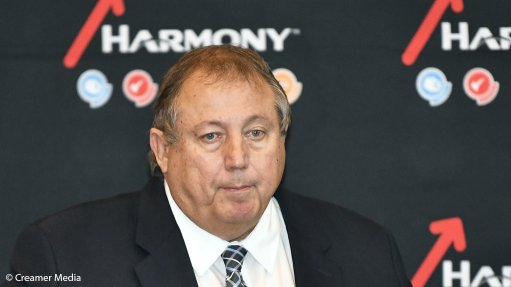 The net debt position of the Johannesburg- and New York-listed company as at December 31 was R4 290-milllion, a decrease of R632-million on the June 30 figure. (Also watch attached Creamer Media video.)

Responding to questions after the company presented its half-year results, Abbott said the company would prefer to fund any future acquisition using debt rather than equity.

When Harmony acquired the Moab Khotsong underground gold mine from AngloGold Ashanti, its net debt to Ebitda ratio was 1.3.

“It’s down to 0.7 today,” said Abbott, who is to be succeeded as FD by Boipelo Lekubo from March 3. Lekubo, a chartered accountant with extensive experience in group financial management and reporting within the mining industry, has been Harmony's CFO since June 2017.

Abbott, who will remain an executive director of Harmony, said: “We’re very happy with the way we funded Moab and we don’t have a problem with our net debt situation.

“At these gold prices, we’re very comfortable that we’ll be reducing our net debt significantly in the next 18 months to two years.

“When it comes to other acquisitions, the size of the purchase price would be a factor in influencing that decision.

“We would very much like to fund it with debt and not with equity, if we can, because we believe our share price is really under-valued and to the extent that we will fund it through debt, we will do that,” he said.

Net profit was R1.332-billion compared with a loss for the comparable period in the previous financial year.

Costs were up 6% on wages and electricity and production profit was up 21% by R4.1-billion

The company, which is hedged, has been able to lock in the current high prices for the long term.

“It’s actually better to hedge at high prices than at low prices. We’ve been hedging to lock-in margin and profit. We’ve done very well over the last four years and we’ll continue to hedge. It’s only 20% of our production, so it’s not like we’re capping the upside. But we really what to lock in these high prices into the future,” Abbott added.