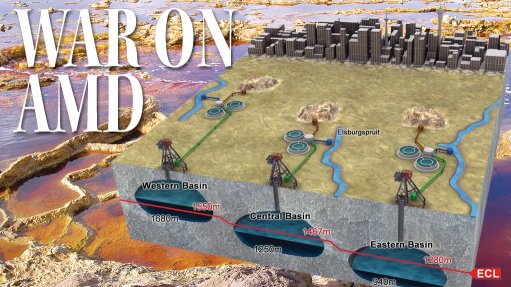 JOHANNESBURG (miningweekly.com) – Although acid mine drainage (AMD) in the Witwatersrand basin is the result of a legacy of environmental mismanagement of water resources by mines and lax enforcement of regulations by government, these role-players are working to constructively address this problem, says Department of Water and Sanitation (DWS) senior manager Marius Keet.

Keet was a speaker during the first day of black-owned training and conferencing company Intelligence Transfer Centre’s two-day EnviroMining conference, held in Johannesburg, in March.

The Witwatersrand basin, a largely underground geological formation that surfaces in the Witwatersrand region of Johannesburg, comprises the Western, Central and Eastern basins.

The ECL is the level above which the water in the mine voids at critical locations, which is where environmental features that need to be protected are at the lowest elevations. AMD should not be allowed to rise to this level, to protect specific environmental features, including groundwater resources.

“The treatment of AMD and water-quality management involves immediate, short-term . . . [and] medium- to long-term plans,” Keet explained, adding that the short-term solutions implemented to date had cost the DWS about R2-billion.

The neutralisation and removal of metals from AMD forms part of the immediate and short-term plan of dealing with AMD.

The removal of salt loads from river systems for direct use or desalination to potable-water quality forms part of the government’s medium- to long-term strategy for counteracting AMD.

Keet stated that the DWS’s monitoring of other sources of AMD, such as slimes dams, also improved the level of monitoring.

“Government has placed increased emphasis on the research of AMD to ensure that better decisions can be made in future,” he said.

The DWS is investigating the option of implementing an environmental levy, applicable to operating mines, to help cover the costs created by the legacy of negative environmental practices by mines in the Witwatersrand.

“I am aware that mining companies and the Chamber of Mines do not want to publicly discuss this issue, but it is a matter that government has been discussing for several years,” he said.

Additionally, he noted that government had undertaken emergency works in the Western basin in association with the Trans-Caledon Tunnel Authority to deal with AMD in the Witwatersrand.

This entailed the upgrading of gold miner Gold One’s Rand Uranium water treatment plant, in Randfontein, through the building of two new treatment trains and upgrading the old Rand Uranium train to the same standard of the new trains to effectively treat the AMD. The plant currently treats about 30 Mℓ/d of AMD and the quality of surface- and groundwater in the Western basin has improved significantly since an upgrade in 2013.

However, Keet added that the plant required further upgrades, which the DWS was undertaking, as AMD volumes were already higher than 30 Mℓ/d.

Keet said that, since April 2014, the plant had on average treated 56 Mℓ/d of AMD and could treat up to 84 Mℓ/d of AMD at full capacity, which was then discharged into the Vaal river system.

In the Eastern basin, at the Grootvlei mine No 3 shaft, in Springs, the DWS is developing an AMD treatment plant and pumpstation, which are scheduled to be fully operational by the first quarter of 2016. The facility’s operational target is to neutralise about 84 Mℓ/d of AMD.

Keet highlighted that about 170 Mℓ/d of AMD was pumped out of the basins.

“These AMD treatment plants are partial AMD treatment solutions, which entail the removal of metals and a significant reduction in the acidity of the water. However, these plants’ technologies do not completely remove sulphur from the water.”

The sulphate levels of partially treated AMD are reduced somewhat during the treatment process, but they still remain “unacceptably” high at about 2 500 mg/ℓ.

The partially treated AMD water is discharged back into the Vaal river system near the Vaal River Barrage Reservoir.

“The DWS has a commitment to downstream water users of the barrage to comply with a standard of 600 mg/ℓ total dissolved solids.

“Therefore, when partially treated AMD is discharged into the barrage that contains more than 600 mg/ℓ . . . that water has to be diluted with good-quality water,” said Keet.

He highlighted that the AMD dilution process would result in a yield reduction of water in the Vaal river system, which was likely to cause a substantial deficit of potable water in the system over the next five years.

“Even if the 2.2-billion-cubic-metre Polihali dam, in Lesotho, which is intended to supply water to Gauteng and which forms part of the Lesotho Highlands Water Project Phase ll, is completed during the next five years, there will still be a substantial water deficit.”

Keet stressed that the only feasible solution to this challenge was for the DWS to fund the building of desalination plants to further treat AMD and remove the saline water from the Vaal river system.

“A decision will be made soon by the department about the construction of these desalination plants.”

He added that mines must pay attention to not only AMD but also the broader challenge of establishing systems to manage mine water effectively from the earliest stages of the mine’s operations. “It is also imperative that effective mine closure plans are drafted and implemented to avert additional AMD challenges from occurring,” he emphasised.

The current AMD challenges in the greater Johannesburg metropolitan area could have been prevented, had government heeded the advice of the ‘Strategic Water Management Plan’ (Swamp) report in 1996, asserted DRDGold Ergo Mining operations director Jaco Schoeman during a presentation on the second day of the conference.

He pointed out that the JCI mining group made proposals to manage the flooding of the Eastern and Western basins of the Witwatersrand in the report, which was prepared by consulting environment engineering firm Johan Fourie & Associates.

The solutions proposed in the Swamp report were “shot down” by the DWS (then the Department of Water Affairs) because the department had “an issue” with the private sector selling treated water to State-owned water utility Rand Water, Schoeman said.

The gold mining industry reconvened in 2010 to provide a long-term solution for the DWA regarding AMD in all three basins.

“The gold mining industry, over . . . about seven years, spent R75-million on research, documentation, specialist studies and the development of pilot plants to establish a long-term solution for. . . AMD,” he stated.

During this period, the industry had developed several new technologies specifically to combat AMD, Schoeman pointed out.

He said the initiative to deal with AMD would have been fully funded by foreign investors, the Development Bank of Southern Africa and the Industrial Development Corporation.

However, the DWA also rejected this proposal in February 2011 for the same reason – “a result of regulatory and political ideologies” – it had rejected the recommendations of the Swamp report, he added.

Nonetheless, government would eventually have to implement the commercialisation of water to ensure that AMD was dealt with effectively, “otherwise South Africa could end up with another Eskom-type disaster, which the public will have to pay to fix”, Schoeman warned.

Schoeman said the commercialisation of water must be undertaken within a regulatory framework developed between the private sector and the regulator.

“One of the solutions that we presented as industry to the DWS in 2010 was that industry would have implemented these solutions on a totally open-book basis, whereby the costs of running a facility would have been the cost of the facility itself,” he noted, believing that this would have been identical to government’s receiving a loan from a bank to implement a project or a particular solution.

Schoeman further emphasised that industry’s proposal was “never” about a privately owned company selling water to the public. The proposal aimed to provide government with funding and to develop water-management infrastructure, with the intention that industry players only wanted to receive their return on investment.

“. . . government would still have collected the money from the public for the use of water and would not have surrendered its control over these water resources,” he concluded.