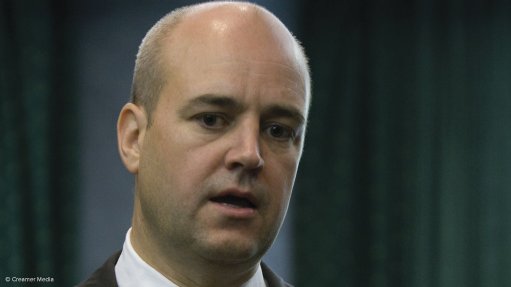 FREDRIK REINFELDT The EITI is pleased that another three countries have made meaningful progress and committed its continued support to others in their efforts to meet the standard
Photo by: Duane Daws

At a recent meeting in Bogotá, Colombia, the Extractive Industries Transparency Initiative (EITI) board agreed to assess the  performance of its 51 implementing countries against the EITI standard and found Ghana, Mauritania and Sao Tome and Principe to have made “meaningful progress”.

The EITI is a global standard to promote open and accountable management by countries of the revenue generated from the extraction  of natural resources.

The board also found that the Kyrgyz Republic, the Solomon Islands and Tajikistan had made “inadequate progress” and stipulated the corrective actions they need to take to continue on the path towards meeting the EITI standard.

“The board is pleased that another three countries have made meaningful progress  and committed its continued support to others in their  efforts to meet the standard,” says EITI chairperson Fredrik Reinfeldt.

Malawi published its first EITI report for the 2014/15  year in April this year. The mining sector in Malawi accounts for less than 1% of the country’s gross domestic product (GDP) and about 1% of government revenue, but developing the sector has become a government priority. The petroleum sector is at the exploration stage.

The Malawi report also covers the country’s forestry sector. The EITI notes that the country used to have the largest man-made forest in Southern Africa (Chikangawa), but, today, most of the 20 plantations managed by the Department of Forestry are degraded.

“Forestry resources across  the country are depleting rapidly at about 2.6% a year, given the reliance on fuel wood and the expansion of agricultural land. By also covering forestry, the EITI in Malawi aims to provide relevant and reliable information on  the governance of important natural resources in the country,” states Reinfeldt.

The total revenue for extractives reported was MK5.9-million, which equates to about $13.6-million. This comprised 49% from forestry, 40% from solid minerals and 11% from oil and gas. Rock aggregate, coal and agricultural lime were the top three minerals in terms of volumes produced and value. The report notes that most artisanal miners are informal and have not been included in the report.

In additional to key information on the contribution of the sector in the country, the report provides an overview of the relevant laws and regulations governing the sector, as well as information on licensing and contract disclosure. It highlights relevant reforms, such as the status of the ongoing review of the Mines and Minerals Act.

Further, the report indicates several areas where government systems might be improved to shore up revenues and reduce tax evasion, particularly related to the monitoring of production.

Some of the recommended next steps for Malawi include making the licensing process more transparent by clarifying the role of the Minister of Mines in granting licences and providing disclosure of the criteria for awarding licences.

The EITI says that the country’s licence cadastre should be reviewed to ensure that all existing licences are included, that information on these licences is complete and that inactive licences are removed. “The register should also include tax identification numbers to help track the payments,” it adds.

The report states that Malawi must develop procedures for collecting and controlling production data and should also improve its monitoring of non-tax payments, such as royalties and ground rent, in particular in the forestry sector.

The country also needs to address inconsistencies in its legal framework with regard to calculating royalties and must consider more regular disclosure of statistical information on the extractive sector.

“Ensuring that the information disclosed is reliable, including clarifying whether financial information has been audited, is also vitally important,” the report concludes.

The report and its recommendations will be an important tool to help Malawi become more transparent and accountable in the management of the country’s natural resources.