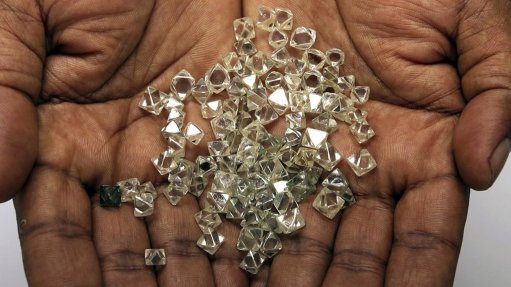 The global diamond industry is continu- ing to gain momentum, as there is a global scarcity of high-quality versions of the precious gems, which is diamond devel- oper Rockwell Diamonds’ market niche.

In terms of supply and demand fundamentals, the diamond industry outlook is, therefore, positive for the midtier miner.

“Since 2008, diamond exploration spend has been limited and, as such, few new diamond sources are coming on stream,” says Rockwell Diamonds CEO James Campbell.

He adds that, while about half of the world’s diamond demand comes from the US, there is market growth in China and India, as there is an increasing uptake for engagement rings in these countries, which is feeding demand in the middle-income market. At the top end, diamonds are increasingly regarded as a separate investment class among individuals of high net worth and specialist funds investing in rare diamonds.

“These positive fundamentals have supported the price of rough and polished diamonds, which has fully recovered since 2008. Even though there have been some transient single-digit corrections, the overall trend is that the price is going up,” says Campbell.

Diamond Demand Campbell says demand for high-value investment diamonds among high-net-worth indivi- duals, as well as institutional and private investors seeking alternate investment options, has been strong, as evidenced by results at various auction houses. “Investment diamond prices continue to break records and, based on historical performances, are expected to continue outperforming prior showings.”

Rockwell’s primary revenue is obtained through the consistent production of high volumes of quality gravels in the form of investment-type diamonds. Accordingly, its polished product is in the most secure product range with respect to price volatility. In January, Rockwell sold a 109 ct vivid yellow diamond, which was polished from the original 169 ct rough stone, recovered in September 2013, at the company’s Saxendrift Hill Complex mine, in the Middle Orange River region, in the Northern Cape.

The cushion-cut diamond was sold through Rockwell’s beneficiation partnership with processing industry supplier Diacore; its profit share will be recognised as beneficiation revenue in the first fiscal quarter of 2015.

Meanwhile, in the US, demand for diamond jewellery remains buoyant with the peak trading season between Thanksgiving, in November, and Christmas, representing half of the country’s yearly diamond sales. Although jewellers there have discounted prices in the last two Christmas trading seasons, volumes have grown and overall diamond prices have continued to increase, says Rockwell.

Downstream Development Rockwell Diamonds says it continues to support the downstream beneficiation of its rough diamonds by supporting local South African manufacturing companies. “The benefits of our joint venture (JV) with Diacore deliver exceptional results on certain large diamonds recovered by Rockwell Diamonds,” says Campbell. In line with its commitment to contributing to South Africa’s developing diamond industry, Rockwell has initiated a drive to create jobs not only at its mines but also further down the value chain. “To this end, we sell up to 10% of our run-of-mine to the State diamond trader in support of its commitment to sell these to local diamond cutters,” says Campbell.

The combined impact of sales through these channels means that more than 85% of Rockwell’s diamond production is beneficiated in South Africa. This has enabled the company to indirectly support the creation of more than 20 jobs for specialised diamond cutters in South Africa.

Skills Development and Training Campbell tells Mining Weekly that, despite legislation passed in 2005 to ensure beneficiation and skills development in South Africa, the overall number of qualified diamond cutters in South Africa has declined.

“There is a significant need to train and develop qualified diamond polishers and cutters in South Africa to ensure the sustainability of the downstream industry and generate positive returns for the domestic economy.”

Campbell says there is also a need to nurture the development of technical skills in the mining environment. This is another area where Rockwell Diamonds has been particularly active, especially in the geology and metal- lurgy fields.

The company has employed several young geologists and metallurgists – the number of whom increased from four in 2012 to 19 in 2013 – at plants in supervisory roles.

About the Joint Venture “When the new diamond legislation was promulgated in 2005, Rockwell approached Diacore with a proposal giving it first option to buy the company’s production of large, high-valued rough diamonds for cutting and polishing, with Rockwell sharing the upside value from the sale of these polished diamonds,” says Campbell.

The proposal led to the JV agreement, with Diacore not only increasing its ability to secure supply in this specialised segment of the market, where demand outstrips supply, but also entrenching its leadership position.

“The JV has since grown from strength to strength and Diacore has become a supportive shareholder in Rockwell, buying into the long-term growth strategy of the company,” says Campbell. The JV started in 2008 on a trial basis, with a 212 ct stone recovered from the Middle Orange River region. Rockwell was not convinced that the tender price for the stone reflected its true value, believing that the actual colour that could be achieved on the polished diamond was more valuable than that reflected in the rough diamond.

Based on this conviction, Rockwell Diamonds sold the rough diamond and participated equally in the profits on the sale of the polished diamond, generating an additional 50% in revenue on the rough diamond sale price.

The trial period for the JV was extended and forms part of the current JV in which Rockwell sells any stones exceeding 2.8 ct. Revenues received through this JV leverage Rockwell’s revenue from diamond sales by an average of 20% a year. Trends and Technology Rockwell says bulk X-ray technology is the most common technology currently in use in diamond mining.

“This technology is more automated, more effective in recovering diamonds and more effi- cient because it reduces operating costs. The technology eliminates the traditional pan processing plant and the multiple flow-and-sort machines, thereby using less power,” says Campbell, adding that the technology uses significantly less water than a traditional pan or dense-media separation plant and, therefore, has a much smaller environmental footprint.

No chemicals are used in the new high- throughput bulk X-ray process, which lowers the environmental impact. “The use of slimes dams also enables us to reuse the water repeatedly.” Rockwell Diamonds pioneered this X-ray technology in its operational environment, as the company uses it in the concentration and the recovery sections of the mine.

The efficiency of this new technology, compared with using traditional pan plants, was also put to the test in July 2013, when ores from the same part of the Saxendrift property were processed through the Saxendrift pan plant as well as the Saxendrift Hill Complex Bulk X-Ray plant. Using the X-ray technology resulted in a grade uplift of more than 40%.