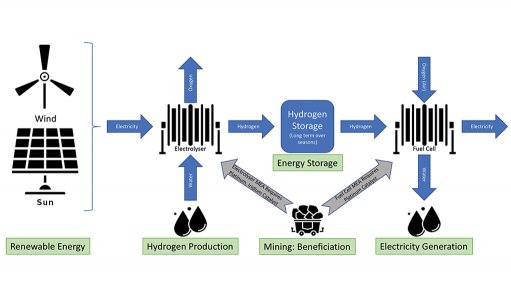 JOHANNESBURG (miningweekly.com) – If South Africans make use of their superior sunlight and their prime wind, they can generate a lot of carbon-free electricity at a cost potentially cheaper than when Eskom burns coal and pollutes the air.

That, in itself, is in line with the world’s decarbonisation demands. But there is more. For example, if one puts that clean electricity through water, in an electrolyser, one can generate hydrogen, helped by platinum and iridium dug up in South Africa’s many platinum group metals (PGMs) mines.

This hydrogen can, in turn, be sent to a fuel cell, where more locally mined platinum and ruthenium can be put to work, this time to persuade the hydrogen to generate electricity.

And that is still not the end of the PGM opportunity, which continues because hydrogen is an inherent electricity storage medium.

Unlike batteries, which run down, hydrogen can store electricity for days, weeks, months or years, and remains at the ready to become electricity at any time.

All this is done without a smidgen of carbon being emitted. Could the world ask for more?

Hardly, and this major, far-reaching, compelling and nationally unique opportunity is there for the taking, Isondo Precious Metals COO Dr Sakib Khan emphasised to Mining Weekly Online this week, ahead of next week’s major Nedbank fuel cell conference in Cape Town, which will be addressed by global academics and executives from the US, Europe and Japan, who have in-depth knowledge about the emerging world of hydrogen power, fuel cells, platinum catalysis and climate change mitigation, as well as by local industrial, mining and governmental stakeholders.

Last July, Amplats and the PIC each committed R1.3-billion to AP Ventures, the first venture capital fund of its kind specialising in pioneering technologies and businesses that make use of PGMs; this week the Toyota-Sumitomo Mirai Creation Fund II backed AP Ventures; and next week Nedbank mining analysts Arnold van Graan and Leon Esterhuizen will lay on a landmark conference that will outline a potential new horizon for South African PGM mining and manufacturing at a time when both are in need of economic stimulus. This will be followed up by a major feature on fuel cells in the Mining Weekly edition of September.

“If we don’t do something big and bold as a country, we’ll end up as spectators in an industry that is utilising our mineral resources,” said Khan.

‘If we let this opportunity pass us by, and remain mere consumers, we’ll continue to send our PGM metals overseas for others to add value to them and offer them back to us as finished product,” he added.

This immense opportunity, which the country should not allow to slip out of its grasp, follows yesterday’s dire warning by the automotive original equipment manufacturer Nissan that unregulated Africa is on its way to becoming the planet’s fastest developing polluter, after recording a 75% growth in vehicle emissions between 2000 and 2016. Moreover, the World Bank expects close to 137-million more light vehicles in Africa by 2040 than in 2015.

“This is wonderful as an indicator of economic development, but hugely problematic when you consider that most of these – by current trends – will be second-hand vehicles, imported as such into Africa,” Nissan Group of Africa sales and operations director Jim Dando told Mining Weekly Online’s associate online publication, Engineering News Online, on Wednesday.

Dando said the large influx of second-hand vehicles, which were never intended for Africa’s road conditions nor its poor fuel quality, presented a major risk to the health of the people of Africa, as well as the continent’s environment

There is only one indigenous solution to this looming crisis and that is the widespread marketing of Africa’s sun and wind power and the use of its very own PGMs to catalyse decarbonisation.

“Ideally, a coordinated country strategy that guides the overall industrialisation along the fuel cell value chain provides a pathway for the rejuvenation of the South African economy, representing a win/win strategy for government and industry alike. Isondo, via its project, is helping create a proof of concept that can be expanded with government and industry support,” said Khan.

Mining needs new sources of PGM demand, especially in the face of the propagation of battery electric vehicles (BEVs). Anti-diesel vehicle sentiment has already lowered the demand for platinum and a step-up in BEV demand could also lower demand for petrol vehicles, which would hurt palladium.

The adoption of fuel cell electric vehicles (FCEVs) would lower that existential threat to PGM mining and open the way for the manufacture of the key components that contain PGMs, including membrane electrode assemblies (MEA) for FCEVs, as well as fuel cells used for offgrid rural and telecommunications electricity and the electrolysers that produce the hydrogen for the fuel cells.

Load-shedding and insecurity of electricity supply not only knocked South Africa backwards in the last economic reporting period but also halt all prospect of significant economic growth that is power related.

“Do we really want to become another Nigeria, where all our buildings are operating from diesel generators, or will we take bold steps and say all government buildings must have fuel cells?” asked Khan.

Minerals Council South Africa, which generates its own electricity from a fuel cell at its head office building in Johannesburg, stated in its National Platinum Strategy document last year that fuel cells and the hydrogen economy posed attractive long-term opportunities for future PGM demand.

“There are clear benefits to South Africa adopting this technology in terms of local jobs and skills development and also in terms of the creation of additional platinum demand,” the council said.

“We have an opportunity to be developing the skills and the skilled labour to support the Fourth Industrial Revolution on the back of fuel cell energy,” said Khan.

Encouragingly, Trade and Industry Minister Ebrahim Patel promised during the State of the Nation Address (SoNA) debate in Parliament last month that legal entity for the Platinum Valley Special Economic Zone (SEZ) in North West, which already has an investment pipeline in place, will be set up in the next three months, and President Cyril Ramaphosa in his SoNA promised to “explore the potential of the hydrogen economy”.

Isondo is taking steps to manufacture the membrane electrode assembly (MEA) and other fuel cell value chain components, including catalysts and metal recycling, at its state-of-the-art facility at the upcoming OR Tambo International SEZ and another SEZ has been approved at Impala Platinum in Springs. Impala Platinum market development manager Fahmida Smith will be a member of a panel at next week’s fuel cell conference.

Fuel cell stacks are made up of a number of flexible polymeric membranes with PGM-containing catalysts and with each MEA having the capacity to generate a small voltage. MEAs are assembled proton exchange membrane (PEM) stacks.

Some fuel cell stacks have hundreds of MEAs, which enable them to generate many kilowatts of electricity, and local production of MEAs is seen as a step the country must take to promote the mining industry, which is one of the main drivers of the South African economy.