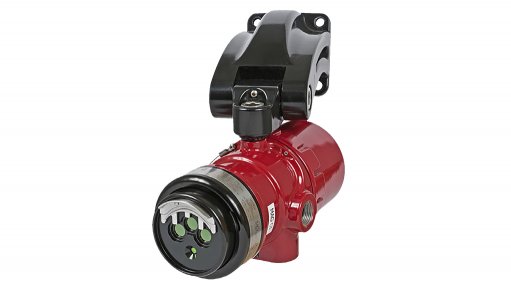 Since the launch of its new Det-Tronics X-Series range of flame detectors earlier this year, multinational home and industrial appliance manufacturer Carrier Global has noted a marked increase in demand for the detectors.

Carrier Global sub-Saharan Africa sales manager Randhir Seodutt attributes the increase to not only the series’ efficacy but also an uptick in plant ramp-up after care-and-maintenance periods .

“The detectors are supplied by Carrier for purchase through its authorised distributor network and direct partners,” he adds.

The X3302 was developed to detect hydrogen-based flames, traditionally one of the more difficult flame types to detect.

He explains that hydrogen is colourless, odourless, tasteless and nontoxic which poses a major fire hazard.

“When someone approaches a hydrogen flame, they will feel little heat as it emits very little IR,” he stresses.

In addition to being certified Safety Integrity Level (SIL) 2-capable and performance-certified by mutual insurance company FM Global, specifically in terms of FM 3260 standards for hydrogen fires, the X3302 is now FM approved to detect methanol, methane and syngas fires.

Seodutt points out that the series also carries other certifications, including those of standards organisations and certification bodies, such as the Canadian Standards Association and the European Union directives for minimum safety requirements for the workplace, known as ATEX; the International Electrotechnical Commission System for certification to standards relating to equipment for use in explosive atmospheres, or the IECEx system; the National Institute of Metrology; the Standardisation and Industrial Quality, in Brazil; and the California State Fire Marshal.

The X3302 has been performance approved at 38 m, on axis, for a 0.76 m hydrogen plume fire, which makes it ideal for applications in hydrogen storage, refining, aerospace, battery rooms and filling stations.

Seodutt adds that the X9800 IR flame detector offers an accelerated technology for high-speed detection in areas with IR sources.

The detector is enabled with time-domain signal analysis, or TDSA, which provides superior detection capability, while rejecting false alarm sources, making it a reliable detector for printing and industrial processes.

Meanwhile, the X5200 UV/IR flame detector leverages UV and IR technologies to detect fire quickly, with its auxiliary relay offering the flexibility to customise detection using UV, IR or both.

Seodutt explains that it is imperative that the optical flame-detection technology is applicable to the type of fuel it is expected to detect.

“To verify that a flame exists, a flame detector must see one or all of the flame components.”

In a flame fuelled by a hydrocarbon source, the components are carbon dioxide, carbon, water and heat, or IR. However, not all fires are the same, for example, a hydrogen fire will not emit carbon dioxide.

Owing to hydrocarbon- based fires being strong emitters in the IR spectrum, single- and dual-IR detectors are the most suitable.

UV/IR detectors have also been popular choices for sensing hydrocarbon-based fires because in combination, they produce fewer false alarms.

Seodutt says unlike hydrocarbon-based flames, hydrogen flames radiate energy primarily in the UV and water bands and, as such, “UV flame detectors are a logical choice”.

In terms of detecting both types of fires, the UV, UV/IR, and single- and dual-IR detectors are being replaced by multispectrum IR (MIR), or triple IR, detection systems.

He concludes that MIR technology offers better performance, fewer false alarms and, often, a lower cost of coverage than their conventional detection counterparts.