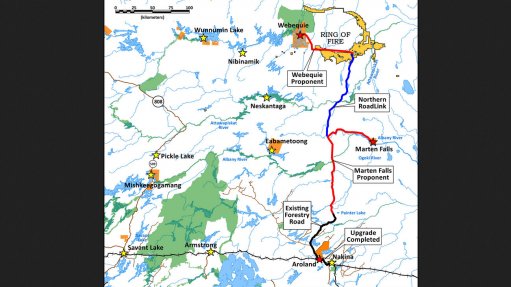 The Attawapiskat, Fort Albany and Neskantaga First Nations in the James Bay lowlands have declared a moratorium on development in the Ring of Fire, stating that their territories and rights could be “seriously and permanently desecrated” by large scale mining.

The First Nations argue that government has not honoured its obligations in terms of a regional impact assessment (RIA), which is meant to investigate the cumulative impacts of mining development in the area.

The RIA will focus on mineral deposits in northern Ontario, about 540 km north-east of Thunder Bay, which hosts significant discoveries of so-called critical minerals, including chromite, copper, zinc, platinum and palladium. The region has been described as a jobs bonanza for Ontario and the provincial government has pledged to support an access road to connect the deposits to a provincial highway.

However, the First Nations claim that the federal government, through the Impact Assessment Agency of Canada (IAAC) and in collaboration with Ontario, has “acted with duplicity behind our backs . . . to render the RIA little but political puffery, with mere token First Nation ‘involvement’, narrow in its focus and weak in its result.”

First Nations have been lobbying for the RIA,  including planning, to only start after the pandemic to ensure that First Nations could safety engage in the process.

“Despite Canada knowing of First Nations' intent and agreeing to time to develop this proposal after the pandemic crisis had ended, Canada now informs us it effectively had no intent of paying any attention to any such proposal; and that Canada and Ontario have been collaborating behind First Nations' backs for the last year to agree on the terms of reference for the RIA which they will show us in April ‘for comment’, and in which First Nations have nothing but token involvement.”

First Nations state that the moratorium will be lifted should Canada and Ontario agree to plan and conduct the RIA on terms that “respect our land and protect Mother Earth”.