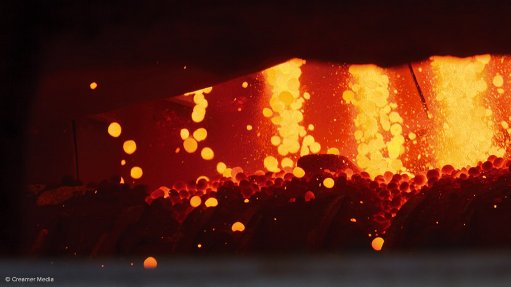 Instead, all four furnaces collectively use some 4 800 MWh a day.

The efficient use of energy – significantly enhanced through pelletising to cope with increasing volumes of fine chrome ore, in-house training programmes to overcome skills shortages and the proximity of the Port of Maputo, the use of more cost-effective upper group two (UG2) chromite ore recovered from platinum tailings, as well as radically reduced use of expensive coke – is the key source of the competitive advantage that places both phases of Lion – known as Lion I and Lion II – in a cost-leadership position.

The UG2 ore is sourced from the nearby Mototolo mine, a platinum joint venture between the London-, Hong Kong- and now also Johannesburg-listed Glencore, black economic-empowerment partner Kagiso Tiso and Anglo American Platinum.

The bulk of the smelter’s ore arrives by road from the Glencore Merafe Chrome Venture’s Thorncliffe and Magareng mines, which are some 25 km away, and the final ferrochrome product leaves by road in an area not served by rail.

“It’s friable, metallurgical-grade chrome ore, which we pelletise to produce the ferrochrome,” says Lion general works manager Dr Andre van Zyl, who gave Mining Weekly a conducted tour of the impressive plant in October. The plant is situated in Steelpoort, a mining town in the Sekhukhune district municipality, in Limpopo province, on the Mpumalanga province border.

Lion II, which was commissioned in May, doubled the 360 000 t capacity of Lion I to give the Lion smelter a combined capacity of 720 000 t/y of ferrochrome. Lion II was built at a capital cost of R4.9-billion and includes the Magareng mine.

The Glencore Merafe Chrome Venture owns and operates a number of chromite mines and 22 ferrochrome furnaces, with a combined installed capacity of 2.34-million tons of ferrochrome a year. Thirteen of these furnaces, situated at Rustenburg, Wonderkop and Lydenburg, use a combination of conventional semiclosed submerged arc furnace and Outokumpu pelletiser technology. The 396 000 t/y Lydenburg operation pioneered the Premus process ahead of its adoption at the Lion project. The Boshoek operation comprises two closed furnaces based on fully fledged Outokumpu pelletising technology including preheating.

Non-Premus options open to Lion included the off-the-shelf Outokumpu process or the direct current (dc) arc plasma process, the latter a big electricity consumer but one that processes low-grade raw material without the need for pelletisation.

Conventional processes recover 68% of the chrome from the chromite ore.

The Process The complexity of the plant lies mainly in its in-line process, which demands stability at every activity along the entire process chain.

Fine metallurgical-grade chrome ore from the mines, anthracite reductant and clay binder are mixed together and batched in ratios with the help of weigh feeders.

Cleaned carbon monoxide off-gas from the furnaces provides the heat for a drying process that removes all moisture from the mixture, which is then milled and put through paddle mixers, where moisture is added under controlled conditions.

A binder absorbs the moisture and the bound material is matured in bins for passing on to a pelletising disc, where 20 mm pellets are produced.

These pellets are preheated, sintered and sent to an 80-m-long rotary kiln, where a chemical reaction takes place between the chromite and the carbon in the pellets, and loaded into the furnace feed bins.

Further reduction is brought about by other raw materials being loaded with the pellets to control the slag chemistry and the chemistry of the ferrochrome product.

Four closed submerged arc furnaces, which make use of Soderberg electrodes, are tapped nine times a day, roughly every 2.5 hours.

Skimmers are used to separate the slag from the ferrochrome, with the option to tap into ladles and granulate, or tap the ferrochrome in sand ingots.

As part of the production process, ingots are removed by front-end loaders from the furnace, transported to the crusher plant and crushed and screened into the required size fractions and chemical compositions.

The screened ferrochrome is typically 80 mm in diameter, but also sized from fines to 40 mm, depending on the requirements of customers, from countries including the US, China and Japan.

Lion II The decision to build Lion I was taken in 2003 and the project was completed in 2006.

A Glencore Alloys project team managed both phases of the Lion project. Bulk earthworks at Lion 1 were completed in October 2004 and structures began rising out of the ground in November 2005.

Lion I was completed in September 2006 and the fourth furnace of Lion II at the end of May 2014.

Even though Lion II has been ramping up since the end of May, it has still to reach design capacity.

“We’re in a ramp-up and learning phase. We’re still some way from full capacity for both phases together. We will ramp up to full operating capacity by the middle of 2015,” Van Zyl explained to Mining Weekly.

Skills Development The group’s skills development centre develops the skills of the local communities to ensure a continuous availability of artisans for the company’s smelters.

The nine-classroom, 25-computer centre is able to host between 25 and 30 students and the workshop 150 engineering trainees.

The three main trades catered for are boilermaking, fitting and electrical.

Corporate Social Investment In addition to the skills development centre, Glencore has made contributions to communities located near Lion as part of its corporate social responsibility programme. This includes investments in areas such as housing and enterprise and social development. The smelter has over the past few years spent over R200-million in community development initiatives.