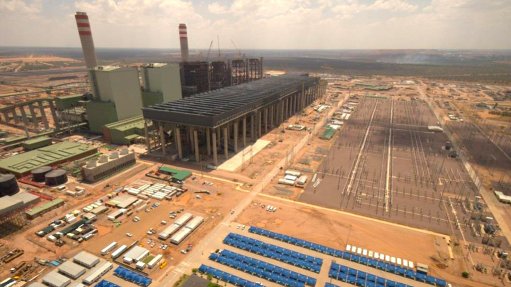 Medupi synchronisation said to be weeks away

Embattled power utility Eskom, which has been experiencing major delays and cost overruns at its two coal-fired megaprojects Medupi and Kusile, gave an assurance on Thursday that the synchronisation of Medupi Unit 6 is only weeks away, with pipe restoration work between the boiler and the turbine currently under way.

The June 2015 deadline has, therefore, been sustained as the date by which the 794 MW unit will officially enter commercial operation, notwithstanding the fact that the December 24 synchronisation deadline was missed.

The synchronisation milestone is achieved when the unit produces its first electricity, but it typically takes up to six months thereafter for a unit to reach full power and move into commercial operation.

However, Eskom also indicated that the first synchronisation of Kusile Unit 1 is now scheduled for the first half of 2017, with the 800 MW unit expected to enter commercial operations only in the second half of 2017.

The schedule for Kusile Unit 1, which was contained in CEO Tshediso Matona’s State of the System presentation, represents a major delay from earlier indications that the milestone could be achieved in the first half of 2016.

Eskom has not yet provided a firm schedule for the expected intervals for the ten other units at Medupi and Kusile, nor has it provided officially revised cost estimates for the projects.

In October last year, however, it refused to be drawn on an assertion by University of Cape Town Graduate School of Business Professor Anton Eberhard suggesting that there would be a two-and-a-half-year gap between the first two units at Medupi.

At the time the utility said the interval schedule was still being finalised, while acknowledging that the original commissioning intervals of six months between units was no longer feasible.

Matona drew a direct link between Eskom’s current financial and operational difficulties and the delays at Medupi and Kusile. He also confirmed that Eskom alone could no longer guarantee security of supply.

He also warned that the utility was likely to load shed on most days between now and the end of April, but that the risk would be reduced should it receive the R3-billion injection it is seeking from government to enable it to buy additional diesel for its open-cycle gas turbines.