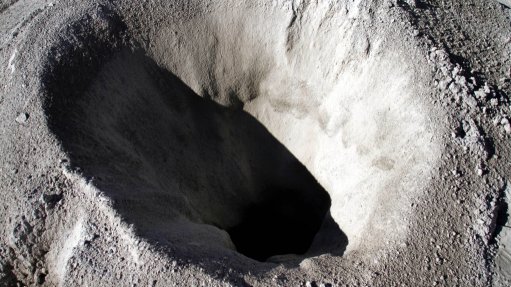 AEL group consulting mining engineer Simon Tose says the company is committed to mitigating the damage that the blasting process can cause to the environment, improving mineworker safety and enhancing the efficiency of the blasting process, “thereby improving the output and yield of mining operations”.

Tose explains that there has been a shift from dynamite cartridge blasting to the use of on-site chemical energy coupled with electronic blasting. This is because the latter method enables mining companies to have more control over blasting processes and the impact blasting has on the environment. He maintains that it makes the blasting process significantly safer and more efficient, while improving productivity.

Tose highlights the methods of rock- blasting applied through the ages, from fire- setting – heating the rock and pouring water on it to rapidly cool and then break it down – to the era of using dynamite.

“These haphazard methods of blasting presented risks, not only to the safety of mineworkers – because there was always the possibility of ground vibration and noise or fragmentation of the rock – but also to the environment,” he explains.

Tose says electronic blasting is applied in both surface and underground mining and provides mining companies with far more control over the environment. “This level of control is allowed because, through electronic blasting, one is able to manipulate the timing of the blast by blasting through one hole at a time, giving the user control over the air blast, ground vibration, noise and, most importantly, how the rock breaks or fragments,” he explains.

Tose asserts that mining is, by its nature, a risky operation, which is why developing ways to make the process safer and more efficient has been the main driver in continuously developing explosives and improving blasting processes.

Another important consideration, Tose highlights, is that with the electronic blasting system and manipulation of timing, a mining company is able to blast without undue noise, which also minimises rock vibration.

He stresses that AEL is committed to making strides in blasting safety. “One of the big innovations we are currently working on is the complete elimination of lead in the environment. Nitrates have a negative effect on the ground and, through the reduction of these elements, we will be able to reduce the impact of those chemicals on the ground.”

Tose adds that AEL is looking to make electronic blasting wireless in the future, which he says would give companies even more control over the environment and where blasting takes place.

“For South Africa to meet international safety standards, all stakeholders in the industry need to be aware of the progress that is currently being made and adopt new practices to improve their risk profile and reduce inefficiencies,” he concludes.