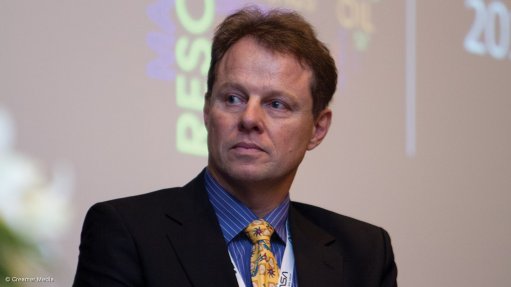 JOHANNESBURG (miningweekly.com) – The average price received for a diamond carat mined in the three months to August 30 was well down, Rockwell Diamonds reported on Monday.

The alluvial diamond mining company, listed on the Toronto and Johannesburg stock exchanges, averaged a 24%-lower $1 791/ct on market weakness and a sub-threshold recovery of larger stones at the newly acquired Remhoogte-Holsloot Complex, where a below-par $1 371/ct was averaged in the three months to August 30.

Total sales were down 28% to $9.6-million and a rough diamond inventory of 730 ct is being carried over into the three months to end December.

The downturn in global commodity markets also delayed the efforts of the company to raise equity financing, requiring a September 23 shareholder vote on the issuing of up to 31.8-million three-year warrants in settlement of a bridging loan.

The company, headed by CEO James Campbell, used cash flows to pay down $3.8-million of debt while keeping acquisition debt of $16.5-million in place for the immediate future.

Rebuilding the Middle Orange River footprint is progressing and exploration at Lanyonvale and Wouterspan is being speeded up.

While gravel processed was 15% down year-on-year on the closure of Niewejaarskraal, all three Remhoogte-Holsloot processing plants are now in operation, at an average grade of 0.9 carats per hundred cubic metres (cphm3).

Rockwell responded to a fatality at its newly acquired Remhoogte plant with the immediate cessation of operations and the company is continuing to provide the deceased’s family with support.

Saxendrift, which is being closely monitored for profitability as it approaches the end of its working life, processed lower volumes because of denser Rooikoppie gravels and the closure of Saxendrift Hill, but outperformed previous quarter volume and carat production targets, mining at a grade of 0.49 cphm3.

Buried middlings should provide Saxendrift with profitability until a replacement project – which is likely to be Wouterspan – is found that can make use of existing equipment and employees.

Diamond sales from Remhoogte-Holsloot amounted to $5.2-million from the sale of 3 052 ct, with the recorded average of $1 371/ct lower than historical values.