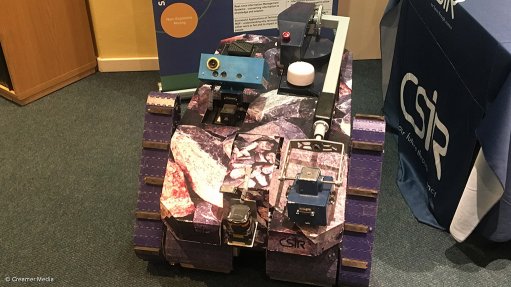 JOHANNESBURG (miningweekly.com) – It is unlikely that the mining industry will attain its goal of zero harm by 2020 and, as such, the Council for Scientific and Industrial Research (CSIR) has revealed some of the mine safety technologies it is developing and looking to commercialise.

Speaking at the Mandela Mining Precinct, on Tuesday, CSIR principal geophysicist Dr Michael van Schoor spoke about ground penetrating radar (GPR) and how it could be used to improve roof bolting applications, as well as detecting potential faults in the hanging wall.

He pointed out that 40% of all mine incidents resulted from fall of ground incidents.

With regard to general fault detection, he explained that GPR works similarly to speed traffic radar detection systems, as the GPR transmits a signal down into the ground and faults are mapped on a radargram based on the amplification and duration of the return signal.

Van Schoor added that the CSIR is developing the technology to produce three-dimensional maps which could be integrated, in real-time, to an existing mine plan.

Other technologies under development include an instrument called Rock Pulse, which is a device that can be attached to the rock to detect fracturing. Once the rock starts fracturing, the device alerts miners of a potential imminent collapse.

The device is meant to be used in close proximity to miners and should give miners at least 90 seconds to enable them to evacuate the area.

The device has been tested in coal mining applications, where rock fracturing is part of the mining process. It can, however, also be used for hard rock applications.

Further, he noted that the CSIR has developed a robot platform equipped with safety inspection sensors to enter mines during safety periods. The robot, called Monster, aims to assess and identify risks for underground mines, using thermal imaging and audio sensors.

CSIR principal researcher Dr Dave Roberts explained that the thermal imaging sensor could be used to detect loose rocks, based on the knowledge that loose rocks cool faster than the hanging wall because of the increased ventilation.

Davrajh noted that the sensor could detect temperature differences as small as 0.1 °C, and that the Monster could mark areas as potentially hazardous. The audio sensor works similarly to ‘tapping a watermelon to determine whether it is ripe’, he added.

The CSIR Monster prototype has been trialed at the precinct’s stope simulation, which has a decline of around 30°.

The event was attended by various stakeholders, including the Minerals Council South Africa, the departments of Science and Technology and Mineral Resources and representatives from industry, besides others.