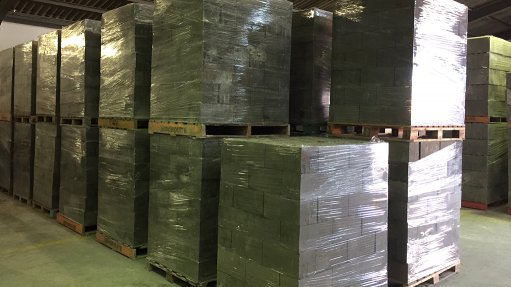 BRICKING IT Light weight, cost effective and insulated bricks are made from recycled polystyrene

A substantial portion of plastic waste is not recycled and ends up in landfills, contributing greatly to plastics being regarded as the biggest environmental threat, says industry body Plastics SA executive director Anton Hanekom.

Forty-three percent of recyclable plastic waste in South Africa during 2020 was lost, owing to its being contaminated before reaching the dump site where waste is recovered.

“The contamination occurs at source, when wet waste, such as food and organic materials, are mixed with recyclable materials, such as plastics, paper and metal,” he explains.

The contaminated recyclables are then merely compacted into the landfill and never recovered.

The current mandate of municipalities is to collect waste and take it to landfills, after which collectors have a brief window in which to cherry-pick recyclables from those landfills.

However, what is recovered is generally dirty and contaminated, consequently requiring extra washing and drying processes, which is not financially viable.

What the pickers can collect is sold to buy-back centres that, in turn, pick through the recyclables a second time before baling the product that will be delivered to recyclers.

Hanekom says the best way of mitigating such contamination is to have all waste separated at source.

“Plastics SA, as well as other notable environmental companies, is lobbying for municipalities to implement the ‘two-bag system’ in households,” Hanekom notes.

The system requires all households to separate wet waste from dry waste, after which the dry waste will be collected from residential areas and sent to sorting stations and recycled.

The wet waste can be compacted at a landfill, but the preferred option would be to use it, either in a biogas system for gas production or to make compost.

Plastics SA is in talks with residential waste picker representatives, as well as government, about formalising waste pickers’ role in the recycling process.

This will include having more smaller sorting stations at municipalities, where the waste pickers could sort the clean recyclables correctly.

Hanekom suggests an area be allocated where the waste can be offloaded and sorted, as well as a small office space with adequate ablutions: “An abandoned factory or building would be perfect for this purpose.”

The pickers can then dispatch the sorted recyclables to the relevant recycling plants, earning more money from the clean waste.

Additionally, small pilot pyrolysis plants can be installed at the sorting stations to incinerate any waste that cannot be reused or recycled to produce electricity and hot water for that specific station.

Hanekom tells Engineering News that another contributing factor to the country’s plastic waste and pollution is that about 39% of the population does not even have access to any waste removal services, with informal settlements and more rural areas representing “a noticeable void in the system”.

Many informal settlements are located along a water source, into which refuse is disposed, resulting in the waste being washed downstream into the ocean.

Hanekom urges that plastics must remain within the circular economy and not reach the environment.

Hanekom says Plastics SA is collaborating with bodies such as industrial research organisation Council for Scientific and Industrial Research (CSIR) on new and improved recycling technology.

“With the CSIR, we have looked at how to recycle or repurpose polystyrene,” he says, adding that a new method has been developed that entails adding polystyrene flakes to cement in brick manufacturing.

This not only results in a lightweight, durable and more cost-effective brick but also improves its insulation qualities.

Hanekom points out that the plastics and plastic product manufacturing processes are less hazardous to the environment that those of other products with the same or similar purpose.

“Contrary to popular belief, plastic has been scientifically proven to be one of the most environment-friendly packaging materials,” he stresses.

“But as an end-product, and largely because it is lightweight, floats and is visible, it has been identified as one of the major pollutants, which is somewhat unfair because it has enormous reusable benefits.”

He adds that only 22% of all locally manufactured plastic products were recycled into material for the market, but the industry believes that volumes will increase in time.

“Over the past five years, we have definitely seen a greater awareness around the need for recycling and an embrace of the circular economy.”

Hanekom attributes the heightened awareness to ongoing marketing and educational campaigns, especially those about plastic, which have raised awareness of the dangers of littering and the importance of recycling.

“However, Plastics SA and government need to continue with these efforts to change the traditional, linear mindsets of ‘use and dispose’ so that we can keep materials in the value chain for as long as possible,” he concludes.

To watch a video in which Plastics SA executive director Anton Hanekom discusses the circular economy and how plastic must maintain its position in it, instead of being discarded, or landing up in landfill or the environment, scan the barcode with your phone’s QR reader or go to 'Video Reports’ on www.engineeringnews.co.za/ Camerawork: Halima Frost. Editing: Darlene Creamer. Recorded: 02.09.2022