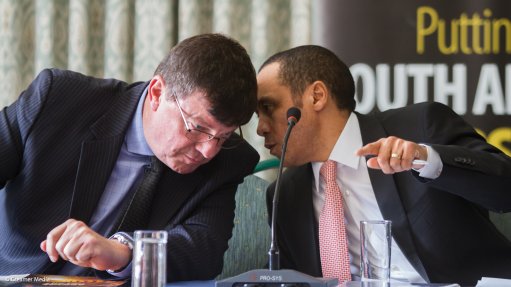 JOHANNESBURG (miningweekly.com) – The Chamber of Mines of South Africa on Wednesday revealed a strategic plan to get South Africa’s “great mining industry” back on the front foot.

In order to get this investment, South Africa needed to create a stable, competitive and predictable policy, legislative and operating environment that would unlock optimum value from its vast mineral resources.

He urged Parliament to deal with the Mineral and Petroleum Resources Development Act (MPRDA) Amendment Bill on an expeditious basis and to ensure that the outcome supported a vibrant and competitive mining sector.

Trying to force mining companies to sell minerals in the domestic market at developmental prices would damage the already strained mining sector, and probably do little to help the downstream sectors.

Resolving these types of issues would help to restore confidence and improve investment attractiveness.

“We need to deal with and get certainty on the Mining Charter so that we can continue with the transformation programme,” said Teke, who added that the agreed pursuit of a declaratory order of court on the once empowered, always empowered issue remained key to creating certainty in the interpretation of the ownership element of the charter.

Teke, 50, seized on an earlier outline of Project Phakisa, or Operation Hurry Up, by Department of Mineral Resources deputy director-general of regulation Joel Raphela to emphasise that the success of this initiative - which aims to realise the mining sector’s full gross domestic product potential in the shortest possible time - hinged on full government-industry cooperation and collaboration.

Even though the mining industry faced hugely challenging short-term headwinds, Teke committed the chamber to working more assertively towards achieving a new “social and economic pact” for mining.

“We want to get this great industry back on to the front foot, and to double real investment in mining by 2030,” he added. (Also watch attached video produced by Creamer Media’s Mining Weekly Online).

While South Africa was the most industrialised country in Africa through mining, “it’s the future that we really should be focusing on building together”, Baxter urged.

Raphela, who was deputising for Minerals Minister Ngoako Ramatlhodi, said he was mindful of the need for the mining industry to move forward and to place its energies in the service of the creation of a brighter future.

The sector should learn from the collaboration that had achieved such great success in health and safety, which had seen fatalities plummet 86% from 615 in 1993 to 84 in 2014, mining's safest year on record.

Raphela said the government was well aware of the need for regulatory certainty in an industry that required long-term investment, which was why the finalisation of the MPRDA Amendment Bill, which had been referred back to Parliament, remained a government priority.

He was also confident that the Parliamentary process would allow stakeholders to engage the Bill and promised departmental support to those wishing to do so.

On Mining Charter compliance, Teke said that the chamber was confidently able to reiterate that the average black economic-empowerment (BEE) ownership of its members of 38% was 12% higher than the mandatory requirement and that more than R159-billion in net value had been transferred to BEE beneficiaries in the past 12 years.

“The mining industry has done more for transformation than any other component of the private sector since the advent of democracy.

“What we are seeking is a fair reflection of the progress made and we need to celebrate successes and work together to resolve challenging areas,” said Teke, who added that the AGM was taking place at a time of depressed commodity prices, rapidly escalating costs, electricity supply challenges and continued uncertainty regarding some parts of South Africa’s mining and transformation laws.