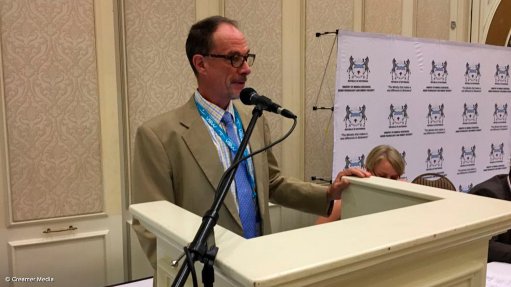 GABORONE (miningweekly.com) – Botswana’s diamond sector is not going to disappear but it is also not going to grow.

The era of Botswana being a mining driven economy had ended and foreign direct investment (FDI) into Botswana had collapsed, falling to below 2% of gross domestic product (GDP) in the last couple of years from 6% and 7% a year in the early 2000s.

“This is pretty disastrous, because we really need FDI and we have an FDI problem,” Jefferis told the conference attended by Mining Weekly Online.

Some 20 000 people were entering the labour market each year, but only 2 000 jobs a year were being created, with capital-intensive mining doing little on the jobs front.

Although mining had declined, Jefferis was not negative on mining, citing it as having an important economic role to play going forward.

“But we have to be realistic about what’s going to bring to the economy. The future of mining is not going to be like the huge cash cow it was in the past. Mining is risky and risk means there will be successes and failures,” he said, pointing to mine closures in the last two years.

Diamonds exports, including aggregation, were still representing the overwhelming 74% of exports and the 20% unemployment rate was probably under recorded.

“Diamond sales have been very volatile,” Jefferis said of the ten diamond sights a year, which he described as being “very bad” in 2014/15, when Debswana was producing more diamonds than it could sell, despite the cutbacks in production.

However, recovery was good in 2016/17, with diamond mining, over the years, contributing of 30% to Botswana’s gross domestic product (GDP) on average.

Jefferis made the point that exports were far less diversified and over a 25-year period, exports had hardly diversified at all and were still diamond dependent to an extent of 66% last year.

Botswana also exports copper, nickel, gold, soda ash and beef, but in significantly lesser volume than diamonds, which has major implications in an ex growth scenario.

“Even if we produce 25-million carats a year forever, the growth rate is zero, and at best we’ll plateau, and the diamond industry will not contribute to economic growth on that basis,” the former deputy governor of the Bank of Botswana reported.

Since 1990, Botswana’s growth has been slowing to around an average real GDP growth of 4% a year and, with the population growth at around 2% a year, it would take 35 years to double per capita income.

Going forward, the country needed large infrastructure investments, including in railways and ports.

If coal bed methane’s (CBM's) future was going to be realised, transmission would be required, and for mining to go ahead, additional water infrastructure would be essential.

Financing of infrastructure would have to be a combination of private sector and public sector inputs.

Beneficiation had been moderately successful in the diamond sector, with cutting and polishing being for less successful than going downstream in diamond sorting, aggregating and trading.

The attempt to produce glass from soda ash had been a disaster.

There was one policy commitment to produce less carbon dioxide and another to build more coal-fired power stations, which were in conflict.

On a more practical level, the biggest obstacle to obtaining private sector finances was the government’s struggle to come up with power purchase agreements.