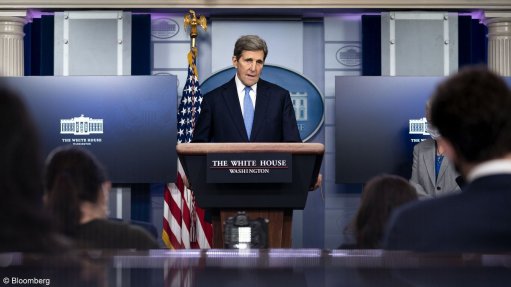 John Kerry, special presidential envoy for climate, during a news conference at the White House on Wednesday.

Oil and gas companies knew they would face a fight with President Joe Biden, who had campaigned on tackling climate change. Nobody expected fossil fuel to come under such an immediate attack.

Biden didn’t quietly sidetrack the Keystone XL pipeline with legal maneuvers. The new president yanked the permit on his very first day in office, blocking a project that would have delivered crude from Alberta’s oil sands before even speaking to Canadian Prime Minister Justin Trudeau.

He didn’t simply rejoin the Paris climate pact, as he promised during the campaign, but had his climate adviser, Gina McCarthy, commit Wednesday to “the most aggressive” carbon cut the US can make. That came just before Biden signed a climate-related executive order suspending new oil and gas leases on public lands, directing federal agencies to purchase electric cars by the thousands and seeking to end fossil-fuel subsidies.

It all left the oil industry stunned on what the Biden team had pitched as Climate Day. Fossil fuel stocks have plunged on his actions, and banks including Goldman Sachs Group have warned of a drop in US crude supplies. “The industry is aghast at these changes,” Dan Eberhart, chief executive of oil-field services company Canary Drilling Services, said in an interview. “They are more direct, more fierce and quicker than what folks expected.”

Taken together, Biden has moved faster on climate and clean energy than his former boss, President Barack Obama, who took office in 2009 under the strain of a similarly severe economic crisis. More orders will likely follow, along with legislation. Biden’s actions to date, and his far-reaching goals, reflect how much has changed in last the four years. While the Obama era ended with a fracking boom that transformed the US as a top energy exporter, the Biden era has started with sharp moves against fossil fuel.

Next Biden wants to eliminate net greenhouse gas emissions from power plants by 2035, a timetable some utility executives consider too difficult and expensive to meet. Climate activists are now waging a “war on gas", fighting pipelines and pushing cities to ban the fuel’s use in new buildings—and Biden’s early moves align with these goals.

“In my view we’ve already waited too long to deal with this climate crisis,” Biden said in his speech Wednesday that elevated global heating to an “existential threat” with national security consequences. His immediate actions will make easier the job of his climate envoy, former Secretary of State John Kerry, as the US seeks to regain the respect and trust of world and re-establish itself as a climate leader. On Wednesday, Kerry expounded on the new administration’s policies in a video address to members the World Economic Forum on Wednesday, warning that gas pipelines risk becoming “stranded assets” in three decades or less.

While some executives may balk at Biden’s timeline, large utility companies have been making their own public plans to neutralize their carbon emissions by mid-century. This group includes Duke Energy and Dominion Energy, giant companies with much at stake under Biden’s climate agenda.

Biden is also weaving climate considerations into decision-making across the federal government, not just a handful of departments, under an order signed Wednesday that makes global warming a pillar of US policy in both foreign and national affairs. His directives established a National Climate Task Force, with members drawn from 21 federal departments and agencies. The Center for Climate and Energy Solutions nonprofit group, said Biden’s order demonstrate a “whole-of-government approach to tackling the climate challenge.”

Many clean-energy companies prospered during President Donald Trump’s tenure, despite his oil-friendly policies and his promised to exalt America’s fossil fuel “energy dominance.” In less than a month under the Biden administration, the speed and range of policy moves appear to be a huge potential boost, both for their industry and the jobs it can provide. Wielding the federal government’s vast purchasing power to buy carbon-free electricity and zero-emission vehicles made in the US now promise additional inputs for surging growth. Americans bought or leased 172 000 electric cars in the first three quarters of 2020, compared to 235 000 for all of the previous year, according to data from BloombergNEF.

“I’ve always said that clean energy growth is inevitable, but the speed, scale and equity of that growth is driven by policy investment,” said Abigail Ross Hopper, president of the Solar Energy Industries Association lobbying group. The US installed more than 14.5 gigawatts of solar power in 2020, according to BloombergNEF, up from 25% from the year before. Clean-energy firms that went relatively unknown for years have soared since Biden’s election, with many now selling more shares than ever to capitalize on the moment.

Oil and gas companies warn their own industry’s jobs will be sacrificed in the process, at a time when the coronavirus pandemic has already crippled the US economy. Biden’s speech on Wednesday sought to address those anxieties. “They helped build this country,” he said of fossil-fuel workers. “We’re never going to forget the men and women who dug the coal and built the nation. We're going to do right by them, make sure they have opportunities to keep building the nation in their own communities and getting paid well for it.”

But those promises won’t mask the risks facing large parts of the economy. “A federal leasing moratorium is effectively a blockade around New Mexico’s economy,” said Ryan Flynn, president of the New Mexico Oil & Gas Association, in statement predicting a rise in unemployment coupled with falling state revenue.

To climate advocates, however, the lease moratorium comes as a needed correction after the Trump administration tried to open up more of the country and its coastal waters to drilling. Biden on his first day signed an order suspending oil and gas leasing in the Arctic National Wildlife Refuge—a move that followed on the heels of the Trump administration finalizing nine leases there.

“After years of giving away oil and gas leases at fire-sale prices, tapping the brakes is a sensible and necessary step,” said Fred Krupp, president of the Environmental Defense Fund nonprofit group. “With industry already sitting on more than 13-million acres of idle oil and gas leases, claims that a pause on leasing will cause economic harm stretch all credulity.”