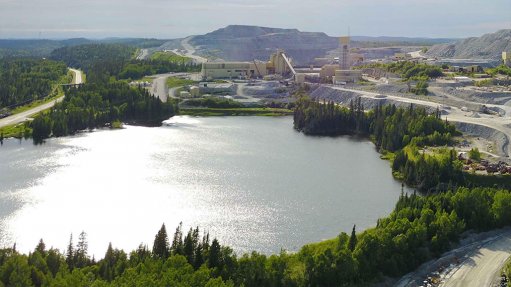 Barrick's Hemlo mine, in Canada.

Miner Barrick Gold said on Thursday that it remained on track to achieve its 4.4-million- to 4.7-million-ounce production target for the year, with all regions, except for North America, trending at the higher end of their regional guidance.

North America’s gold output, however, was trending at the lower end of the regional guidance, the NYSE- and TSX-listed company reported, stating that the Hemlo mine, in Canada, and the Turquoise Ridge mine, in the US, would miss their yearly guidance range.

Production at Turquoise Ridge, also part of the NGM venture with Newmont, would be below its yearly guidance range, although output would still be higher than the prior year, Barrick stated.

Reporting its preliminary third-quarter production results, the group said that its gold output increased quarter-on-quarter, with improved performance at NGM following planned maintenance shutdowns in the previous quarter, the continuing ramp-up of operations at Bulyanhulu, in Tanzania, and improved performance at Veladero, in Argentina.

Preliminary third-quarter copper production was higher than in the second quarter, and the fourth quarter was expected to be the strongest quarter of the year, mainly driven by higher grades from Lumwana, in Zambia.